The 30May2022 storm over Delhi which gave No Warning

Yesterday (30May2022) at around 4pm a fierce storm hit Delhi and parts of the NCR causing two fatalities and quite a bit of damage. 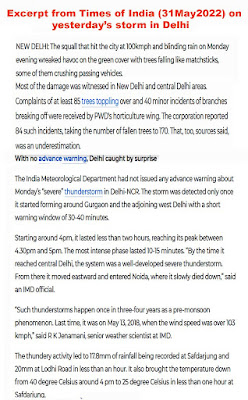 Also placed below are satellite IR images from IMD from 2.15pm which clearly shows clouding due west of Delhi intensifying and moving east until it envelopes the entire NCR and moves further east

A senior meteorologist has this explanation
'Yesterday's(30May2022) Thunderstorm was expected for Delhi under the influence of induced circulation and trough. WD was moving at higher latitude.
It was difficult to pinpoint the onset timing. However morning forecast was for duration 1700 to 2000h.
At 1442 IST doppler radar shown formation of convective cells 70-80Km south of Delhi. After 10 minutes a cell formed west of Delhi at 70Km distance. The expected speed of movement was 70Km/hr. So the strike time for Palam is around 1600h.
Thus it gave very short notice than we would have loved.
Satellite images are more than half an hour delayed image hardly can be used for pinpointed forecast. Doppler radar delay time is about 15 min'

Posted by SaveTheHills at 4:38 PM