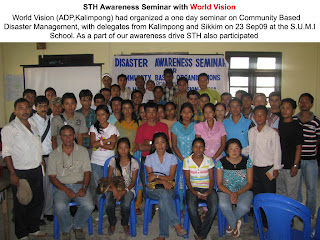 Praful Rao
Posted by SaveTheHills at 4:55 PM No comments: 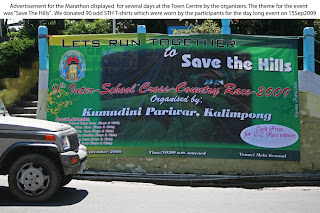 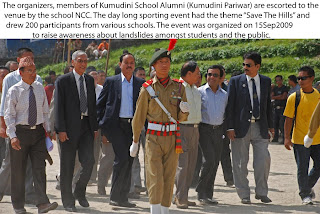 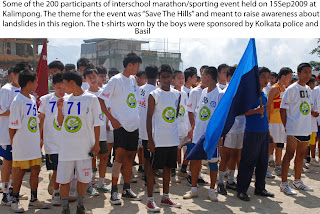 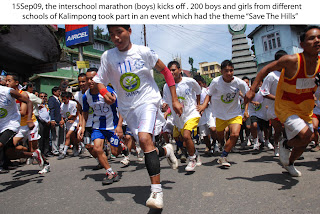 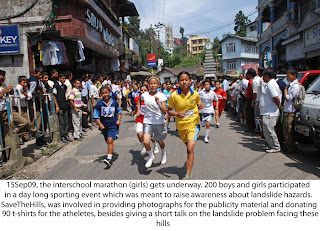 On 14 Sep2009, SaveTheHills was 2 years old.
As if to celebrate this "Kumudini Pariwar", the alumni of Kumudini Homes, an old and venerable institution of Kalimpong held a one day sporting event and a marathon on 15Sep2009 with the theme "Let's Run to Save The Hills". The event was intended to raise awareness about landslides amongst the public and students and had 200 students from different schools of the sub-division participating.
I would like to thank Kumudini Pariwar for the event and also Kolkata Police and Basil India for the 90 odd "Save The Hills" t -shirts which we distributed amongst the participating athletes.
Posted by SaveTheHills at 9:06 AM No comments:

Is this Climate Change? Extraordinary Rainfall of Aug2009 in Kalimpong

August2008 was a great month as far a rain and landslides went; not so this year.
In August 2009, even though we received just about the monthly average rainfall (approx 630mm ie 10mm short of the monthly average) what went wrong was that in just two days (15Aug2009 and 19Aug2009) we received more than 55% of the total monthly rainfall.
This extraordinary volume and intensity of rainfall caused widespread and huge damage in Kalimpong subdivision and much of which is documented in the blog.
So climate change may not be something which we read about in some environmental magazine or see on CNN - maybe it is happening in our midst. 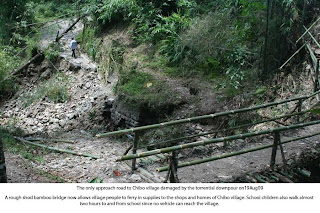 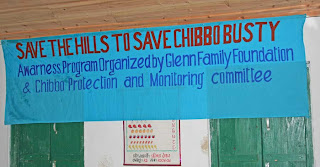 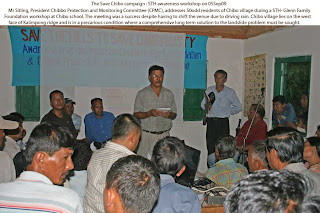 An excerpt from the Telegraph of 07Sep09

Kalimpong, Sept. 7: The damage caused by the monsoon to Chibbo busti and its adjoining areas on the outskirts of the town has raised fear of relocation among its 10,000-odd residents.
The entire area from Durpin on the top to Poshyor below has turned into a sinking zone, thanks to the rains. The heavy downpour of August 15 and 19 in particular caused major damage in the area.
In fact, the road link to both Upper and Lower Chibbo villages has been snapped since the night of August 19. It will take months to restore the link as a huge portion of the road has been washed away by a landslide at Upper Chibbo. Three vehicles have been stuck in the village since then. The local people have erected a makeshift bamboo bridge that can only be crossed on foot. Chibbo though is not a remote village but almost a suburb and adjoins Wards 17 and 19 of the municipality.
So alarmed are the people of the area that recently they formed the Chibbo Protection and Monitoring Committee (CPMC) to spread awareness about their plight. “The entire area is sinking. We either have to leave and relocate elsewhere or the government must put in place a comprehensive plan to save the area from impending doom,” said Suren Pandey, the CPMC spokesperson.
The CPMC has also joined hands with SaveTheHills, a local NGO engaged in espousing the landslide issue, to help project their case to the world, including the government agencies. “If we don’t act now, we will be perished. It is not only Chibbo which is under threat, but also the adjoining areas like Wards 17 and 19, Tanekbusti, Poshyor, 3 Mile and 4 Mile,” said Pandey.
Praful Rao, the NGO president, has admitted that the entire western face of the town has become very unstable. “A combination of various factors like lack of proper drainage and anthropogenic causes have accelerated the degeneration to an alarming rate where if no long-term solution is sought, the prospect of relocating everyone in Chibbo-Poshyor becomes very real,” he said.
Bengal home secretary Ardhendu Sen, who was here on August 27, stressed the need for a thorough study on the hills before a master plan is prepared to battle landslides. “We will have to identify an agency which can do the job and take the help of engineering colleges and universities,” Sen had said in a meeting with the NGO and senior officials.
Today, Rao echoed Sen. A comprehensive study of the area was needed to find a long-term solution to the problem, he said.“I know this will require time and money, but half-hearted and piecemeal actions in the present situation will be of no help.”
___________________________________________
Comments by Praful Rao
Chibo- Pashyor have been featured earlier on the blog and lie on the west face of Kalimpong. The stop -gap, quick fix landslide prevention work which have been resorted to in this area for decades has only spelt doom for this entire region. Many parts of this village are now in a precarious state - the trouble is that this area is now densely populated.

My thanx to Ms Aachal Tamang for the photos

Posted by SaveTheHills at 6:08 AM No comments: 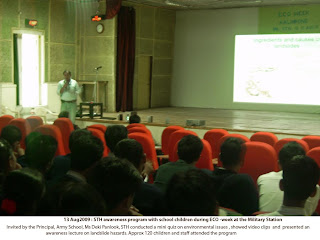 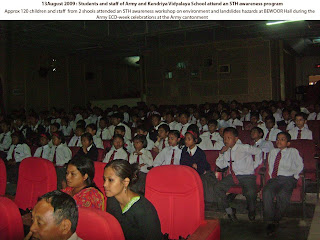 Besides acting as a pressure group to have landslide prevention work initiated, one of STH's primary roles has been to raise awareness about landslides. To this end, we have carried out extensive work amongst students who are our primary target and then amongst a varied cross-section of people which includes University lecturers, Police and Army officers, villagers and urban folk.
I am glad to say that 2 years and 20 programs down the line, awareness has become so much more acute here and not a week goes by without some sort of activity taking place about landslide hazards.
In the future, we have some big programs looming up plus an Inter-School Marathon being organized with the theme "SaveThe Hills" in the next week.

Praful Rao
Posted by SaveTheHills at 7:32 AM No comments: