Studies done by Dr David Petley of Durham University (UK) have revealed that the number of deaths caused by landslides is almost ten time more than previous estimates.
Stating that "global loss of life from landslides is poorly quantified", Dr Petley's study done over a seven year period (2004-2010) has found that as many as 32,322 people may have perished in 2620 fatal landslides during this time as against an earlier estimate of 3000-7,000.
Quoting Dr Petley, "The upshot is a lack of quantification and thus appreciation of the true impacts of landslides, resulting in poor prioritization of global-scale landslide research and mitigation".
What should worry those of us living the Himalayas is that in the above map showing the spatial distribution of fatal landslides, the cluster of black dots is the thickest in our region (ie "Along the southern edge of the Himalayan Arc"), yet our efforts towards managing this disaster form remains largely academic (being confined to the hallowed confines of IITs and other scientific institutions/departments) with virtually no work being done at the grassroots level ie where the landslides are killing people.

STH would like to thank Dr David Petley for sharing  his article entitiled "Global patterns of loss of life from landslides" article with us.
Posted by SaveTheHills at 8:47 AM No comments:

The good and bad news : El Nino is around. 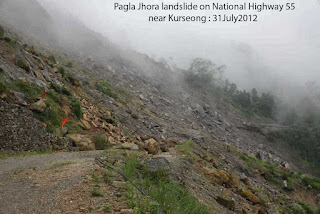 It is now official that El Nino conditions will prevail over the the northern hemisphere at least until Nov2012 and it is widely speculated that this will lead to a shortfall in rainfall in India even as the south westerly monsoon slowly withdraws from the sub-continent.
As if to prove this point, we are experiencing extraordinary weather in this part of world with rainfall again running woefully short in Aug2012 (we had deficient rain in May & Jun2012) and with no major weather system (ie formation of low pressure/depression or cyclone) developing in the Bay of Bengal thus far in 2012.
Whereas this maybe good news as regards landslides in this region (we had no major landslides or casualties except for the Tindharia and Pagla Jhora slides), I shudder to think of what it portends for our drinking water and power situation in the summer of 2013 (not to mention impact on agri/horticulture over the winter months etc).

As usual Kurseong took the first place with a whopping 125cm of rainfall, whereas at both Darjeeling and Kalimpong the rainfall was more subdued.
No major landslide was reported in July2012 in this region and there were no fatalities