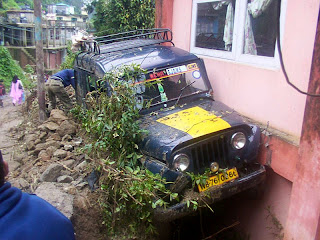 Source:
“Down to Earth”

INDISCRIMINATE tree felling, construction, mining and quarrying, combined with heavy rainfall, have increased the fragility of the Himalayan mountains, leading to an increase in the incidence of landslides in the region. Of all the world's landslides, 30 per cent occur in the Himalaya, according to a South Asian Association for Regional Cooperation (SAARC) study on the causes and consequences of natural disasters in the region and the protection and preservation of the environment.

The study, based on official reports, notes an average of about 75 major landslides occur annually in just central and western Nepal and this costs the country about $130,000 in damages to land and cattle alone.

The Nepalese government believes that indiscriminate mining and ill-planned road building are to blame for the widespread wastage of land resources, which forces rural communities to encroach into forests and further aggravates soil erosion. However, not all experts agree with this conclusion. Numerous studies argue that natural processes play a far greater role in the Himalayan region in causing landslides than human-induced ones.

In Sri Lanka, too, the government believes that landslides are increasing largely because of development projects that have spread even to steep hill slopes and other unstable locations in the country's central and southwestern regions. More intensive cultivation, which means more irrigation and more denudation of watersheds, also is being blamed.

Monsoon- and cyclone-induced rainfall are said to be major causes of landslides and land collapses, including riverbank erosion, in Bangladesh's hill districts, particularly the Chittagong region and parts of Sylhet. Experts say there is urgent need for a sound land-use policy in a land-hungry country like Bangladesh, if a halt is to be put to indiscriminate cutting of forests and poorly planned roads.

During the rainy season in Pakistan, landslides along highways in the Murree hills, Pir Panjal and the Hindu Kush are also triggered by dam construction and open-pit mining.

The above article and many more can be found here
(http://www.indiaenvironmentportal.org.in/category/thesaurus/climate-change/natural-disasters/landslides?page=11)

praful rao
Posted by SaveTheHills at 7:38 PM No comments:

23Mar2009: Seminar at the Centre of Himalayan Studies (Univ of North Bengal) 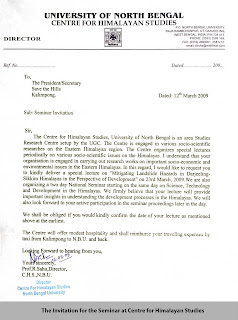 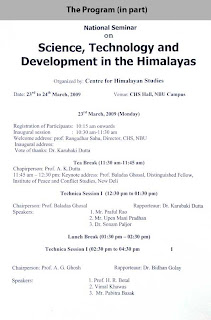 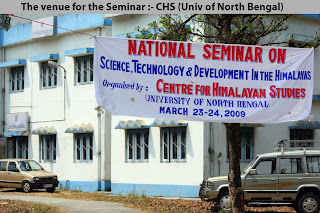 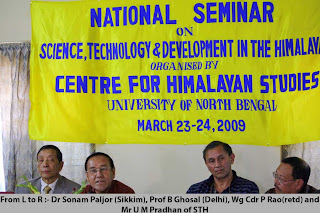 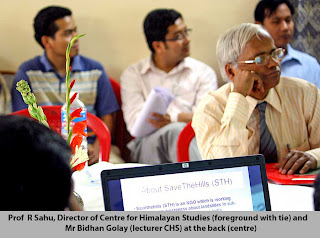 Several days ago I received an invitation from Prof R Sahu, Director of Centre for Himalayan Studies (CHS) , University of North Bengal , Siliguri for a seminar at the university and yesterday STH was represented in full force at the CHS. The speakers from STH were Er Mr U M Pradhan and the undersigned. It was good to be there in such an august gathering and we certainly look forward to much more interaction with CHS, NBU.

A voice from the wilderness ...Balasun 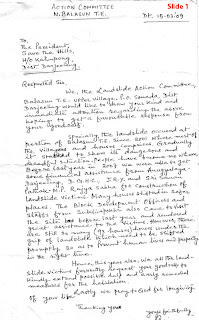 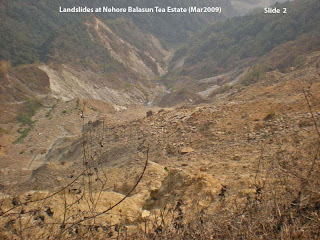 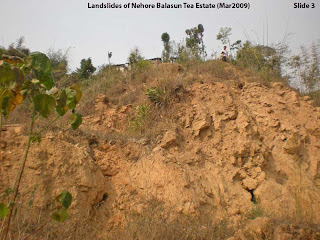 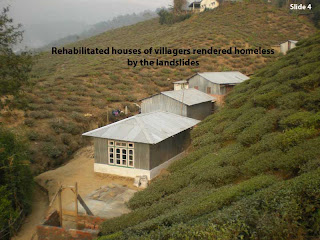 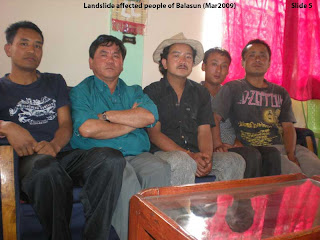 Nehore Balasun Tea Estate (T.E) is a part of Sukhia Block, Darjeeling Subdivision, Darjeeling District. Landslides have affected this area since 1998 and where there were once orange orchards and extensive forestation there is now only dusty, crumbling slopes - landslides have devoured the orchards, parts of the T.E and homesteads.
In the past 77 families had to be shifted from their homes and rehabilitated and this year a further 88 families may have to follow the same fate in the most affected villages of Babu and Siran Gaon.
Though geological surveys have been carried out and officials of the state govt have visited the area nothing has been done by way to trying to control this devastation or manage the landslide.
So as of now, the letter addressed to me is just another voice in the wilderness...
and I wonder just who is listening?

For those interested, Balasun landslides have been featured on this blog earlier on 18Feb2008 and 04Oct2007

Praful Rao
Posted by SaveTheHills at 6:13 AM 2 comments: 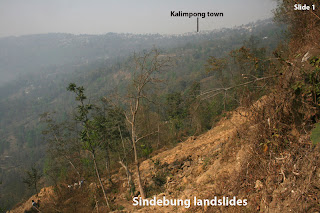 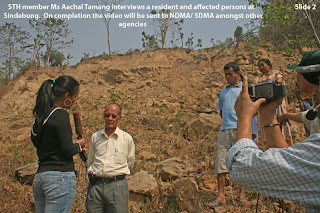 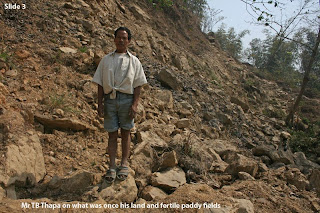 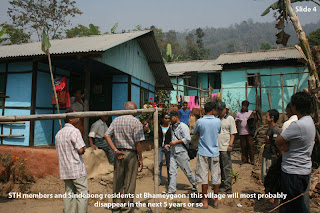 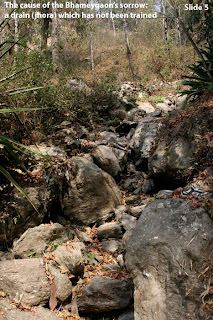 Landslide fear stalks hill village
RAJEEV RAVIDAS
Kalimpong, March 13: Seventeen families in Sindebong have been displaced by landslides in the past three years and are yet to be rehabilitated. Fifteen more families fear they may suffer the same fate.

The displacements have taken place mostly in Bhameygaon in the Sindebong gram panchayat: result of landslides that started in the nineties. “The disaster may happen every year as there is hardly any effort to check the calamity. Not only that, a major part of Kalimpong town is likely to be affected by the slides,” said Praful Rao, the president of Save The Hills, an NGO working on landslides.
Bhameygaon is only 5km from Kalimpong town.
Dilip Bhujel, who had once lived in Bhameygaon, claimed that a Geological Survey of India study in 2006 had said the landslides, if unchecked, would wreck havoc across 524 hectares hitting right up to Dr Graham’s Homes atop the hill. “Ten villages fall in the gram panchayat area. This means 788 families are at risk. Since then, we have been spending sleepless nights,” said Bhujel, who shifted to Gairigaon, 1.5km from the landslide-hit zone, out of fear.
Gopal Chhetri, who lost his house and 0.1 acre of land in the landslide of 2007, has been staying with his family under a shed on property owned by another villager. “We are yet to receive any help from the government. I somehow make ends meet by working as a day labourer. Now even my neighbour wants me to look for another place,” said the 57-year-old. His neighbour, Tek Bahadur Thapa, too, lost an equal area of land the same year.
Save The Hills is making a documentary to highlight the landslides in Sindebong. “Lack of drainage, coupled with a large number of jhoras (small streams) criss-crossing the area, is the cause of landslides. These jhoras have neither been widened nor strengthened,” said Rao.
Officials of the Kalimpong block I — Sindebong gram panchayat falls under it — said they were too tied up with election-related work to look up the records of the relief provided to the affected villagers. “We will let you know the statistics later,” one of them said.
Having failed to move the authorities, the villagers are now hoping for divine intervention. “Three years ago, we set up a devi (goddess) mandir near the landslide-hit zone in the hope that she will protect us from the danger,” said Bhujel.
__________________________
Comment by Praful Rao
STH members visited Sindebung (our third visit) in pursuance of our annual program - to make a video on the landslide hazards in this area. Many affected people were interviewed and the landslide areas filmed. On completion the video will be sent to the National/ State Disaster Management Authorities as well local govt officials in charge of Disaster Management.

Posted by SaveTheHills at 6:22 AM No comments: 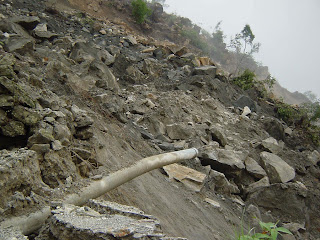 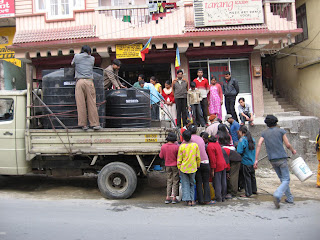 My thanx to
Ms Mita Zulca, prominent publisher of Gangtok, Sikkim and Mr Sagar Chhetri of "NOW", a daily from Gangtok for the photos.
While bringing you these images, STH has networked with NGOs / mediagroups and private citizens to TRY and publish and catalogue reports/ photographs of landslides as they occur in the Darjeeling/ Sikkim region. I do hope we succeed!

praful rao
Posted by SaveTheHills at 6:09 AM No comments:

From the newspapers today

Anthropogenic landslides.
"These are a cause of great concern, especially in areas of rapid growth in which cities are rapidly expanding. I fear that we will see a legacy of landslides in the urban areas of Asia over the next decade as a result of the incredible rate of urbanisation in Asia." 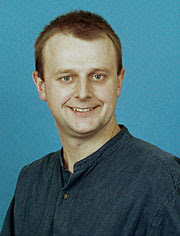 An Excerpt from the Telegraph today


praful rao
Posted by SaveTheHills at 7:30 AM No comments: