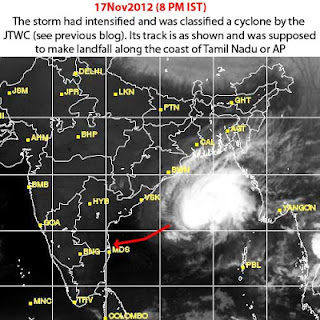 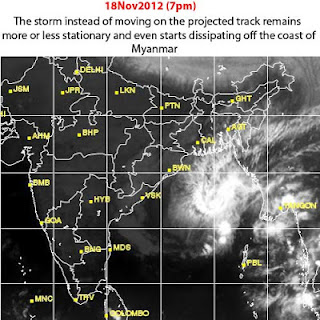 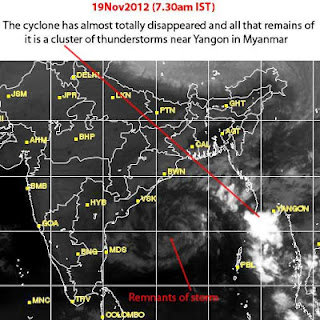 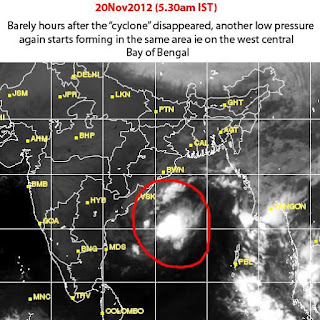 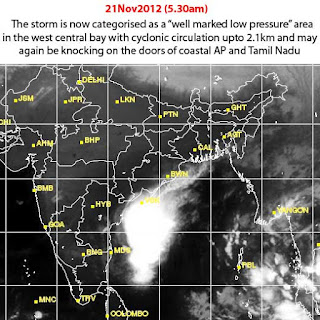 It has been fascinating to watch the waxing and waning of the above storm over the past week (see previous blog entries to follow positions of the storm) and whereas storm track predictions may still be inexact what is possible today is that based on IR imagery, communities can keep a watch on major storm systems and be forewarned about impending weather related disasters well in advance.
All the above IR imagery has been obtained from here

Posted by SaveTheHills at 8:31 AM No comments: 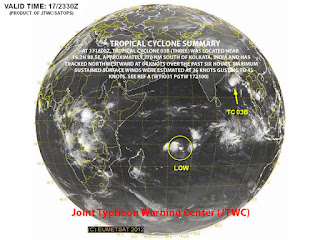 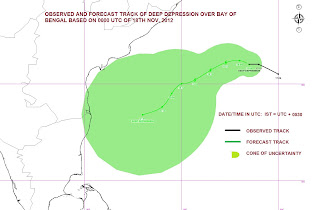 The US Navy's Joint Typhoon Warning Center has upgraded the storm last evening and is now named as Tropical Cyclone 03 (see top).
IMD cyclone page has posted a forecast track image and shows the storm veering away from its earlier NW track to a South westerly path.

Praful Rao
Posted by SaveTheHills at 8:04 AM No comments:

The Low Pressure is upgraded to a Depression

Latest satellite imagery and current Buoy observations indicate that a depression has formed over east central Bay of Bengal and lay centred at 1130 hrs IST of today, the 17thth November 2012 near latitude 15.50N and longitude 90.00E, about 1050 km east-northeast of Chennai (Tamilnadu), 750 km east-southeast of Visakhapatnam and 650 km southeast of Paradip.

The system would intensify into a deep depression and move slowly northwestwards during next 24 hrs. It would move west/west-southwestwards towards south Andhra Pradesh and north Tamil Nadu coasts during subsequent 48 hrs.
Under the influence of this system, rainfall at most places with isolated heavy rainfall would occur over Andaman and Nicobar Islands during next 24 hrs.

No adverse weather is likely along and off east coast of India during next 48 hrs. However, Fishermen along north Tamil Nadu and Andhra Pradesh coasts are advised to be cautious while venturing into sea during this period.
The next bulletin will be issued at 2030 hrs IST of today, the 17th November, 2012 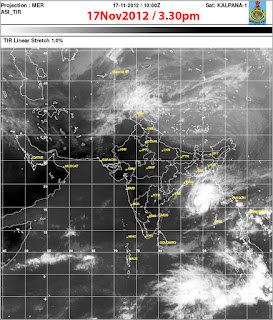 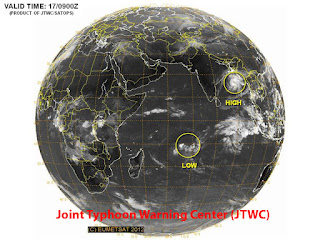 You can read the next bulletin here
Praful Rao
Posted by SaveTheHills at 4:42 PM No comments: 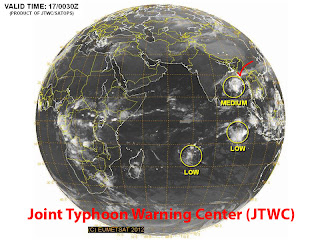 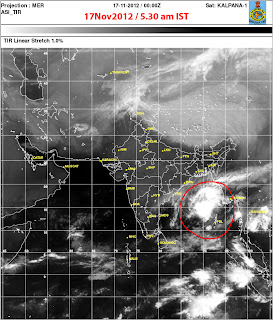 On 13Nov2012 STH reported the formation of a low pressure in the Bay of Bengal; today the storm has intensified into a "well-marked low with an associated cyclonic circulation upto 3.6km".
The storm which is also being reported by the U.S Navy's Joint Typhoon Warning Center is likely to intensify further.

For anyone interested in knowing how severe weather systems are classified :- 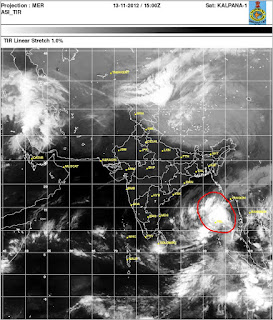 Rather late in the year but yet another storm is brewing off the coast of Myanmar and we are keeping an eye on it....

Posted by SaveTheHills at 10:57 PM No comments:

Visit NBCNews.com for breaking news, world news, and news about the economy
Posted by SaveTheHills at 6:44 PM No comments:

Needed, a permanent solution
(Editorial on The Hindu is here)
As if the flooding in Andhra Pradesh following the severe cyclonic storm ‘Nilam’ was not bad enough, the State government and the Indian Meteorological Department are now arguing over what actually happened. Was the flood just the aftermath following the landfall of ‘Nilam’ or did a fresh low pressure system ravage coastal Andhra? The State administration has taken on the IMD for not warning it about the low pressure in the Bay of Bengal immediately following the storm but the met office says it did not have any information to share. The other point that has come up is that the department is better equipped to handle the Southwest monsoon and not the Northeast. But the damage has been done and at least eight districts of Andhra Pradesh — with Visakhapatnam and Srikakulam bearing the brunt — were left floating for days before the flood waters drained off. More than the warning or the rains, it is the lack of a proper drainage system along the east coast that led to such a tragedy, claiming over 20 lives and causing extensive damage to property and crops alike. And this damage can be prevented.

This is the sort of question the National Disaster Management Authority should start grappling with. NDMA teams visited the coastal States ahead of the monsoon and reviewed the preparedness of the administration in each of them. When the floods were in full flow, special teams of trained experts were there to rescue people and provide relief. The entire coast along the Bay, from Tamil Nadu to Odisha, and even parts of West Bengal, are vulnerable to storms and cyclones every year. The super cyclone that hit Odisha in 1999 and the 1977 floods that played havoc in Tamil Nadu and Andhra Pradesh ought to have taught enough lessons to the authorities. Unfortunately, neither the Centre nor the States seem to have responded in the way they should have. Instead of spending thousands of crores every year on compensation and flood relief, the Centre and the coastal States would do well to invest in permanent solutions, which include a proper drainage system for the flood waters to empty into the sea. All natural avenues for drainage have been blocked over the decades and must be reactivated. The Monsoon Mission that the Centre cleared about six months ago must be implemented at least before the 2013 season. The blame game and haggling over compensation does not help anybody. The NDMA has already laid down the basic framework that must now be implemented.

Comments by Praful Rao
Cyclone Nilam which was being tracked by STH, made landfall at Mahabalipuram (Tamil Nadu) at around 1630h IST on 31Oct2012. Thereafter, as per the IR imagery, the storm crossed inland, curved towards the north east, reformed and gained strength over the Bay of Bengal and was very active from the the 03Nov-05Nov2012 along the coast of Andhra Pradesh.
Placed below are 3 IR images of 04Nov2012, showing intense clouding off the coast of Andhra Pradesh.
It is surprising that the Govt of AP denies knowledge of the movement of the storm, when everything was so clearly visible to anyone armed with just a laptop and internet.

Posted by SaveTheHills at 3:22 PM 2 comments:

Posted by SaveTheHills at 12:41 PM No comments:

About Superstorm Sandy : From CNN


Praful Rao
Posted by SaveTheHills at 1:23 PM No comments: