An excerpt of the email from the Flood Met Office, Jalpaiguri is placed below :-
From: Flood Meteorological office Jalpaiguri Sealpara
Date: Thu, Oct 28, 2010 at 3:46 PM
Subject: Withdrawal of South-West monsoon, 2010.

Praful Rao
Posted by SaveTheHills at 6:25 PM No comments: 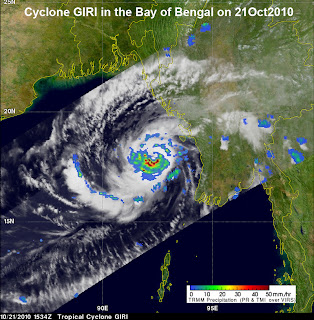 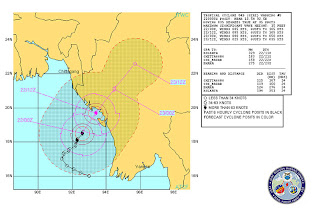 One of the objectives of STH is to monitor adverse weather phenomenon which might trigger landslides with a  view to fore warn communities. To that extent we have tracked the two cyclones (LAILA and GIRI)  and two depressions which formed in the Bay of Bengal thus far in 2010.
Placed above is an image of GIRI from the TRMM website and the projected track by JTWC (US Navy)

Thousands of people have been left homeless by a cyclone that struck western Burma on Friday.
Cyclone Giri cut many communication links to Rakhine state, and only now is the full extent of the damage emerging.
Residents say about four-thousand people have lost their homes, and that Buddhist monks and nuns have set up relief shelters.
"Damage to property is huge. Nearly all the houses made of bamboo and thatch were completely destroyed," businessman Ko Kyaw Khin said.
- excerpt from Australia News Network
Posted by SaveTheHills at 7:11 AM 1 comment: 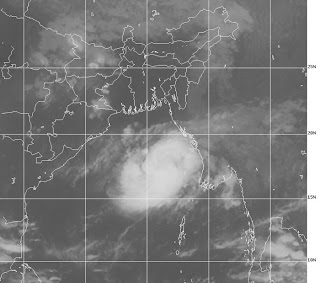 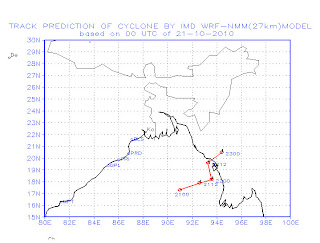 "The deep depression over eastcentral Bay of Bengal remained practically stationary, intensified into a cyclonic storm “GIRI” and lay centred at 1130 hrs IST of today, the 21st October 2010 over the same area near latitude 17.50N and 91.50E, about 350 km south-southwest of Sittwe (Myanmar), 450 km south of Cox Bazar (Bangladesh) and 650 km southeast of Digha (West Bengal, India).
The current environmental conditions and numerical weather prediction (NWP) models suggest that the system would intensify further into a severe cyclonic storm. It would move northwards initially and then north-northeastwards and cross north Myanmar and adjoining Bangladesh coasts by tomorrow, the 22nd October 2010 evening between Teknaf (Bangladesh) and Kyaukpyu (Myanmar) near Sittwe (Myanmar)."

Italics are mine
Posted by SaveTheHills at 2:43 PM No comments:

STH Stormwatch : Another depression forms in the Bay of Bengal (21Oct2010) 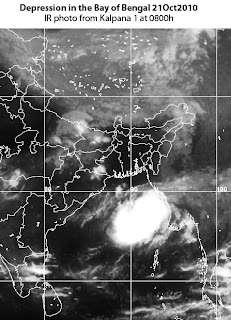 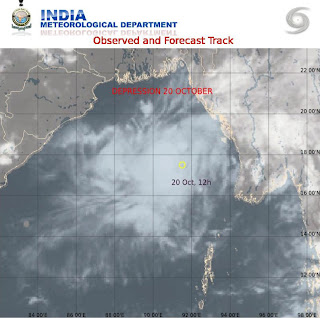 Whereas the India Meteorological Dept (IMD) in its End of Monsoon Season 2010 report states that "2010 has been the only year in the recorded history after 2002, to have no depressions during the entire season", two depressions have brewed up in quick succession in the Bay of Bengal in as many weeks in mid Oct2010.
Placed above are the IR image  and position of the depression in the bay at 0800h as on 21Oct2010.
As per the IMD,
"the current environmental conditions and numerical weather prediction (NWP) models suggest that the system would intensify further into a deep depression. It would move initially northwards and then north-northeastwards towards north Myanmar and south Bangladesh coasts during next 48 hours."
STH will post updates on the system on this blog as and when necessary.

Praful Rao
Posted by SaveTheHills at 9:16 AM No comments:

STH Stormwatch : A Depression in the Bay of Bengal (update as on 16Oct2010) 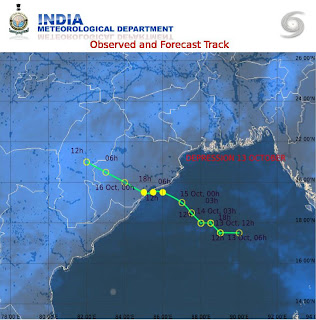 Excerpt as From All India weather report "Night" (15Oct2010)
Synoptic Features based on 1730 hrs IST
♦ The deep depression over northwest Bay of Bengal moved westwards and lay centred at 1730 hours IST of today, the 15th October 2010 over northwest Bay of Bengal, close to Orissa coast near lat. 19.5 °N and long. 85.5 °E, about 50 km south-southwest of Puri (Orissa) and 90km east-northeast of Gopalpur (Orissa). The deep depression would move west-northwestward and cross Orissa coast between Gopalpur andPuri during next six hours.
Praful Rao
Posted by SaveTheHills at 6:47 AM No comments:

Excerpt from the India Meteorological Dept  "Midday" weather report of 14Oct2010
The depression over east central and adjoining northwest and west central Bay of Bengal remained practically stationary and lay centred at 0830 hours IST of today over the same area near lat. 18.0 °N and long. 88.5 °E, about 550 km east of Visakhapatnam, 430 km southeast of Gopalpur and 400 km south-southeast of Digha. It is likely to intensify further into a deep depression and move west-northwestward and cross Orissa coast between Gopalpur and Paradip by 15th October evening.

Praful Rao
Posted by SaveTheHills at 5:30 PM No comments:

STH Stormwatch : A Depression in the Bay of Bengal 13Oct2010 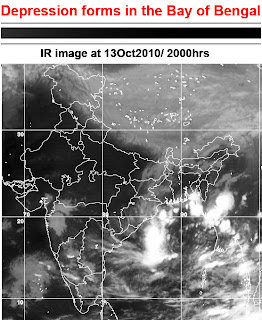 STH is monitoring the progress of this storm as a part of early warning to vulnerable communities
Praful Rao
Posted by SaveTheHills at 9:19 PM No comments: 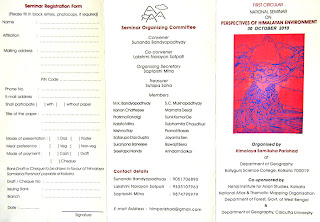 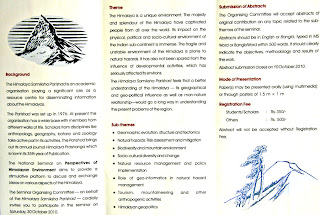 Unfortunately, STH will NOT be able to attend, we will be on our way to attend the 1st Indian Landslide Congress in Lucknow, where we have already sent our write-ups and also contributed 72 hi-resolution photos for the photo exhibition. You can read about the Congress here

Praful Rao
Posted by SaveTheHills at 2:13 PM No comments: 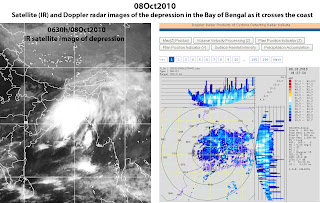 Heavy and intense rainfall is the main trigger for landslides in this area and as such one of the roles of STH is to monitor rainfall and warn communities. Placed above is an update (IR and Doppler radar image) on the depression (see last post) as it crossed the coast.
Sadly India Meteorological Department (IMetD) warns of YET ANOTHER low pressure which may form in the central Bay of Bengal in the next few days.For those interested in monitoring the movement of the storms in the Bay of Bengal on the internet, the link is herePraful Rao
Posted by SaveTheHills at 7:56 AM No comments: 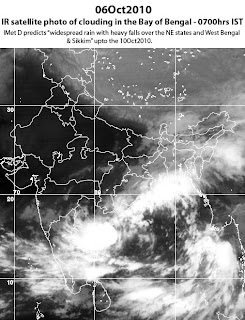 Hopefully this system is the last for 2010!


Praful Rao
Posted by SaveTheHills at 7:54 AM No comments: 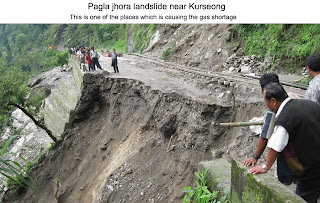 In a text book example of how  landslides indirectly impact communities, a story was published in the today's Telegraph on the severe cooking gas shortages in the three main towns of Darjeeling district (Kalimpong, Kurseong & Darjeeling).

Extracts of the report are published below:-
More trucks to end LPG shortage
OUR CORRESPONDENT
Kalimpong, Oct. 4: The Indian Oil Corporation has increased its fleet of trucks from 29 to 35 to ferry LPG cylinders to the hills, expecting to make up for the shortage of cooking gas that has been plaguing the hills for the past four months.
The shortage of supplies had been because of road breaches triggered by landslides.
“Trucks had to take a detour because of the road breaches, besides reducing the carrying capacity by more than 30 per cent (ferrying less cylinders than what they actually can),” said A.T. Roy, area manager, LPG division, IOC.
Cooking gas consumers in the hills were forced to make alternative arrangement to keep the kitchen fire burning. The LPG scarcity — primarily because of bad roads — had been lingering for about four months.
A major breach at Paglajhora on NH55 that connects Siliguri with Darjeeling is yet to be repaired, forcing the trucks carrying LPG cylinders to take a detour via Mungpoo.
With the Dasain festivities only a couple of weeks away, many people were seriously thinking of cutting down on the number of food items in order to save on gas.
“I had to dust my old kerosene stove to minimise the usage of LPG cylinders,” said Binita Singh, a resident of East Main Road here.
The situation is no better in Darjeeling and Kurseong. “Yes, we, too, are being able to get the LPG cylinders refilled once in two months. In fact, we had to get a filled cylinder from our brother in Siliguri to keep the kitchen fire burning,” said Bishal Lama, a resident of Dow Hill in Kurseong.


Praful Rao
Posted by SaveTheHills at 10:05 AM No comments:

The rainfall data of Sep2010 is placed above.
Kurseong again leads with more than normal rainfall, whereas both Kalimpong and Darjeeling have a deficiency in rainfall.
Half the month was dry in Kurseong and Darjeeling whereas in Kalimpong it only rained (equal or more than 5mm) for 9days!
Darjeeling district has remained largely unscathed by landslides this month with no death reported.
I wonder whether this is a trend we are seeing since IMetD records show that in Sep2009 (-37%) and Sep2008 (-31%) we had a deficient rainfall in Darjeeling district.
Of course,  it was a different matter in Sep2007 when we had a whopping 71% excess in rainfall with massive destruction all over Sikkim and Darjeeling and that was when STH was born. For those interested the first landslide report by STH is here


Praful Rao
Posted by SaveTheHills at 6:41 AM No comments: