Emerging issues from the workshop on "Hazards and Critical Environmental issues", 23Nov2011 at Kalimpong 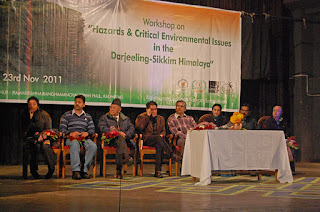 The workshop went of very well with Shri LN Sherpa (WBCS), Sub Divisional Officer (SDO), Kalimpong as the Chief Guest, Shri Shailesh Anand (IFS), Div. Forest Officer as the Special Guest and Shri PR Pradhan, distinguished educationist of this area as the Presiding Officer. Approximately 500 people attended the workshop in the Town Hall and the workshop was widely covered in several regional dailies of the region as well as by local TV channels.
The salient issues which emerged and recommendations are placed below :-

1.      Speaker : Wg Cdr Praful Rao (President , SaveTheHills)
Topic: “5 months to go for the monsoons”
Gist of talk :- Disaster Management still mired in relief-centric mode.
It was brought out by Wg Cdr Praful Rao (retd) of SaveTheHills in his presentation “5 months to go for the monsoons” that despite the Disaster Management Act 2005 and the purported  “paradigm shift” in disaster management towards prevention/preparedness and mitigation, nothing has changed at the grass roots level and that management of disasters in this part of the country was still totally relief centric .
Thus, with barely 5 months left for the next monsoons in May2012 and with many areas and structures weakened by the 6.9R earthquake of 18Sep2011, virtually nothing has been initiated towards:-
a) Identifying areas which require urgent attention.
b) Prioritizing & commencing preventive work in vulnerable areas.
c) Setting up an early warning system to alert communities in this region.
d) Building capacities of vulnerable communities.
e) Improving the drainage in landslide prone urban areas and rural hamlets such as Algarah (Kalimpong subdivision) -since all the deaths caused by landslides in Darjeeling & Sikkim in 2011 took place in built-up areas and were related to drainage problems.
As such, instead of commencing landslide preventive and disaster preparedness works on a war footing to shore up our defenses before May2012 ( ie monsoon commencement), we seem to be frozen in a stupor and it is certain that we will walk into the monsoons of 2012 having wasted valuable time and in a very vulnerable state.
Recommendation : Landslide and disaster prevention/ preparedness/ mitigation works may be initiated without further delay.


2.      Speaker : Wg Cdr Praful Rao (President , SaveTheHills)
Topic: “5 months to go for the monsoons”
Gist of talk : Sharing of data from non- IMetD instruments for monitoring meteorological  elements (rainfall, pressure, humidity, wind etc).
While responding to a question, Wg Cdr Praful Rao brought out the fact that even though the number of  automatic weather stations (AWS) and automatic rainfall gauges (ARGs) installed by the I Met D needed to be increased for better monitoring of rainfall data etc, there were already some  digital monitoring instrument s installed by the following departments in the district :-
a) Sericulture dept.
b) Agriculture dept.
c) Forest dept.
d) NHPC
Recommendation : Meteorological data/information from instruments maintained by the above departments maybe shared with IMetD in order to improve the accuracy of forecasting. This information may also be uploaded onto their  websites on a daily basis so that they maybe available organizations such as SaveTheHills , research scholars and institutions.


3.      Speaker :  Dr Malay Mukul (Dept of Earth Sciences, IIT Mumbai)
Topic : “Seismicity of the Darjeeling – Sikkim Himalaya”
Gist of talk : A Great Earthquake in the Darjeeling-Sikkim Himalaya  still possible.
Dr Malay Mukul of IIT Mumbai stated the recent 6.9R earthquake in this region should not lull people to thinking another big earthquake was not expected. He said that based on GPS readings, a great earthquake measuring 7R and above was still possible and that the 18Sep2011 earthquake was just a wake up call.
In this regard, Dr Mukul cautioned people to pay due regard to building codes and standards so that it would make living safer in the mountains.
Answering a question, Dr Mukul said that urban settlements in the foothills eg Siliguri would be equally if not more susceptible to damage in the event of a great earthquake in this region due to liquefaction of the alluvial soil in the area.
Recommendation : An intense and sustained awareness campaign must be undertaken to enlighten the public regarding Dr Mukul’s observation and building codes.
Mock drills/ landslide studies maybe introduced in educational institutions.
Also, since this area is prone to earthquakes, the density of GPS stations in this area maybe increased to understand the movements of the earth and faults lines more accurately.


5.      Speaker :  Ms Priya Shreshta (WWF, Gangtok)
Topic : “Drying springs in the Darjeeling-Sikkim Himalaya and ways to recharge them
Gist of talk : Need for water conservation and Dhara Vikas Project of Sikkim
Ms Priya Shrestha of WWF, Gangtok spoke of drying natural springs (dharas) all along the Himalayas  which would result in severe water crisis in the Himalayas even as demand was skyrocketing due to burgeoning population and tourism. She said this was caused by increased runoff of rainwater due to increased urbanization and deforestation.
She described in detail the Dhara Vikas Program in Sikkim which had shown promising results in recharging underground aquifers and had increased the water outputs from springs which were drying up.
Recommendation: Natural springs are the lifeline of mountain communities and even though ambitious water supply projects (such as pumping water from Balasun river to Darjeeling and from Teesta river to Kalimpong) may solve water problems of towns, springs will continue to be the main source of water supply to the rural areas and farming communities. As such a detailed mapping of these are required with a view to determine
a) Those springs which are perennial.
b) Those which are seasonal (ie rain-fed) and dry up during the non-monsoon season.
c) Springs which have dried up due to landslides, deforestation and other human activities.
d)  Studies need to be undertaken to find long term solutions to drying springs and their impact on agriculture as well as a source of potable water especially in rural areas.


6.      Speaker : Mr Roshan Rai,( DLR Prerna, Darjeeling)
Topic : “Solid waste management in the Darjeeling- Sikkim Himalaya”
Gist of talk : Community awareness and responsibility as regards solid waste disposal in the hills.
Mr Roshan Rai (of DLR Prerna) urged mountain communities to be more aware about the fragile mountain environment and shoulder their share of responsibility as regards solid waste disposal. Mountain communities must learn to segregate and compost their biodegradable solid waste so as to reduce waste generated, he also said that simply throwing garbage into the nearest jhora or stream was not a solution to waste disposal. He suggested numerous ways in which people could produce less waste by making small adjustments in their life style and also urged govt authorities to provide waste treatment plants in the vicinity of large urban settlements and also linkages for recycling of solid waste products (eg there is no way in which people from Kalimpong can send used PET bottles for recycling).
Recommendation : Organizations such as DLR Prerna should be funded and tasked to carry out an intense and sustained awareness program. Solid waste treatment plants should be built in the vicinity of large mountain urban settlements.


7.      Speaker : Mr GN Raha (IMetD, Gangtok)
Topic: : Trends in weather patterns in the Darjeeling-Sikkim Himalayas”
Gist of talk: Unpredictable weather patterns in the mountains would lead to more frequent disasters.
Unsettled and often unpredictable weather trends in the mountains may lead to intense bursts of rainfall which could trigger of landslides as was seen in the recent past. Mr GN Raha of IMetD , Gangtok speaking during the workshop said that there was a need to have a higher density of weather monitoring systems to improve forecasting and to provide early warning to mountain communities so that lives maybe saved.
Recommendation : An SMS based early warning system about onset of adverse weather/heavyrain, such as that which has been established by SaveTheHills in conjunction with I MetD (Gangtok) must be made available to the lay person with the text messages being sent in the local dialect.
Praful Rao
Posted by SaveTheHills at 6:42 PM No comments: 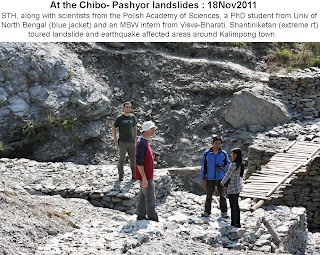 STH has in the past (see 1 and 2) has had the unique privilege of hosting two seminars where Prof Leszek Starkel of Polish Academy of Sciences, Kracow, Poland and a legendary figure amongst geomorphologists, was our main speaker.

Continuing this liaison, we had two young scientists ie Dr Łukasz Wiejaczka (red jacket), hydrologist and geomorphologist and Dominik Płoskonka (extreme left) soil scientist from the same institute with us the whole day on 18Nov2011.


Praful Rao
Posted by SaveTheHills at 2:25 PM No comments:

Seminar on Disasters and Environmental issues in Kalimpong : 23Nov2011 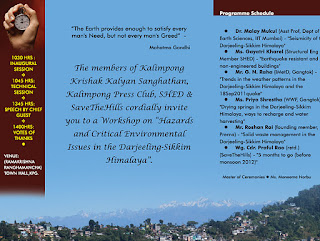 Praful Rao
Posted by SaveTheHills at 2:53 PM No comments: 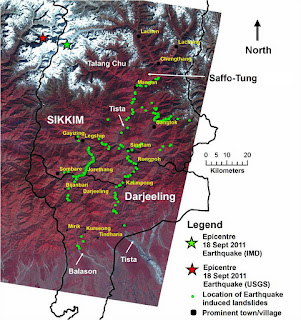 You can read the complete report here

Praful Rao
Posted by SaveTheHills at 7:09 AM No comments: 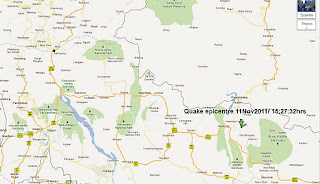 Praful Rao
Posted by SaveTheHills at 8:11 AM No comments: 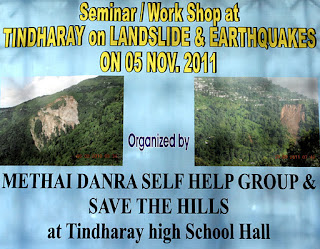 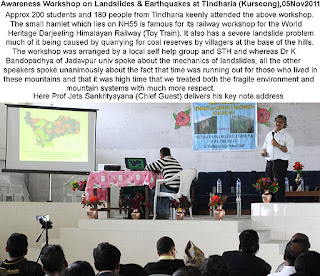 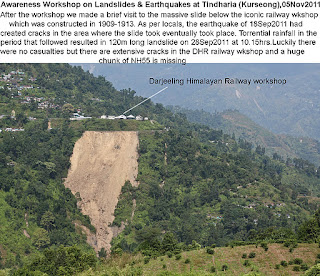 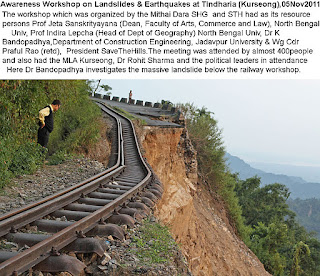 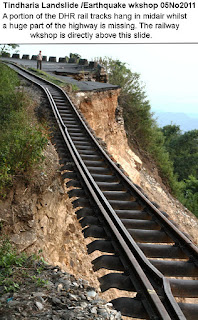 STH would like to thank Prof Jeta Santkrityayana, (Dean, Faculty of Arts , Commerce & Law), University of North Bengal, Prof Indira Lepcha (Head of Dept of Geography) University of North Bengal, Dr Kaushik Bandopadhyay, Associate Prof Dept of Construction Engineering, Jadavpur University, for their concern, time and effort - we would also like to thank Methai Dara SHG and particularly Mr Suren Chhetri for all the effort in making the seminar a success.

Posted by SaveTheHills at 1:58 PM No comments: