Killer landslides of the future : Darjeeling (30May2013)

"I fear that we will see a legacy of landslides in the urban areas of Asia over the next decade as a result of the incredible rate of urbanization in Asia." -  Professor Dave Petley, BSc (Hons) AKC PhD FRGS FGS ILTM CGeo, Univ of Durham (UK) 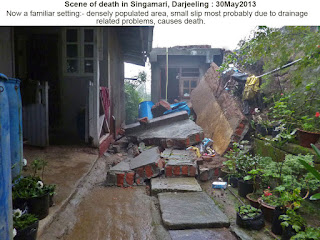 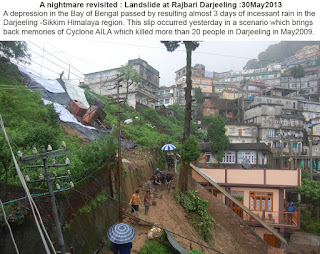 
Subhawana Chhetri, 21, was killed when a wall collapsed during heavy rainfall at Himali Goan in Singamari near here around 2pm today. “She was trying to fill up a drum with rain water when a retention wall collapsed and she came under it,” said a relative.

Comment by Praful Rao, Kalimpong
The fatal landslides shown above are now a familiar sight ( see 1 and 2) :-
Their characteristics are :-
a) They are relatively small landslides or slips.
b) The human footprint is writ large in the cause of the slides - most often they are caused by faulty drainage or lack of any drainage.
c) They take place in an urban setting like the one seen above.
d) They kill people.
e) We can do a lot to mitigate or prevent  these killer  landslides but tragically no one is really bothered.
f) What is scary is that the monsoons have not even reached us (officially they should be over us on 05Jun2013) and we have at least 4 months of rain ahead of us!

Posted by SaveTheHills at 9:24 AM No comments:

Posted by SaveTheHills at 6:24 AM No comments: 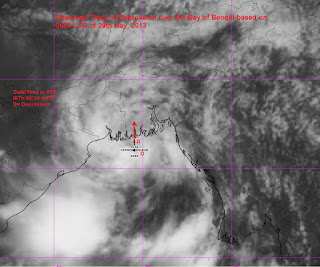 Posted by SaveTheHills at 4:16 PM No comments: 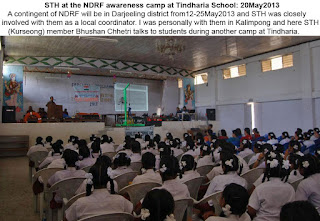 Posted by SaveTheHills at 6:19 AM No comments:

Excerpt from Indian Express : UNESCO may give 'endangered' tag to Darjeeling heritage line


The 132-year-old Darjeeling Himalayan Railway (DHR), the country's only railway line which is a World Heritage Site, may be labelled as an "endangered site" by the Unesco, if nothing is done by India soon.


Recently, the Unesco office in New Delhi had suggested to the Railways to send a senior official to its World Heritage Centre in Paris, France, to apprise its team that is concerned about the progress in restoration work. To be on the World Heritage List implies that the site needs to fulfil a certain criteria as mentioned in the Unesco World Heritage Convention.


Popularly known as the Toy Train, the DHR is a 78-km-long narrow guage line that connects New Jalpaiguri and Darjeeling in West Bengal. Built between 1879 and 1881, the line touches the maximum elevation of 2,200 metres, including Ghum, the highest railway station in India. The DHR received the World Heritage Site in 1999.


However, since 2010, the line has been facing disruptions. It was severely hit by the 2011 earthquake in Sikkim. Several assessments say the restoration work has been slow due to the apathy from both the Centre and the state.


In a letter to Minister of State for Railways, A R Chowdhury, Director and Unesco representative to India, Bhutan, Maldives and Sri Lanka, Shigeru Aoyagi, has said that the state of DHR is serious. "If no action is taken by the government of India to restore it urgently, there may be a chance that the Intergovernmental Committee of World Heritage Convention [may] advise to place the DHR in the list of endangered sites to provide focused attention for conservation," the letter stated.


Chowdury has been assigned to follow-up on this issue since the DHR is in his home state.


The Unesco has also started talks with the Heritage directorate of the Railway Ministry for a technical cooperation to develop a Comprehensive Conservation Management Plan. If everything goes well, the plan may be ready by August. 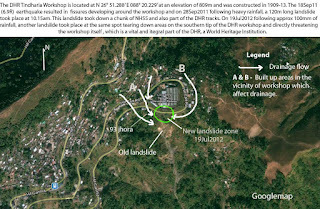 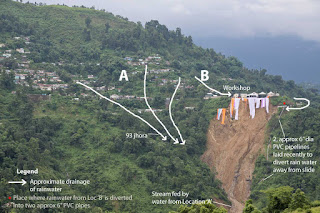 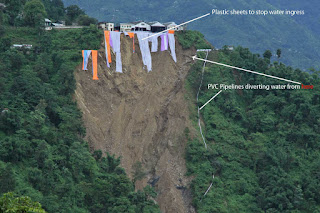 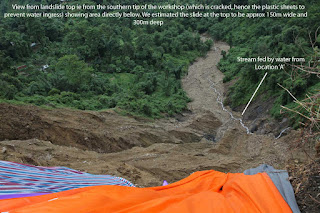 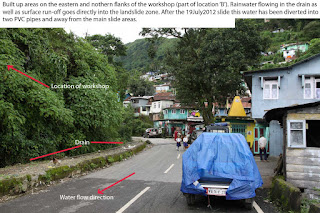 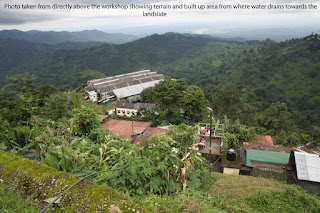 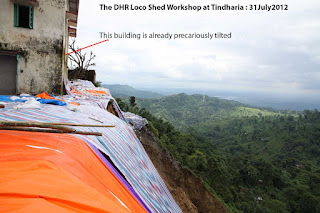 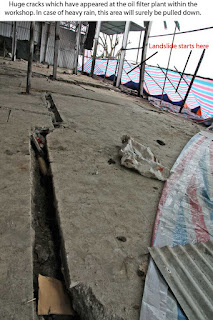 Comment by Praful Rao
On 31Jul2012, I spent an entire day at the Tindharia workshop area, checking the drainage flow in the vicinity of the Tindharia DHR workshop and interacting with locals and DHR authorities. The captioned photographs above are from that visit.
My personal (gloomy) assessment based on the lack of progress of any landslide prevention measures there till date is that if we have prolonged and heavy rainfall in the area during the ensuing monsoons, parts of the heritage workshop will certainly crumble into the massive landslide which has already damaged the structure.
Sadly, the truth is that having wasted the valuable dry season (0ct2012-Apr2013) when major slope stabilization works should have been undertaken, we have the south westerly monsoons knocking at our doorstep once again (June first week).
And it is common knowledge here that except for fire-fighting measures no serious river training, drainage correction or slope stabilization work can be undertaken in the next 4-5 months of rains as such we will have to wait until after the monsoons (ie till Oct2013) for any major stabilization work to be initiated.
And that, may just be a little too late.
Praful Rao,
Kalimpong

Posted by SaveTheHills at 4:09 PM No comments: 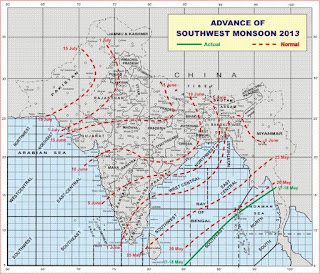 The northern limit of southwest monsoon continues to pass through 5.0°N/85.0°E,10.0°N/90.0°E, Long Islands and 16.0°N/98.0°E.
Conditions are favourable for further advance of Southwest monsoon over some more parts of south Bay of Bengal, remaining parts of Andaman Sea and some parts of east central Bay of Bengal during the next 2-3 days.


Praful Rao,
Kalimpong
Posted by SaveTheHills at 7:05 PM No comments: 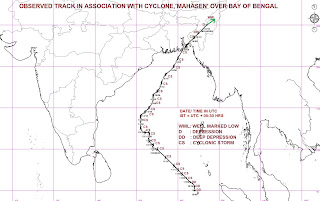 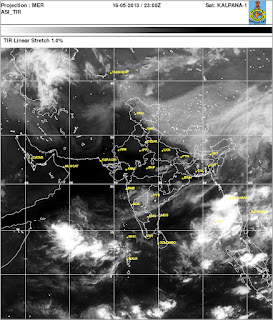 Infra Red (IR) image of 17May2013 (4.30AM IST), above shows Cyclone MAHASEN has almost dissipated and though 45 died in Bangladesh, it spared Myanmar and the displaced Rohingya Muslims there, almost entirely.

Lessons learnt
1. Adequate advance warning.
Thanks to frequent updates of satellite images and information from a number of excellent websites, STH monitored the progress of the storm from 10May (when it started as a depression, south of the Andaman islands) upto 16May2013 (when it made landfall in Bangladesh).
This is reassuring.
With this lead time available, large scale evacuation of population was possible from low lying areas in Bangladesh and Myanmar and the death toll in this storm was almost negligible compared to Cyclone Sidr which killed 4000 in Bangladesh and Cyclone Nargis which wiped out over 100,000 in Myanmar.
2. Accuracy of predicted movement of the Cyclone.
The movement of the storm was predicted accurately and there was almost no deviation from predicted track except that it strayed 100km northward in the fag end, hence avoiding Myanmar.
This again is reassuring because it is now possible for the average citizen, armed with just a broadband connection and laptop, to empower him/herself about the accurate position/track and movement of major adverse weather systems which might affect their communities.
3. Almost no media attention in India about Cyclone MAHASEN.
Perhaps because Cyclone MAHASEN did not threaten the Indian landmass, all major print and electronic media were largely silent about a huge tropical cyclone shimmying up the eastern coastline.
This was a pity because I found a large number of intelligentsia (let alone the common man on the street) in Kolkata were totally unaware of a storm breathing fire in its close proximity (on 15May2013). 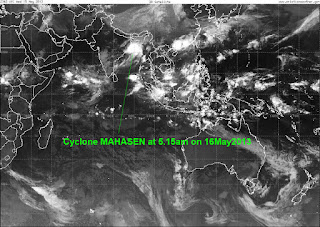 
Praful Rao,
Kalimpong
Posted by SaveTheHills at 5:57 AM 1 comment: 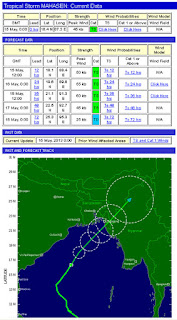 
Praful Rao,
Kalimpong
Posted by SaveTheHills at 9:35 AM No comments: 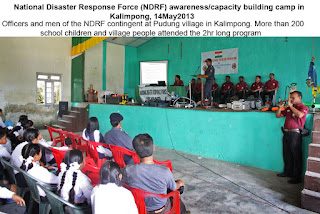 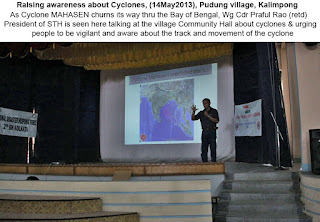 A contingent of the National Disaster Response Force (NDRF) is in Kalimpong for the entire week (13May-17May2013) carrying out their "peacetime" role of training, capacity building and raising awareness about disasters.
STH was extremely glad to work alongside them as a local coordinator and took advantage of the NDRF visit to talk about cyclones and Cyclone MAHASEN in particular as it roars through the Bay of Bengal.
Several thousand school children and citizens of Kalimpong would be more aware about disasters, cyclones and the NDRF by the end of the week.

Posted by SaveTheHills at 6:46 AM No comments: 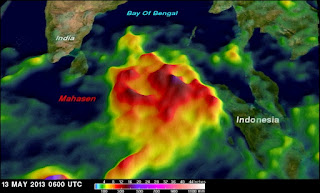 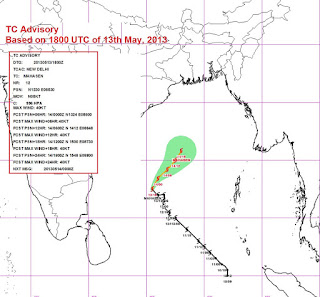 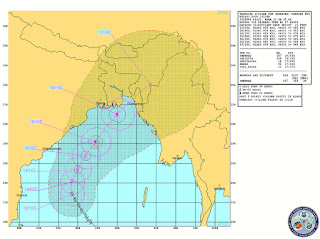 1. Placed from top to bottom are graphic updates from
a) NASA's TRMM
b) IMetD
c) US Navy's JTWC
2. Further an excerpt from TRMM  is placed below :-

"Monday May 13, 2013
Tropical Cyclone Mahasen Rain Moving Into Bay Of Bengal
Tropical cyclone Mahasen is moving through the Bay of Bengal and is predicted by the Joint Typhoon Warning Center to impact southeastern Bangladesh and northwestern Myanmar (Burma) in about 4 days."

Praful Rao,
Kalimpong
Posted by SaveTheHills at 6:03 AM No comments:

Update on Cyclone Mahasen from Google Earth and JTWC (US Navy) 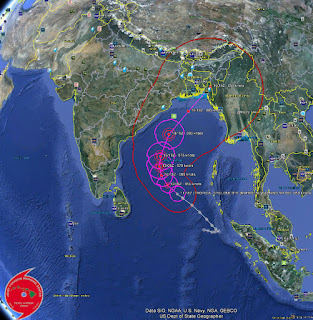 Praful Rao,
Kalimpong
Posted by SaveTheHills at 6:20 AM No comments: 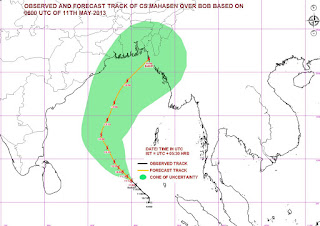 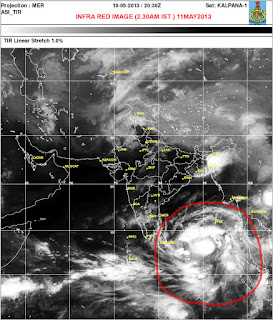 Deep Depression over southeast Bay of Bengal
The deep depression over southeast Bay of Bengal remained practically stationary and lay centred at 2330 hrs IST of 10th May 2013 near latitude 05.50 N and longitude 92.00E, about 400 km south-southwest of Car Nicobar, 1200 km east-southeast of Trincomalee, 1550km southeast of Chennai and 1850 km south of Chittagong.
The system would intensify into a cyclonic storm during next 12 hours. It would move initially northwestwards during next 48hours and recurve thereafter northeastwards towards Bangladesh-Myanmar coast.

Praful Rao,
Kalimpong
Posted by SaveTheHills at 5:47 AM No comments: 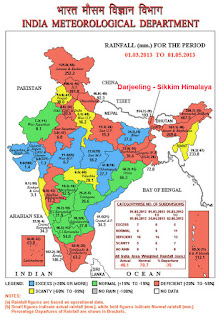 The pre-monsoon season in India lasts from Mar- May and as per the above map from IMetD we are running deficient in rainfall.
STH has installed a new ARG in Mangan (N Sikkim) but regretfully the ARG at Jaldhaka in the foothills of the Dooars has become unserviceable.

Posted by SaveTheHills at 2:26 PM No comments: