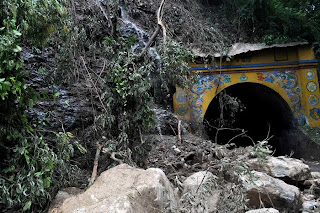 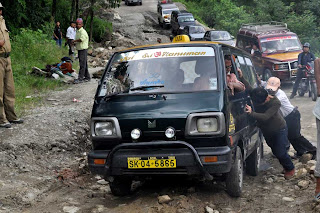 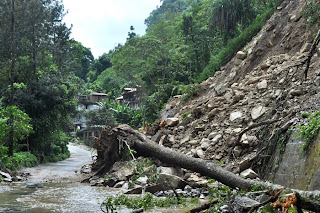 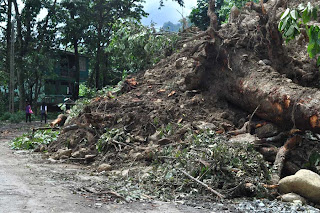 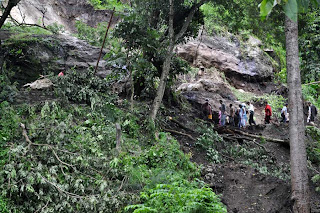 
GANGTOK, August 28:
1. The unrelenting slides induced by incessant rainfall have further displaced more households in with 35 families shifted to safer places by the District administration today while Gangtok was cut-off from rest of the country for the second straight day due to two stubborn slides along the 31A near Government Fruit Preservation near Singtam.
2. The Project Swastik of Border Roads Organization (BRO), which looks after the national highways in and parts of , has managed to clear all the slides which occurred between 32nd Mile and Singtam on Thursday night.
3. The highway does have a smooth traffic but for the slides near the Government Fruit Preservation Factory forcing the commuters to walk some 200 m over the slides and take transshipment on either side.
4. The BRO Project Swastik executive engineer, AK Singh said that slides near Government Fruit Preservation Factory could not be cleared also even though three machines and sufficient manpower were deployed since first light today.
5. “We are trying our best to clear the slides by tomorrow noon. However if it rains tonight, we cannot help it”, said Singh. He pointed out that restoration works have been hampered by constant slush coming from the hill side.
6. “During our survey in the area, a considerably large artificial pond had been spotted on top the hill,” said the BRO official. The pond could have been created due to collection of underground water or supply from small streams located further uphill.
7. The seepage of water from the pond has led to sliding of more slush down the road whenever the existing muck is swept away by the machines and labourers. Whenever the muck from the road is cleared another batch of muck comes down from the hillside, the BRO official said.
8. Meanwhile, the continuous flow of slush has gathered threateningly in the staff quarters of the factory prompting the East District administration to evacuate 18 families from the quarters to safer locations.
9. SDM (East) AB Karki said that the quarters have been damaged by the slush and slides. “We shifted 18 families from the quarters and provided them relief materials,” he said.
10. The SDM also informed that two houses were damaged by slides at Sirwani near Dikchu. The families have also been shifted, he said.
11. Around 15 houses were also damaged in various degrees at Chisopani and Dochun near Singtam and the families have been shifted, said Karki. There are also reports of livestock being killed by slides, he said.
Photo credit and report from Sikkim Express - many thanks to them and for those interested the full text of Dr Petley's article is here

Landslides in and news from Sikkim 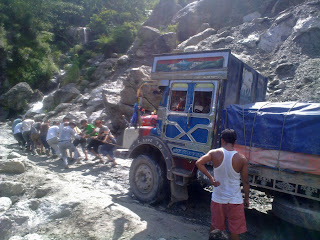 Seven landslides cut off link Woman disappears in swirling flash flood (Telegraph, India)
OUR CORRESPONDENT
Gangtok, Aug. 27: Seven landslides struck a 15km stretch of NH31A and crippled traffic on ’s only road link with the rest of the country after heavy rain lashed the Himalayan state last night. A 31-year-old woman was washed away in one of the flash floods that followed.
The landslides, four of them major ones, occurred between 32 Mile and Singtam on NH31A, the stretch littered with slush and debris that came tumbling down from the hillside late last night and early this morning.
The landslides left at least 100 vehicles coming from Siliguri stranded on the Bengal-Sikkim border at Rangpo for sometime. While some passengers tried to walk and cross the slides, others returned to Siliguri. “The vehicles — there were lots of them — were told to stay put at Singtam for the night,” said A.K. Singh, the executive engineer of Project Swastik of the Border Roads Organisation that is in charge of the highway.
The first major landslide nearest to Gangtok was at the mouth of Topakhani, a 12-metre tunnel, 23km from here.
_______________________________


From the Sikkim Express
State Disaster Management Authority to oversee natural calamities prevention, mitigation operations
SE Report
GANGTOK, August 25: The State government has established a ten-member State Disaster Management Authority (SDMA) headed by Chief Minister as ex-officio chairman for emergency and mobilization of resources including manpower for disaster management whenever natural calamities strike .
The ministers for urban development, irrigation, health services, rural development, public health engineering, roads & bridges and buildings & housing departments are also members in the SDMA.
State chief secretary TT Dorji is also a member of this authority with disaster management department secretary as the member secretary.
It is informed that the SDMA shall be an authority for declaration of disaster situation and disaster areas with boundaries and declaration of emergency and mobilization of resources including manpower for relief work, rehabilitation, reconstruction, search and rescue for disaster management when disaster occurs. 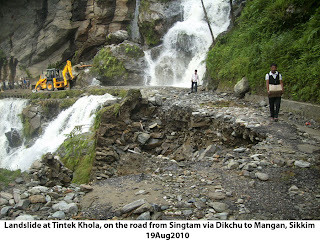 SaveTheHills is a Kalimpong - based organization & as such our work has, for the most part been Kalimpong-centric- I am sure that this leads many to think that Kalimpong is the most landslide prone area in this region and the other major urban centres and areas in the district and in Sikkim are totally devoid of this scourge.
This perception could not be more inaccurate - I am very sure that other areas are as badly if not worse affected - it is only that the effects of this disaster form are so localized that no one except those directly affected would know or speak about landslides. Alas, this is a disaster form which nibbles away insidiously without many noticing the malaise until it is too late.
In this regard, I know that the state of Sikkim has had many more landslides this year than Darjeeling district, yet it this fact has hardly been noticed or acknowledged. 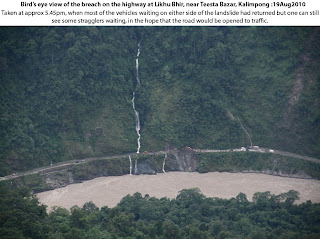 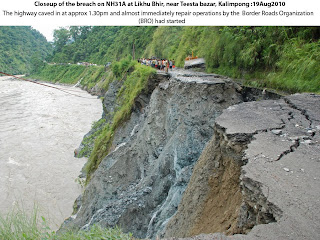 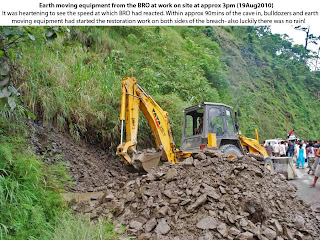 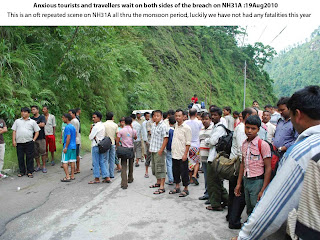 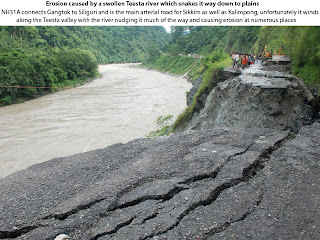 The above breach occurred at approx 1.30pm and I am glad to say that by the time I reached the spot at around 3.30pm the BRO had already swung into action with expectations that the highway would be open to traffic by the next day.
Even though Kalimpong had moderate rainfall in the last few days, heavy rain was reported in Sikkim due which the Teesta river was swollen and swift.
What amazes me is that maintaining NH31A during the monsoons is a huge problem with sinking areas and landslides at numerous places yet there are plans to construct a broad gauge railway line all the way from Siliguri to Rangpo along this same route (see here)!
Perhaps we have forgotten that we did have the Kalimpong element of the the Darjeeling Himalayan Railway (DHR) functioning from Siliguri to Geille Khola (short of Kalimpong) along this route upto 1950. It was closed as being to dangerous to operate after the devastating landslides of that year.

A man-made natural disaster in the making - Dalapchand Aug2010 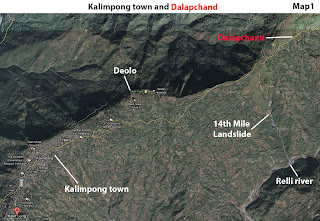 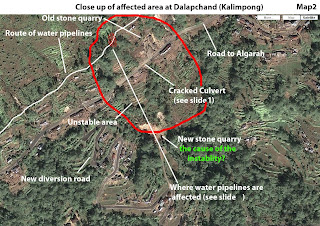 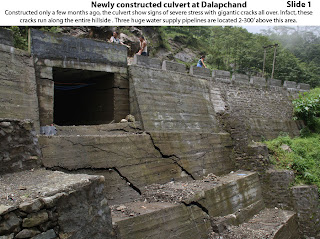 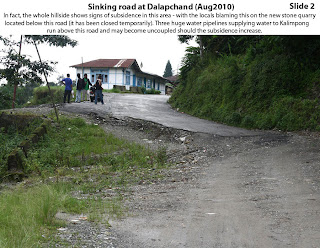 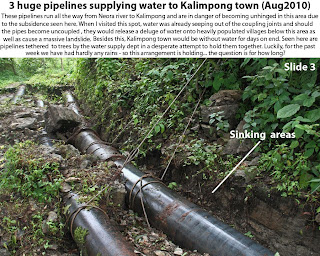 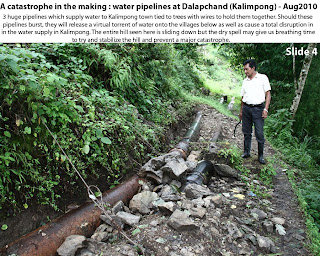 The Kalimpong town water supply is piped in through three huge 12'' pipelines running along the ridgeline from Neora river which lies to the north-east.
At Dalapchand, the opening of a new stone quarry below the road (Map2) has destabilized an entire hill (as per the local people) as such a newly constructed culvert across the road is cracked (slide1 )and severely damaged, portions of the road itself have sunk (slide2) and also the area surrounding the pipelines also have subsided leading to a situation where water has started seeping out of the couplings of the pipes. Should the subsidence result in the pipelines getting unhinged, there will be a veritable river of water gushing down heavily populated villages lying below - this will also surely cause a massive landslide in the already unstable area. Also it will disrupt water supply for days on end to Kalimpong town.

Luckily, mother nature is being kind - we have had a mild monsoon thus far and the past few days have been virtually dry...but just how will this good fortune last? 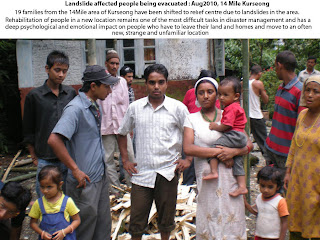 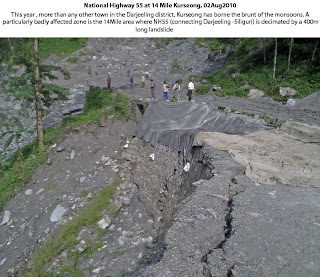 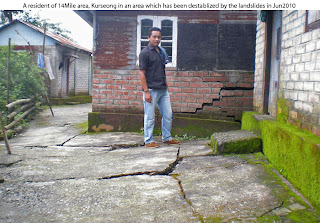 Excerpt from The Telegraph of 03Aug2010


A meeting convened by the district magistrate today resolved to intensify efforts to restore NH55 that was damaged by a landslide on a stretch of 500 metres on June 16.
Around 500 metres of the highway had caved in after a landslide at 14th Mile near Paglajhora, 35km from here, on June 16.
“We have discussed the matter with the departments which were affected by the damage of the highway. Their suggestions will be sent to the appropriate authorities for necessary steps,” Surendra Gupta, the district magistrate of , said after the meeting at Siliguri circuit house this morning.
However, PWD officials said after the meeting that possibilities of immediate restoration of the road link between Siliguri and through NH55 were bleak because of the vulnerability of the damaged stretch.
“The impact of the landslide on the highway was massive as about 500 metres of the road were completely washed away. We had tried to start the repair at the spot soon. But continuous slides caused by the rains disrupted the work,” said Nirmal Mondal, the executive engineer of the NH division of the PWD.
“As the monsoon will stay in the region till September 15, we have decided to wait till then to start the work again,” he added.
Photos and captions by Bhushan Chettri, Member STH of Kurseong
Praful Rao
Posted by SaveTheHills at 8:18 AM No comments: Projects on hand with SaveTheHills (STH) :-

1. 07Aug2010 (PR Pradhan Merit Awards in Kalimpong Town Hall).
The P.R Pradhan Merit Award is a huge, day long annual event in Kalimpong in  which approx 500 students from all the schools of Kalimpong and many eminent persons of the town attend. It is organized Scottish Universities Mission Institution (S.U.M.I) school Alumni Association to felicitate deserving students.
This year the event has chosen "ENVIRONMENT" as its theme and STH will be giving an insight into the landslide situation around Kalimpong during the ceremonies.

2. Documentary film on "Landslide Hazards" with DECU, ISRO, Ahmedabad and NDMA.
DECU, has been asked by NDMA (National Disaster Management Authority) to produce a documentary film on landslide hazards targeting students between the age group of 12-16yrs.
STH is proud to be associated with this venture and we are working closely with DECU towards this end. The film should be ready by Dec2010.

4. 01- 02Nov2010 (First Indian Landslide Congress, Lucknow).
I am glad to state that 77 hi-resolution photographs of landslides in the Darjeeling-Sikkim Himalayas have already been dispatched by us (and received) to the organizers of the event for a photo-exhibition. Further details are here

5. Article in Book on "Darjeeling Himalaya - people and environment".
Prof Mamata Desai, is an eminent scientist who is head of Dept of Ecology, Physical and Human Resources, Netaji Institute of Asian Studies in Kolkata.
She is editing a book tentatively titled "Darjeeling Himalaya - people and environment". STH will be contributing an article on the landslide scenario in Darjeeling. 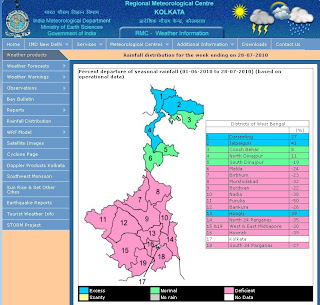 After 2 months (May/Jun2010) of deficient rainfall, we have made up in July2010.
Kurseong again leads with excessive rainfall, Darjeeling also has clocked approx 190mm above the normal rainfall, Kalimpong on the other hand has received more or less the normal rainfall.
The number of rainy days increased in all three towns and as such rainfall was evenly distributed throughout the month.
We have received a report of only one major landslide in Kurseong subdivision (even though we are aware that there are many places which are extremely dangerous and vulnerable with people even being evacuated).
I am glad to state that there has been no reported deaths caused by landslides in July2010.
SO FAR, SO GOOD  but we still have 2 months of rains ahead...

Praful Rao
Posted by SaveTheHills at 5:57 PM No comments: