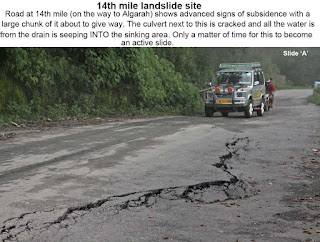 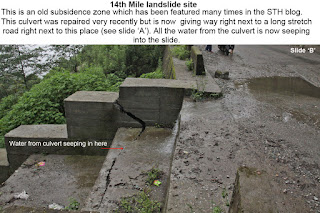 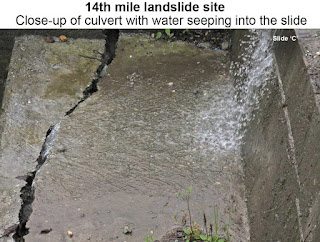 The 14th mile 'sinking zone' lying on the eastern face of the Kalimpong ridgeline is one of the old landslide areas of this town. It is repaired on annual basis and is rumored to be a "blessing" to many a contractor - except that now with population growing and even a posh hotel coming up directly above this site, it will also be a curse to quite a few.
When I visited the site on 14Jul2016, I found that a portion of the road to Algarah had sunk considerably (slide 'A') and worse still the culvert next to it had also sunk (slide 'B') - and ALL the water from the culvert was percolating into the crack (slide 'C') acting as a lubricant to an unstable hillside ready to slide down.
Coordinates :
27°05´27.6” N

088°31´57.0”E
Elevation : 1372m
Landslide blocking Kalimpong - Lava Road
With our main road to the external world, NH10 always in a precarious state during the monsoons, we rely on the Kalimpong- Lava- Gorubathan road as our an alternate route to the plains. Unfortunately, this road also has quite a few 'hotspots' which keep the BRO busy during the monsoons.
On Sunday, 10July2016 at around 1600h, following the 125mm rainfall of Saturday, a portion of this road near Rickisum gave way. It remained blocked for 4 days and effectively cut off Lava and much of the eastern parts of sub-division from Kalimpong town. 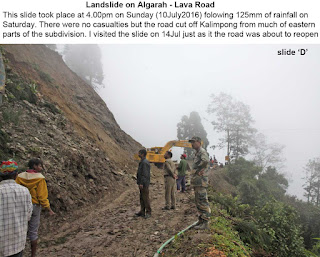 Posted by SaveTheHills at 4:06 PM No comments:

STH activities : At the Kohima Workshop on DRR and Climate Change : 07/08July2016 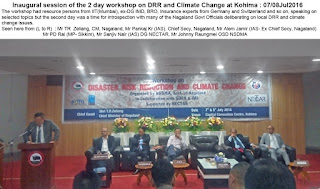 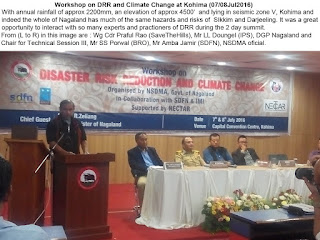 The workshop was organized by NSDMA, SDFN, IMI and supported by NECTAR
It was indeed heartening to see so many state government officials and line departments attending and actively participating in both the days of the seminar.
Praful Rao,
Kalimpong,
Dist Darjeeling
Posted by SaveTheHills at 11:51 AM No comments: 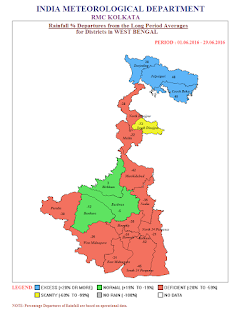 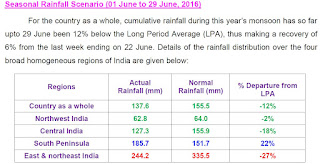 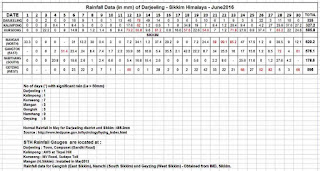 The monsoons arrived over the Darjeeling-Sikkim Himalaya almost 10 days late (14Jun instead of 05Jun2016), yet the first burst of rains after a drought-like situation brought in floods in many areas of Dooars and Alipur Duar.
Many parts of Sikkim received heavy rains leading to the dams releasing excess water on the Teesta and Rangit rivers - this would have contributed to the flooding in Jalpaiguri.
There were no major landslides in this region.

Posted by SaveTheHills at 11:34 AM No comments: 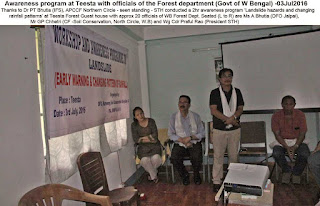 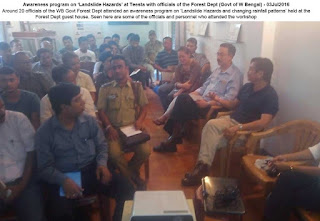 My grateful thanks to Dr PT Bhutia (IFS) - Spl APCCF and Chief Conservator of Forests, Northern Circle for making the awareness workshop possible.

Posted by SaveTheHills at 8:00 AM No comments: 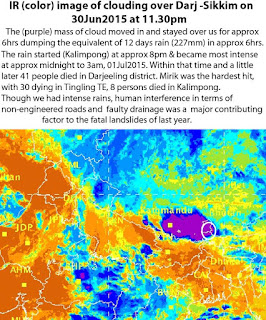 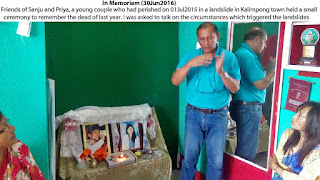 STH has covered the events in separate blogs (see 1,2,3)

Posted by SaveTheHills at 4:19 AM No comments: