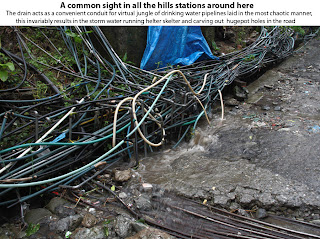 Clean-up before rains
- SOS to beat landslides
Gangtok, May 26: The East district collectorate today asked all agencies concerned to clean up roadside drains and jhoras and remove trees, which are likely to fall, before the monsoons to reduce chances of landslides and road blocks.
“If we manage to clean all the roadside drains and jhoras before the monsoons there is 50 per cent less chance of natural calamities (striking the areas). Most of the slides in East Sikkim had taken place when garbage blocked the drains and jhoras,” said East district collector D. Anandan during a pre-monsoon meeting here today.
Representatives of various departments including fire, civil defence, urban development, forest, power, PHE, police and the Border Roads Organisation attended the meeting. Monsoon in Sikkim usually begins in the second week of June and lasts till late September.
The district collector said water overflowing from the drains during the monsoon often gets blocked by garbage creating slush and triggering landslides. If the garbage is cleaned then the water can flow freely reducing chances of a mudslide.
Anandan is also the chairman of the district level relief committee that hands out compensation and sanctions for temporary restoration under the natural calamity funds. Last year the committee had sanctioned 163 projects for the restoration of damaged roads, telephone and power poles in the landslide affected areas of East Sikkim. Each project was of around Rs 50,000.
Multiple mudslides along NH31A between Gangtok and Rangpo in July last year had damaged the road for almost two weeks.
“Since maintenance of roads in urban areas is the responsibility of the urban development department, the department should clean up road side drains under its jurisdiction. Similarly, those jhoras in the urban areas which have not been cleaned by the civic body shall be cleaned for free flow of storm water,” said Anandan. He has also directed the BRO to clear drains along the area under its jurisdiction. Project Swastik of the BRO is responsible for the maintenance of NH31A, the North Sikkim highway, and the Jawaharlal Nehru Marg that connects Gangtok to Nathu-la. The district collector added that the BRO has been directed to build proper drains and take precautionary measures to limit chances of slides during road widening work.
“We have already told the government that the major hurdle for clearing drains is the cluster of water supply pipes which are running along side the drains,” he said.
The PHE department has been instructed to regulate the pipelines being laid down along the drains. The forest department has been asked to conduct a survey to identify trees, especially along NH31A, that are likely to fall during the monsoon.
“These trees should be removed at the earliest and resistance to remove such trees from private holdings shall be dealt (with) legally,” said Anandan.
The superintendent of police (East district) Mandeep Singh Tuli said a road block on the highway causes congestion in the town. “If there is a block for even 30 minutes on the highway, the traffic jam in Gangtok extends for almost 12km up to Ranipool,” he said.
The district collector said the administration will write to the BSNL authorities. “We will be writing to the BSNL authorities for ensuring good communication network which is very essential for timely rescue and relief measures. The BSNL should ensure that communications are always intact. They should also immediately restore telephone services disrupted because of natural calamities.”
All agencies have been directed to prepare their own line of action for responding to disasters. “In case of a distress call, the departments should be ready with their set of measures to be undertaken instead of coming up with impromptu arrangements,” said Anandan.
Comment by Praful Rao
Photo is from Kalimpong
Posted by SaveTheHills at 2:01 PM No comments: 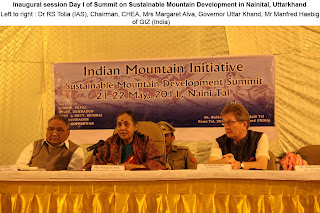 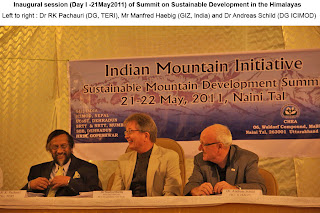 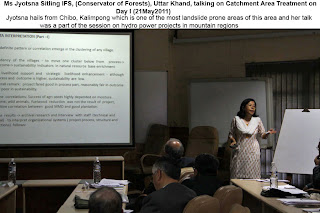 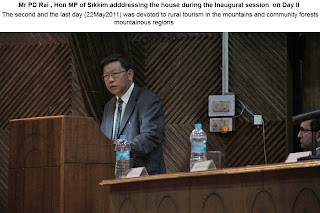 It was my privilege to attend the 2 day Summit on Sustainable Mountain Development held on 21/22May2011 at Naini Tal, Uttarkhand. The summit was the brainchild of Dr RS Tolia (IAS) former Chief Secretary Uttar Khand and currently Chairman, CHEA.
Besides being an immense learning experience, it gave us a tremendous opportunity to interact with the huge  pool of resource people and delegates who attended the seminar.

I would like to thank Mr PD Rai, MP of Sikkim for making this possible and Mr RP Gurung of ECOSS for all his help.

Of rainfall and rainfall gauges 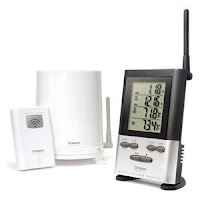 Since most of the landslides in the Darjeeling-Sikkim Himalaya are rain induced, we have made it our business to monitor rainfall in the district's 3 main towns (Darjeeling,Kurseong & Kalimpong) using wireless Automatic Rainfall Gauges (ARGs) shown above. The device records rainfall data automatically for 9 days, displays outside and inside temperatures, is affordable (approx Rs4,700 in India) and is virtually maintenance free;  it can also be bought online in India. I do believe many schools are interested in acquiring these devices as a part of their geography laboratory equipment.
In addition, I have learnt that India Meteorological Department will be installing Automatic Weather Stations in several towns in the district which includes Kalimpong and Pedong (Darjeeling already has an AWS  for some time now) - these devices are, of course, a lot more expensive and record a whole lot of other parameters which can be read here
We have started recording the rainfall data since last month and rainfall for the month of APRIL 2011 is as follows :-

We will upload monthly rainfall day wise from JUNE 2011 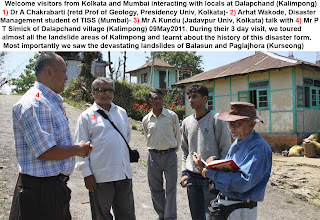 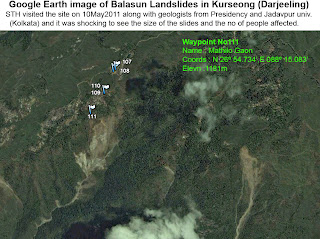 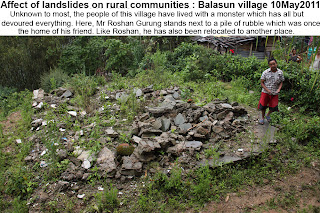 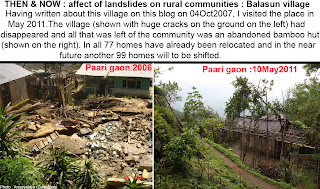 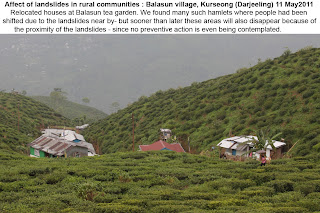 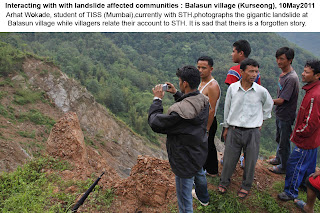 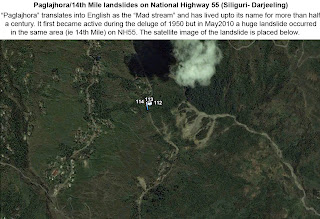 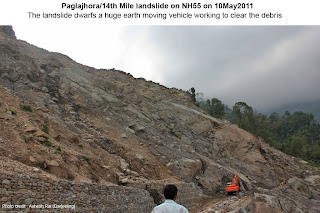 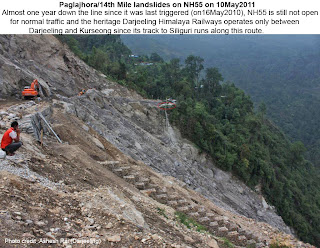 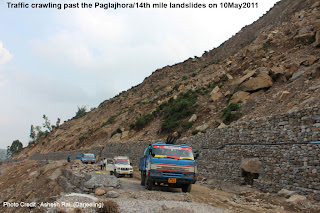 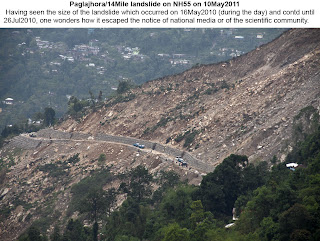 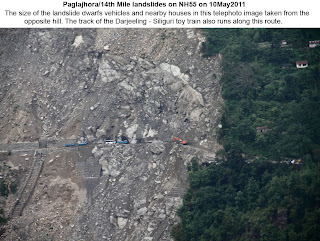 This week, we were lucky to have Dr A Chakrabarti (retd Professor of Geology, Presidency University, Kolkata) and Mr A Kundu (Jadavpur University, Kolkata), who were here for three days (09-11May2011) to document the history of  landslides in this area as a part of a Govt of W Bengal project.
Besides them STH also has Arhat Wakode, a 22yr old scholar from Jamshetji Tata Centre for Disaster Management, TISS, Mumbai who is interning with us for a period of two weeks.
After spending 09May2011 visiting the many landslide areas near Kalimpong and talking to affected people, we were in Kurseong on 10May2011 and visited the Balasun and Paglajhora landslides.
Despite having written about Balasun and Paglajhora landslides earlier I was shocked to see the sheer size of both these landslides; the adverse impact of which on the lives and economy affected people was very apparent. I therefore wonder how the media has only glossed over both disasters. I have uploaded large size photos to put both these in the correct perspective.

Praful Rao
Posted by SaveTheHills at 9:55 AM 2 comments:

Grass test in landslide zone to protect soil
RAJEEV RAVIDAS
Kalimpong, May 6: A Kalimpong-based NGO has started a project on an experimental basis to promote the planting of a grass that can control soil erosion in landslide-prone areas.
The NGO, Save The Hills, has distributed 15 gunny sacks of vetiver or khas-khas grass at cost price to different groups for planting in the landslide-prone areas of Chibo-Pashyor and Sindebung on the fringes of Kalimpong.
The grass was also given to two other NGOs, which are working in remote areas of the subdivision, promoting agriculture and spreading awareness on the measures needed to arrest landslides.
“Vetiver is a tough grass native to south India. Even though vetiver is being used the world over to check soil erosion and for slope protection, this is the first time that we are trying out the grass in these mountains for erosion control and slope stability. This is very much an experiment since we found bamboo to be not too suitable for soil binding once the rainfall crossed a certain threshold,” said Praful Rao, the president of the STH.
Rao said if the experiment proved successful, the NGO may start vetiver plantation on a much larger scale, especially in the rural areas where farmers are losing land continuously because of erosion by jhoras.
“What is special about vetiver is that its dense fibrous roots go vertically into the soil over a four-five year period. Its roots are normally three-four metre long. Some call the grass ‘living soil nailing’ in reference to an engineering technique used to prevent landslides. The grass is also used as fodder and its stems as fuel,” he added.
Landslides are taking place with increasing frequency in the hills, killing people, destroying properties and eating up land. Although experts talk about a comprehensive landslide prevention plan, no initiative has been taken to put in place a mechanism to tackle the problem.
“Such a plan requires huge resources which would certainly require the government's involvement. Ours is a small attempt to help in landslide prevention,” said Rao.
Even though the STH was formed four years ago mainly to raise awareness on landslides, it has managed to set up an SMS-based early weather warning system and put in place automatic rainfall gauges in Darjeeling, Kalimpong and Kurseong to continuously monitor rainfall.
The STH president regretted that even though the National Disaster Management Authority talked about a paradigm shift in disaster management from a relief-centric regime to one which believes in prevention and preparedness, the opposite is practiced at district and subdivisional levels.
“The district disaster management plan is nothing more than a contingency plan which lays down action by different government agencies in the event of a disaster,” he said.
Praful Rao
Posted by SaveTheHills at 6:36 AM 4 comments: 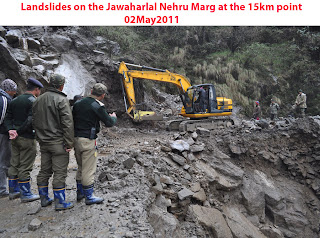 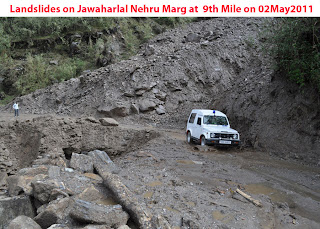 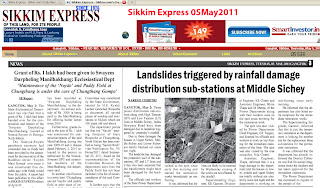 Most landslides which occur in the Darjeeling - Sikkim Himalaya are rain induced and therefore knowing when, how much, and how heavy (ie intensity) of rainfall is important for us working on landslides in this area.
Fortunately, technology and the internet allows even the lay person to keep a tab on rainfall  and here is an example of the weather forecast in this region, the actual weather/rainfall over Kalimpong and the satellite picture on 01May2011 around the time we had heavy rain:- 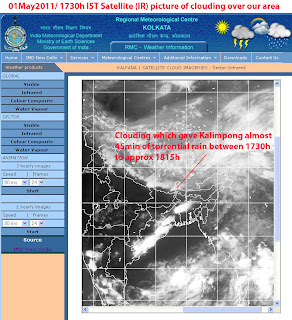 Comment by Praful Rao
The forecast,  severe weather warning and the satellite photo are from here.