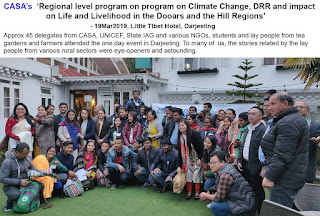 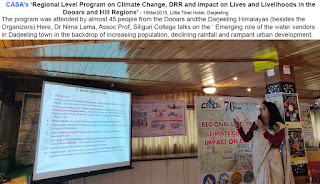 Major issues highlighted:
·       Critical water security problems in the entire Dooars and mountain regions.
·       Food Security in the mountains almost non-existent with the rural youth not interested in farming due to low yield, crop disease, water shortage, human- wildlife conflict in the backdrop of climate change.
·       Total focus on cash crops in mountain agriculture has led to a decline in cultivation of traditional crops such as millet, barley and even vegetables.
·       Decline in cash crops in the mountains: traditional crops such as ginger, oranges and even cardamom have almost disappeared with newer crops such as kiwi fruit, coffee likely to replace them. The moot question is when? –with the most important functionaries ie the relevant government departments being obsessed with other issues. The only viable cash crop in the mountains being broomsticks today.
·       While MNREGA project generates some employment for families, it has totally failed in promoting skills among the rural hill folk.
·       Tea production and the quality of tea has declined both in the Dooars and Darjeeling hills due to migration, triggered by low wages and tea garden companies slowly withdrawing benefits such as uniforms, homesteads, subsidized kerosene and power bills.
·       Large scale unemployment in the Dooars belt leading again to migration and human trafficking by organized gangs.
·       Regular flooding with no little or no warning in the Alipur Duar region due to rain in the mountains of  Bhutan which charges the Torsa and other rivers quickly and suddenly.
·       Rampant child labour in the Dooars with children working in factories in Bhutan on very low wages (Rs 50/day).
·       Extreme and erratic rainfall and temperatures compounding problems.
·       Emerging and powerful role of the water vendor in Darjeeling town in a scenario where the burgeoning population, declining rainfall has resulted in demand for water far outstripping supply. Little or no heed however, being paid to the quality of water being supplied.
·       Child –centric DRR

Posted by SaveTheHills at 8:53 AM No comments: