Where its raining and where its not : North Bengal and Sikkim (Jun2022) Posted by SaveTheHills at 3:24 PM No comments:

The north east of India and Bangladesh are no stranger to flooding - which is an annual event. This year the flooding started in May2022 but peaked in mid June2022 with rainfall records of more than a century being broken.

Meteorological conditions from 1Jun22 to 20Jun22

Meteorological conditions which led to the extraordinary rainfall in east India and Bangladesh were as follows:
a) An east west trough of low pressure existed for almost 3 weeks from western India thru Bihar, Sub-Himalayan West Bengal to Assam.
b) Westerly winds prevailed in much of mainland India as a result, both west and central India are, at the time of writing deficient in rain.
c) There was a persisting lack of weather activity in the Bay of Bengal with no lows or depressions forming for over a month.
d) Strong southerly wind flows to northeast India from the Bay pumped in extraordinary amounts of moisture into the region (see below). 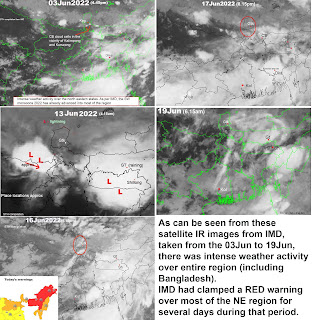 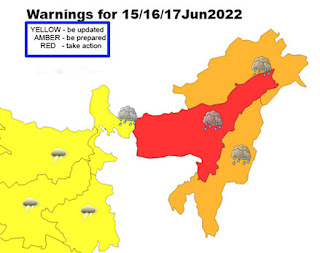 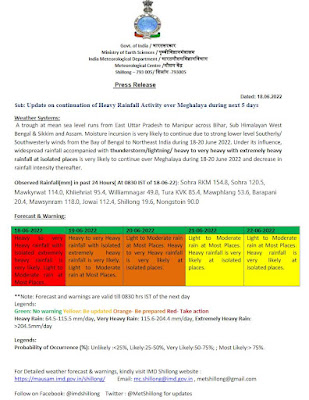 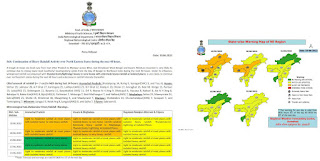 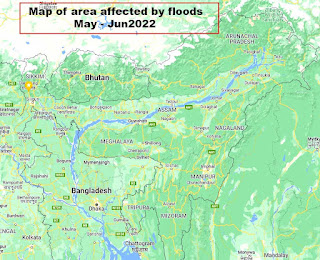 Indian states Assam, Meghalaya, Sikkim, and Tripura were severely affected by the excessive rainfall. The deluge started in May itself, when Assam got 62% above normal pre-monsoon rains (Zaman, 2022).
Some residents of Hojai district (Assam) alluded to faulty dam operations also being one of the causes of the deluge, “Even if there was a flood earlier, it used to take two to three days for the whole village to be submerged. This time, the entire village was submerged within 10-12 hours.” (Zaman, 2022)

Affected areas (Bangladesh)
Bordering the country of Assam, Bangladesh also faced the same wrath. It has been observed that in 122 years such flooding in the Sylhet region in Northern Bangladesh has not been observed. One of the fundamental reasons for the worsened condition of Bangladesh was the cascading water coming from the hills of Meghalaya. Assam and Meghalaya have received an excess of 125% rainfall as on 16Jun22. 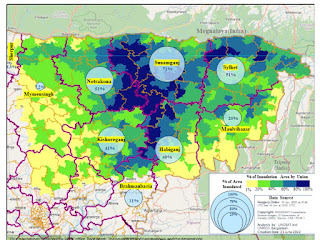 'Heavy monsoon rains and water from upstream in India's northeast have inundated large parts of the Sylhet division, leaving millions of people marooned and triggering a humanitarian crisis. The flash floods swept away homes and inundated farmlands, forcing families to seek shelter on higher ground and temporary flood shelters, while power cut is making life miserable. Experts considered the flood worse than the ones they had experienced in 1998 and 2004. The crisis struck at a time when the people of the division were recovering from unexpected recent floods that hit in late May. An estimated 7.2 million people are affected
by this sudden flash flood and water congestion in nine northeastern districts of Sylhet, Sunamganj, Moulivazar, Habiganj, Kishorganj, and Netrakona, Brahman Baria, Mymensing and Sherpur. Among the nine districts, five heavily impacted are Sylhet, Sunamganj, Moulivazar, Habiganj and Netrakona. As many as 472,856 people have been taken to around 1,605 shelter centres in a combined effort of the Army, Navy,
Fire Service, and the local authorities, according to the Ministry of Disaster Management and Relief (MoDMR). Many households are isolated due to floods, while some have taken shelter in open areas. The safety and security of women and girls in those households are at high risk'- (Source: UN, Bangladesh) 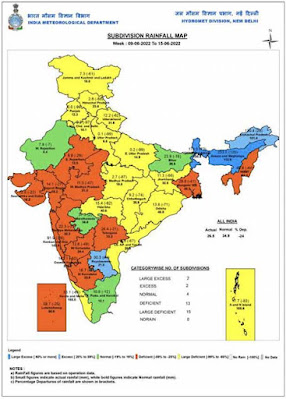 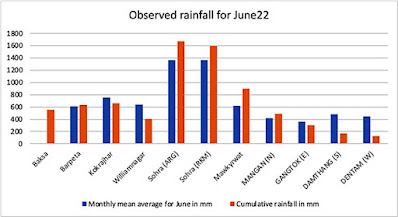 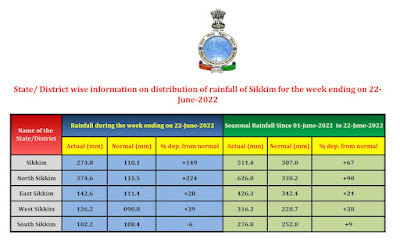 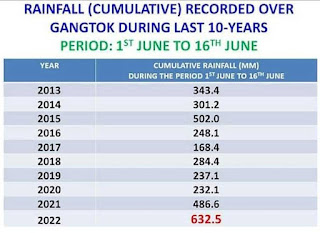 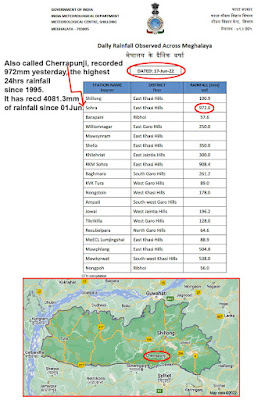 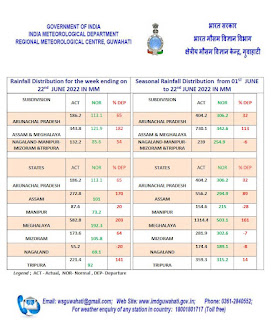 Impact of the Deluge (India)
The extreme rainfall resulted in floods and landslides  which severely impacted large swathes of the North East Region. Critical communication networks in terms of the Indian railways and National Highways (NH) were disrupted and Tripura faces acute shortage of essential commodities as parts of NH 6 (connecting Tripura, Mizoram, Manipur to the rest of the country) under Meghalaya's Lumshnong area have been affected by landslides.

Some of the roads impacted in Sikkim due to many large and small-scale landslides are:

Latest report by the New York Times reports at least 116 fatalities due to flooding, lightning strikes and landslides in India and Bangladesh (NY Times, 2022). The Humanitarian Aid International reported that as of 22Jun22 there were 28 districts, 2,930 villages with over 19 lakh people affected and 54 fatalities in Assam.

Given below are statistics from the Assam State Disaster Management Authority from their Daily Flood Reports, from 16Jun22 - 19Jun22.

Impact of the Deluge (Bangladesh) 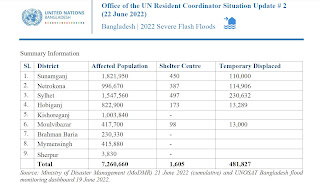 The UN report is placed here

Impact of the Deluge (Bhutan)
Information not available 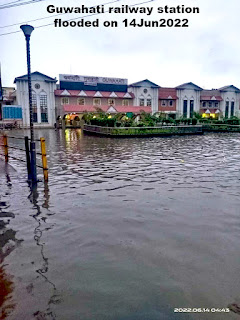 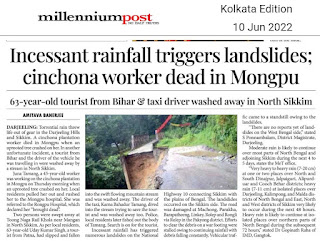 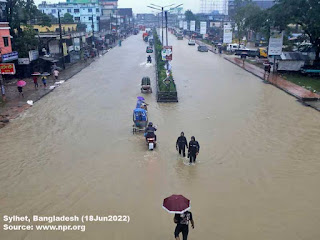