A welcome development for North Bengal (from the Telegraph 25Feb2013)

Posted by SaveTheHills at 2:43 PM No comments: 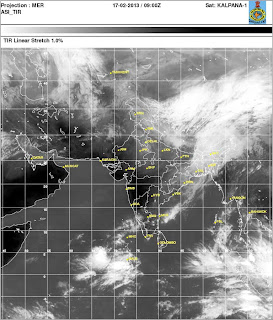 It has been almost bone dry here after the withdrawal of the south-westerly monsoons in Sep2012 and so the sudden, albeit light showers, which came down in Darjeeling district and which resulted in snowfall in some areas of Sikkim and Bhutan as a result of a western disturbance moving through the northern parts of Indian sub-continent was wholly welcome.
This rainfall though meagre, will certainly increase the greenery in our water-starved forests and will hopefully result in less devastation of our forests due to fires besides recharging so many of our thirsty natural springs.
Rainfall data from STH, ARG (automatic rainfall gauge) in Kalimpong:
16Feb2013 : 16mm
17Feb2013 : 9mm


Praful Rao
Posted by SaveTheHills at 7:41 PM No comments:

Lest we forget : Sikkim earthquake of 18Sep2011 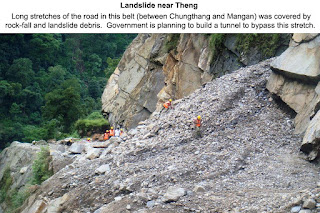 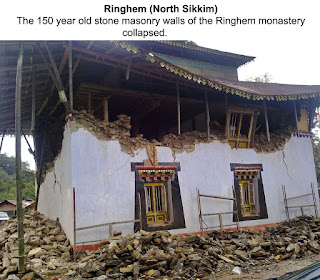 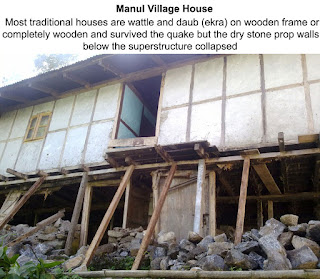 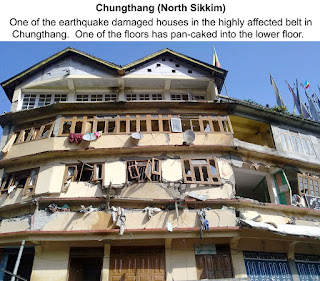 We are still recovering from the reverberations of the Sikkim Earthquake five months after September 18th. We have during these months tried to understand what happened and to slowly rebuild our lives.
Different places in Sikkim and elsewhere have suffered damages to different degrees, but it is Chungthang, headquarters of the Northernmost Subdivision of Sikkim, that is the “epicentre of damage”. As an engineer, the after quake visit to Chungthang has left a lasting impression on me. During our one day survey of damaged private houses, one question that kept cropping up in my mind and in the mind of other observers is “why is the damage so much greater in Chungthang than in other parts of Sikkim”. It seems as if a magnitude greater earthquake had struck Chungthang compared to the rest of Sikkim.
Like countless others I have trawled through the net searching for information about the earthquake. Most websites agree about the size and type of the earthquake and that it originated somewhere near Kangchenjunga but there is very little other solid information.
Drawing circles on Google Earth with a 50 km radius centred at Kangchenjunga, Chungthang is just outside the hypothetical circle. Mangan, 42 km SE of Kangchenjunga, is the closest town to the epicentre and in the general direction of the fault orientation. That cleared up one other mystery as to why, during the post earthquake blackout of information, the rest of the world expected Mangan to be flattened and the news channels came to Mangan looking for “ground zero”. It left the main question unanswered.
In Chungthang, I put this question to an eminent engineering professor from one of the IITs who had flown in privately to visit what he describes as a “living earthquake engineering laboratory”. He felt that the disproportionate destruction in Chungthang was due to the poor engineering and poor construction quality practice here.
During our survey of the damaged structures, we found that the engineering of structures is as bad (or good) as anywhere else in Sikkim. Post earthquake surveys elsewhere have shown that properly engineered structures even if not designed for earthquake loads have withstood earthquakes much larger than the Sikkim Earthquake. The present state of practice in Sikkim is that very little analysis, design and detailed engineering is done in the preparation of the project. The mistry (mason) seems to have the final say in, for example, the size of the column and the reinforcement detailing. Computer analysis has made it easy to design even complicated structures and the relevant codes provide easy to follow rules for any engineering activity. Analysis and design and detailed engineering drawings should be as much part of the project as a plan and an estimate is at present.
I talked to local people and Chungthang’s active civil society members about this. They felt that the large scale blastings during the construction of Teesta Stage III’s tunnels had weakened their structures prior to the earthquake. Their claims were supported by a report from the Department of Mines and Geology made prior to the earthquake. Tseten Lepcha of Chungthang tells me that the locals of Chungthang were actually in the process of demanding group insurance from Teesta III (a 1200 MW hydro project with dam at Chungthang) project authorities for all Chungthang structures when the earthquake happened.
As an engineer with some geotechnical training, I have also tried to find answers in my field. The location of Chungthang town itself provides some clues. The town is constructed on a triangular river terrace at the confluence of the Lachen and Lachung Rivers. The river could have graded the soil it was carrying and deposited it loosely at Chungthang in the recent past. Locals also confirm that the water table is high because they find water close to the surface when they dig around here. In such conditions, if the earthquake shakes the soil for a longish duration, the ground can, like quicksand, loose all its strength. Engineers call this behaviour of soils “liquefaction”. Loose soils can also magnify the shaking in a phenomenon engineers call “soil amplification”.
Moving away from Chungthang, “are the general observations made by us local people during the earthquake supported by science and engineering?” For instance, we saw that the shaking and damages were much greater along ridges and on hilltops in Sikkim. This is supported by research and surveys in other parts of the world. This is one of the reasons why monasteries and other religious structures which occupy commanding positions on ridges and hilltops were severely affected. Some other related observations and conclusions we have intuitively arrived at regarding the cushioning effect of soil seem contrary to research. As an example, engineers say soil does not cushion earthquake waves but in fact may amplify the shaking. Most of the rock outcrops are on ridges whereas most of the soil are in the hollows between ridges and could explain the seeming discrepancy between research and what we observe. We have to understand that most of the research on earthquakes or any other engineering/science discipline have been conducted in much flatter terrain.
The earthquake has shown that we engineers have failed to provide enough inputs in our structures, whether Government owned or private. The earthquake provides us an opportunity to change and improve the way we build our structures. It also shows us that we need seismologists, geologists, structural and geotechnical engineers working together to understand what’s happened on September 18th in Chungthang and in Sikkim.


Credits :-
The above article was written in early 2012 for a local newspaper, five months after the 6.9 Sikkim Earthquake of 18Sep2011. The author Mr Pemzang Tenzin is an engineer by profession and also a farmer based in Mangan, Sikkim, India.
Photo credit :- Mr Deepak Sharma, Sikkim

Posted by SaveTheHills at 11:02 AM No comments: 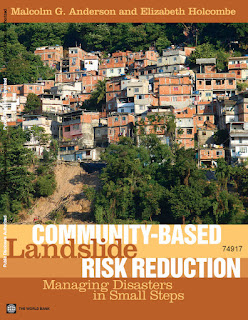 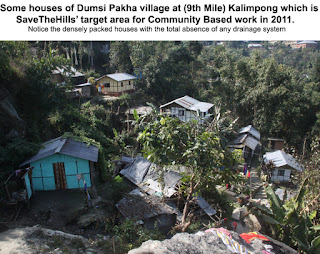 Abstract from the above book:

This book has two main aims: to demonstrate to international development agencies, governments, policy makers, project managers, practitioners, and community residents that landslide hazard can often be reduced in vulnerable urban communities in the developing world, and to provide practical guidance for those in charge of delivering Management of Slope Stability in Communities (MoSSaiC) on the ground. The purpose of the book is to take readers into the most vulnerable communities in order to understand and address rainfall-triggered landslide hazards in these areas. Community residents are not just seen as those at risk, but as the people with the best practical knowledge of the slopes in their neighborhood. As used here, 'community based' means engaging and working with communities to find and deliver solutions to landslide risk together. This approach leads governments to develop new practices and policies for tackling landslide risk. This book standardizes those elements of MoSSaiC that have led to its successful implementation in the Eastern Caribbean, and that are essential to the overall objectives (such as community engagement, mapping localized slope features, and broad drainage design principles). The book's nine chapters provide guidance to project managers and practitioners on the entire end-to-end process of community-based landslide risk reduction. While certain chapters are more directly relevant to one audience than another, it is helpful for all audiences to read the 'getting started' section of each chapter and be alerted to the nine project milestones.


Comments by Praful Rao
SaveTheHills is in contact with Prof Malcolm G Anderson, co-author of the book - which features a photograph and reference to Dumsi Pakha, a small village in Kalimpong (see page 41 of book) which is particularly vulnerable and has a terrain and problem similar to the areas mentioned in the publication.
My thanks to Drs Malcolm Anderson and Elizabeth Holcombe.
The book is available as a free download from here

Posted by SaveTheHills at 10:13 AM No comments: