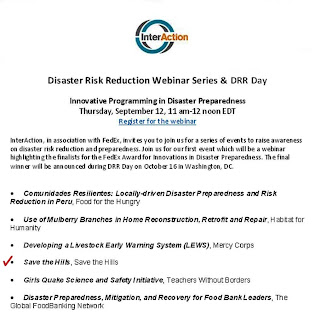 On 16Aug2013, we informed you that STH had applied for the Fedex Award for Innovation in Disaster Preparedness organised by InterAction and that STH had been shortlisted as one of the six finalists.
Today the names of the six organizations have been announced and and we're proud to be listed in the same ranks as global NGO giants like Mercy Corps and Food for the Hungry.
At present we're busy in preparation for the webinar to be held on 12Sep2013 in which all participants will be highlighting innovations and partnerships in disaster preparedness and risk reduction.
Updates will follow.

Satellite Imagery : How reliable is it for rainfall / adverse weather prediction?

Satellite Imagery (both Vis and IR) is an invaluable tool for the lay person to obtain information on the formation,development and movement of weather systems. It has been a part of the STH blog for the past 3 yrs and is an integral part of the "STH Stormwatch" series in which we monitor weather systems that form in the Bay of Bengal.
This information, earlier only available to scientists and meteorologists is now available to anyone with internet connectivity. Having said this however, it  is not advisable to depend on satellite images exclusively as a method to predict rainfall / adverse weather, the next few images will explain why : 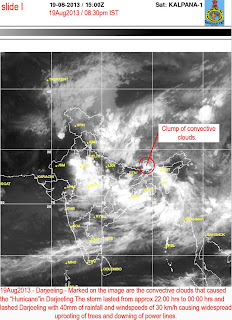 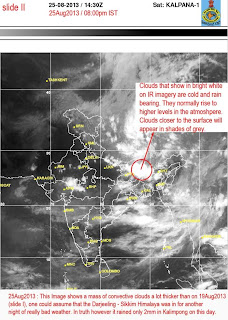 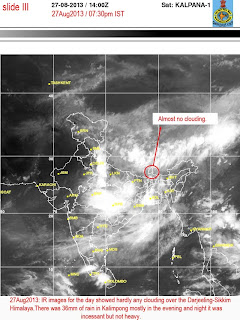 Thus it is clear that satellite images though vital for early warning CANNOT give foolproof warnings. For those interested the link to the Darjeeling "Hurricane" is here.

STH Stormwatch : "Hurricane" over Darjeeling (19Aug2013) and a persistent storm near Kolkata 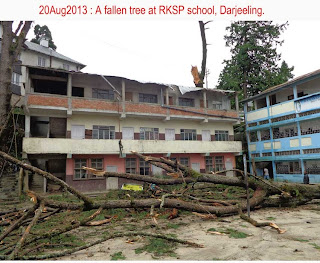 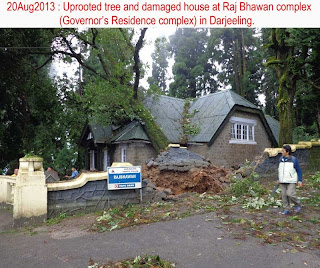 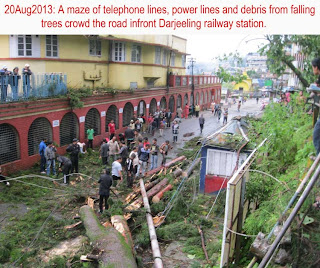 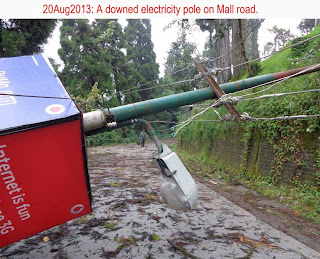 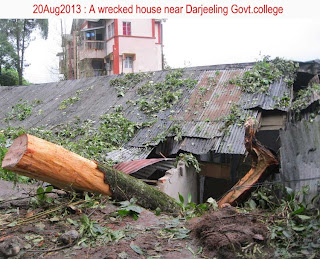 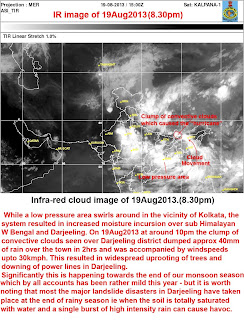 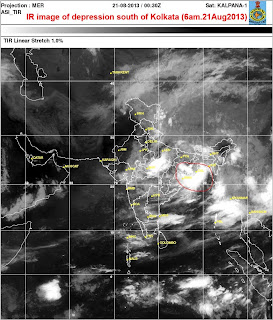 August 2013 has seen the development of a number of low pressure areas in the Bay of Bengal, one such low was reported by IMetD on 19Aug2013 and which has since intensified into a depression.
As per IMetD report on 20Aug2013 (evening) the depression was practically stationary south of Kolkata, leading to a nightmare scenario where densely populated regions and ill trained/prepared people living therein are exposed to incessant, heavy rain.
This weather activity in the Bay definitely impacts rainfall over Darjeeling and Sikkim Himalayas which has seen an increase in thundershower activity over this area with moisture laden clouds continuously being pushed in from the Bay - all this happening at the end of the monsoons when the soil is saturated with water.
The "hurricane" of 19Aug2013 which pummeled Darjeeling town is typical of cumulonimbus cloud activity resulting in sharp, heavy downpours with high winds. Known details are as follows :-
a) Time of Occurrence : Approx 2130-2330h IST
b) Max wind speed recorded : 30kmph
c) Rainfall : 40mm
What is dangerous in all this is that Darjeeling district in locked in fierce political turmoil with the W Bengal State and disaster management may well be the last thing on anyone's mind. 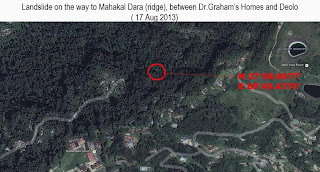 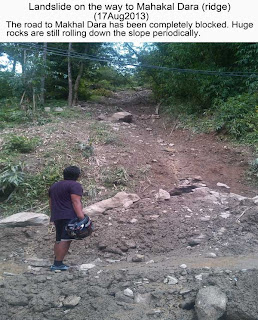 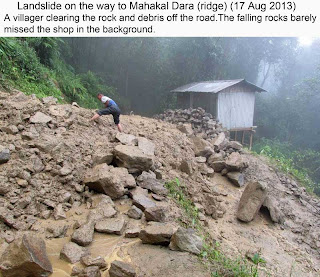 On 17Aug2013 between 0400 hrs - 0500 hrs, a landslide occurred on the road to Mahakal Dara from Kalimpong town. Earlier rockfall and slide instances in this area during intense rain is documented here  and here.
Known details of the slide on 17Aug2013 are as follows :-
Photo credit : Mukesh Sharma,

Posted by SaveTheHills at 7:35 PM No comments:

STH shortlisted for FedEx award for Innovations in Disaster Preparedness 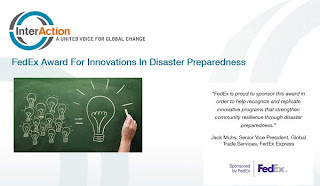 On 29Jun 2013, STH had applied for the FedEx Award for Innovations In Disaster Preparedness organized by InterAction which is an alliance of U.S based international organizations (with more than 180 NGOs as members, working around the world).
I am very pleased to inform you that STH has been shortlisted as one of the six finalists amongst applicants from all over the world. 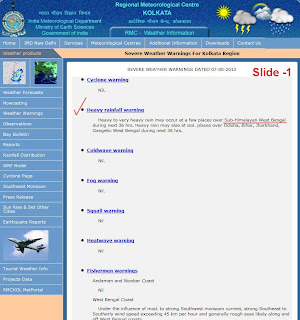 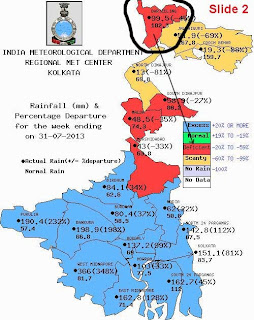 After Cyclone Nilam which battered Andhra Pradesh killing 24 people in Oct2012 and the recent (Jun2013) Uttarakhand disaster, bureaucrats and politicians of the states took pot shots at meteorologists for not giving adequate and more accurate warning about the onset/intensity of adverse weather due to which the devastation occurred. While this sort of behavior maybe habitual amongst babus and their political masters, modern technology places much information about the occurrence/ movement of weather systems in the hands of an internet user and STH has tracked all major weather systems in the Bay of Bengal since 2007.
However, the fact remains that meteorology is still a developing and inexact science and this is problem is further accentuated in remote mountainous regions due to non-availability of sensors and data from such areas which are required to make weather predictions more accurate.
Towards this end, the IMetD website posts a heavy rainfall warning over SubHimalayan West Bengal and Sikkim for almost 80% of the entire monsoon period (see example-Slide1) whereas, in actual fact, we had a 45% deficiency in rainfall during the past week (Slide 2) and also in July2013.
For someone working in Disaster Management this sort of contradiction poses a predicament as crying wolf too often defeats the very purpose of the warning.
The installation of AWS and ARG stations in mountainous areas is a step in the right direction as this would enable better monitoring of rainfall patterns in the hills and the planned installation of Doppler radar in Sikkim would certainly go a long way towards more accurate meteorological predictions in this area.

Sand mining (without clearance), banned in India....but will the ban work?

Excerpt from the Business Standard of today

The National Green Tribunal on Monday banned mining or removal of sand from river beds across the country without an environmental clearance, amid the uproar over the suspension of an Indian Administrative Service officer, Durga Shakti Nagpal, who had cracked down on the sand mafia in Uttar Pradesh.
The tribunal noted the loss caused to the state due to illegal sand mining could run into lakhs of crores. The order was given on a plea alleging that such activities were going on in UP with the "wilful connivance" of its state machinery. 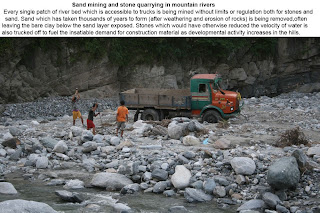 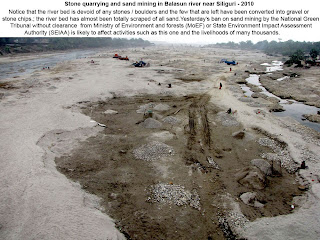 However, almost as soon as the ban has been imposed, serious doubts have been expressed about the efficacy of the NGT ban (see below) :- 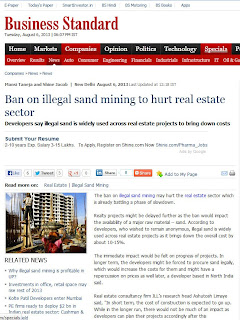 Nothing other than raw and naked greed is behind the uninhibited plundering of riverine resources for very short term benefits.
Rather coincidentally, I had expressed my views and reservations about sand mining, years back in a post on this blog. You can read it here

Posted by SaveTheHills at 6:49 PM No comments: 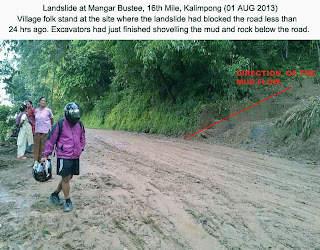 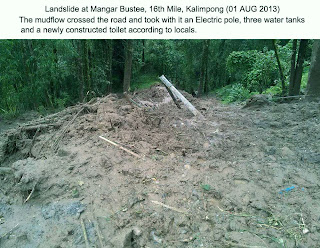 Posted by SaveTheHills at 7:39 PM No comments: 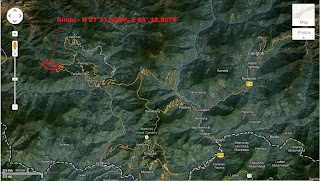 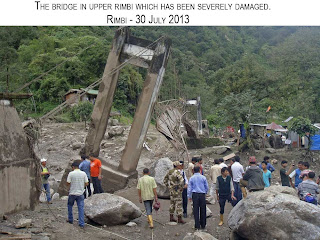 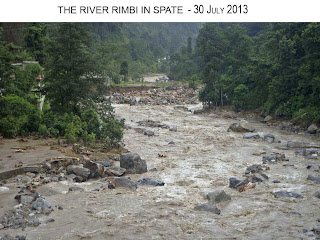 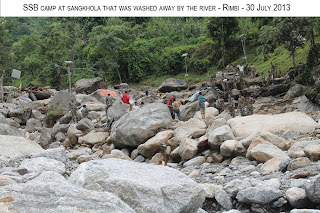 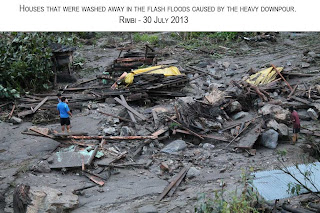 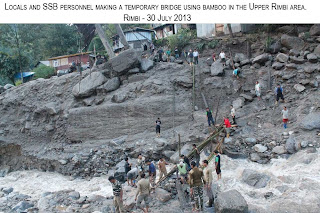 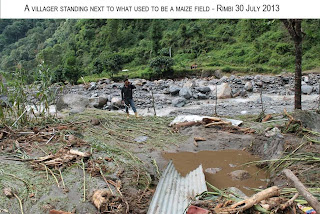 1. On 30 July 2013 a 'cloud burst' was reported by locals in Rimbi, Pelling (W. Sikkim). There was a very heavy downpour in the late afternoon which caused flash floods around 6 pm in the evening.
The rainfall data  is unfortunately not available.
2. Perhaps because the whole scenario occurred during daylight, there was no loss of life. A report on the loss/damage is as follows:-
Photo Credit and Story
Mr Nima Tashi,
Sikkim

Posted by SaveTheHills at 4:56 PM No comments: 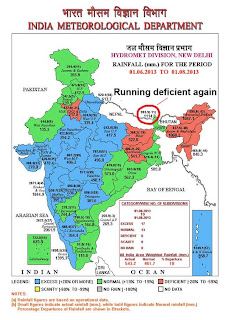 The month of July2013, what was characterized by the formation of a number of low pressure areas mostly in the Bay of Bengal, off the coast of Andhra Pradesh or Orissa. These systems then moved inland initially on a northwesterly track and then later on a westerly direction drawing in moisture both from the Arabian sea and the Bay of Bengal.
It was this movement of the systems which resulted in excessive precipitation over central and west India and deficiency of rain in the eastern and the north eastern states.
In our region, Kurseong was the only town which had normal rainfall, the other towns all had less than normal precipitation.
From Aug2013 till the end of the monsoons, we will be tabulating rainfall over Gangtok and a few other places as well.
There were no major landslides in this area in Jul2013, except that on 30Jul2013 at around 6pm IST, what appears to be a 'cloudburst-like' condition in Upper Rimbi (W Sikkim) caused major damage to infrastructure in that area - mercifully there was no loss of life.
Unfortunately, we are unable to get rainfall records of the area.

Posted by SaveTheHills at 1:48 PM No comments: