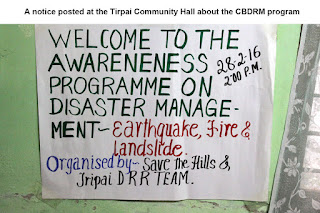 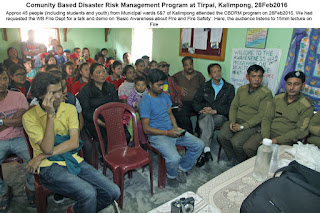 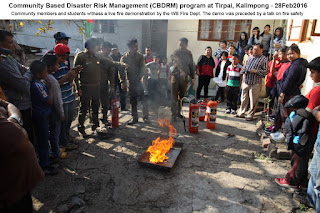 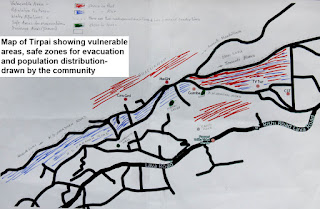 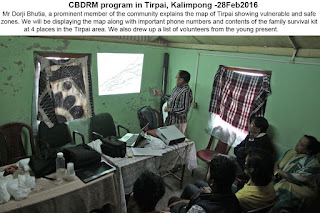 I live in Tirpai, Kalimpong and after our first meeting on 31Jan2016 at my home, the core committee met in mid-Feb2016 following which we continued the CBDRM work at the Maitri Sangh Community Hall in Tirpai bazaar on 28Feb2016.
The WB Fire Dept responded enthusiastically with a lecture on 'Fire Awareness and Safety' which included a fire demo after which we showed a map of Tirpai with the vulnerable and safe zones.
We have drawn up a list of volunteers who will receive training in the future.

My thanks to the WB Fire Dept, Kalimpong Station and Maitri Sangh (Tirpai, Kalimpong) for making the program a success.

Posted by SaveTheHills at 10:30 AM No comments: 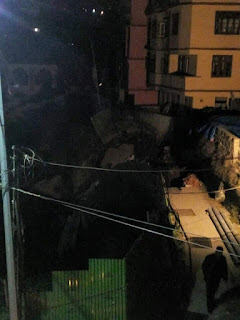 Photo : Voice of Sikkim
Posted by SaveTheHills at 9:54 PM No comments:

While referring to this report, the update on the visit is as follows :- 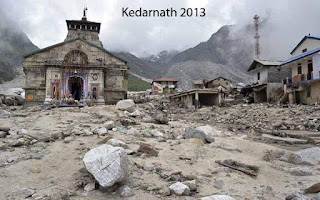 Synopsis of the Report :-

1. During 13 –17 June 2013, heavy rainfall occurred in the northern Indian state of Uttarakhand and led to one of the worst floods and landslides in history, resulting in more than 5000 casualties and a huge loss of property. This event also affected other parts of India including Himachal Pradesh, Haryana, Delhi and Uttar Pradesh, as well as western Nepal and parts of Tibet.

2. In a study by scientists, meteorological and climatic conditions leading up to this rainfall event in 2013 and similar cases were analyzed for the period of 1979–2012.
3. The study also found that such heavy rainfall and widespread flood events have become increasingly frequent in northern South Asia :-
4. The study found that increased levels of greenhouse gases and aerosols in the post-1980 period have caused changes in the upper troposphere and that as a result of anthropogenic climate change, the circulation structure has been modified in such a way that it significantly aggravates rainstorm occurrences in northern South Asia, hence increasing the severity of floods.
5. Also, the occurrence of this June 2013 event during pre-monsoon season in northern South Asia, along with the circulation and precipitation trends in June, calls for the adaptation of risk management strategies in the face of increasingly frequent and strong rainstorms outside the core monsoon months (July–August). Adaptation measures such as developing strategies and policies for flood management in the face of climate-related extreme events are urged.
6. In addition, the amplified upper-level stationary waves and associated dynamics, as revealed in this study, will need to be represented accurately in the forecasting tools revealed in the post-1980 trends is attributed.

" It appears that the increase in aerosols due to pollution, combined with changes in the jet stream due to increasing greenhouse gases, have made June events like the 2013 flood more likely to occur since 1988."
- Jeff Masters, Director of Meteorology, wunderground.com

Praful Rao,
Kalimpong,
Dist Darjeeling
Posted by SaveTheHills at 9:39 AM No comments: 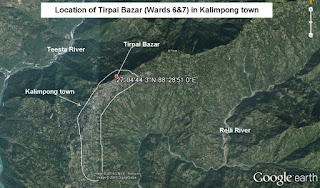 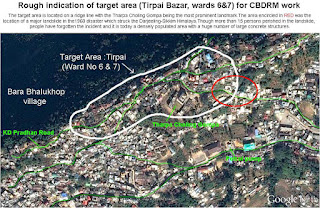 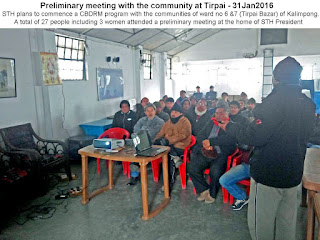 STH has worked on DRR with rural communities earlier.
We intend to carry out DRR work in an urban environment in Tirpai Bazar (which is also where I live). Tirpai lies on the northern edge of Kalimpong municipal limits (see TOP Google Image) and comprises of Ward No 6&7. We estimate the population to be around 2500 (see CENTRE Image showing a very approximate map of the area of intended work).
We held the first meeting with community people at my home (BOTTOM Image) in Tirpai yesterday where I elucidated the hazards and risks we living in the Darjeeling- Sikkim Himalaya are exposed to and what an empowered community can achieve in DRR.
I vividly remember a major landslide near Tirpai in 1968 which killed more than 15 persons; last year too, 2 persons lost their lives close to Tirpai Bazar on 01July2015.
We have formed a core committee of 7 people of this area for taking the work forward and we will be taking help from the civil defense, State IAG and others for this work.