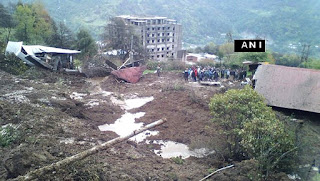 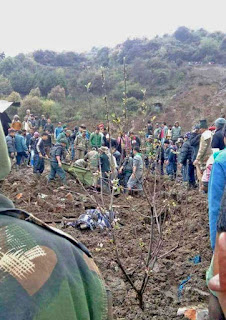 17Apr2016 - 4mm
18Apr2016 - 72mm
19Apr2016 -  8mm
20Apr2016 - 76mm
21Apr2016 - 70mm
22Apr2016 - 83mm
(Source : imdaws.com)
Excerpt from Arunachal TImes
TAWANG, Apr 22: Landslide triggered by heavy rain washed out an entire labour camp killing 16 people at Famla village in Tawang. One out of the 16 dead succumbed to injury on his way to hospital, while three narrowly escaped death.
Famla is located 2 km from Tawang headquarters.
The mishap occurred at around 3.30 AM on Friday when the SP type building where the labourers were putting up was hit by the slide caused due to torrential rain.
District police, Indian Army and local public of Tawang under took rescue operation which lasted for about 8 hours.
“Family members of the deceased have been informed about the accident”, said one of the survivors.
The laborers were mostly from Assam and Nepal.
(Read full story here)
Comment
Well, the pre-monsoon season has literally opened up with a bang!
Sixteen people dead 2days ago and 2 more dying today (as per NDTV) in rain triggered landslides in Tawang, Arunchal Pradesh, India.
What is scary is that the rains which caused these landslides were not the result of any major weather system - the SW monsoon is still a month away and in 2016 it is expected to bring heavier than normal rains (see previous blog).

S W Monsoon 2016 (01Jun-30Sep2016)
Backdrop of the meteorological conditions
1. Though El Nino is still ‘strong’, it is declining and by mid-monsoons, it is expected to reach NUETRAL level. This weakening of the El Nino is expected to push up rainfall especially during the latter half of 2016 monsoons.
2. Some climate models indicate possibility of La Nina effect, which is opposite of the EL Nino during the last months of the monsoon.
3. IOD (Indian Ocean Dipole) though currently slightly negative, is expected to become positive during the monsoons and then become neutral as the monsoon ends. IOD becoming +ve and neutral is good for the monsoon season.
Highlights of the First Stage Long Range Forecast (LRF)
1. Rainfall for the country as a whole is likely to be above the normal (890mm) ie between 104-110% of the long period average rainfall. Quantitatively, rainfall for the country is likely to be 106% (ie 940mm) of the long period average with a possible error margin of +/- 5%.
2. There is 94% probability that monsoon season rains would be normal to excessive and only 1% probability that the monsoon would be deficient.
3. Though the Monsoons are expected to arrive by the due date, more exact forecast will only be possible 2 weeks ahead of the onset.
4. By and large the distribution of rain is expected to be good, however some parts of the NE region and SE parts (parts of Tamil Nadu and adjoining Rayalaseema districts) of the peninsular may have less than normal rain.
Quantitative, month-wise temporal distribution of rain during the monsoons is expected to be good and to accentuate from mid-monsoons onwards.
5. Due at least in part to a strong El Nino, last year we had 14% below average rain in the country but this year we expect 6% above normal rain (890mm).
6. Extremely heavy rainfall events may occur but that can only be predicted in the Medium Range Forecasts.

You can read the Press Brief of the LRF here

Rainfall data of March 2016 and our dying springs.

Though the rainfall maps (top) and the data (above) indicate that the shortfall in precipitation has decreased (from around 80% to 14%) in March 2016, this does not represent the facts on the ground where changing rainfall patterns have resulted in winter rains almost vanishing. So what we have these days is an alternating cycle of abundant rain (5 months in the monsoon period) followed by 6-7 bone dry months.

In this situation, Kalimpong town is today facing an acute potable water crisis - water from the Govt PHE source is supplied only to certain parts of town that too, once in 6 days. The rest of the town and all hotels, many schools and homes are forced to buy water.
But it is in the rural areas all over the Himalayas that a major problem is looming with many natural springs drying up. In Almorah (Uttarakhand) the number of natural springs has dwindled from 350 to 60 in the span of 150yrs.
Some of the obvious reasons for this decline, besides the changing rainfall patterns are:-
Recently, in Sikkim there has been a government intervention at springshed management which have shown positive results but we will have to wait for the long term benefits of this initiative. Elsewhere, villagers are left to fend for themselves as far as finding water sources are concerned and to check the extent of the problem STH carried out a survey in a rural area (Bhalukhop village) on the western face of the Kalimpong ridge line (see map below). 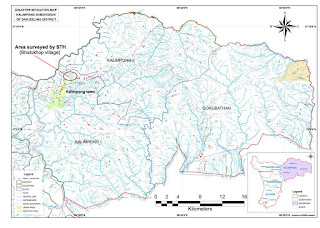 My guide for the survey of the health of springs in Bhalukhop was Man Bahadur Darji, 57, a denizen of Rai Gaon, Bhalukhop. The results are placed below in images, with coordinates of the springs in each image:- 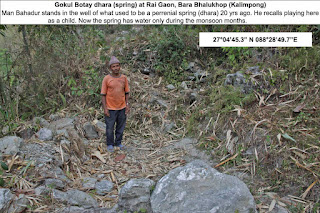 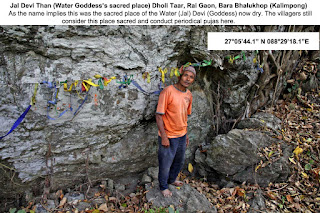 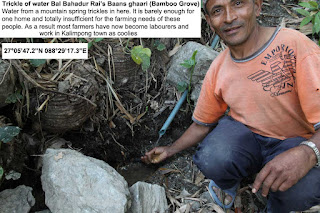 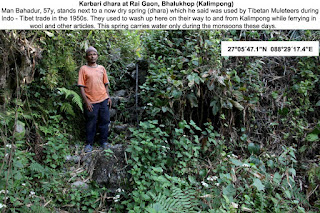 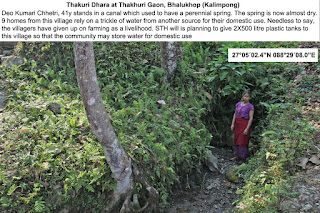 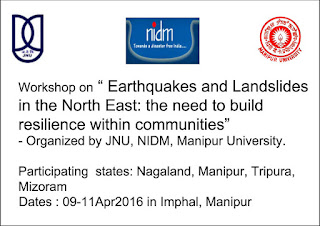 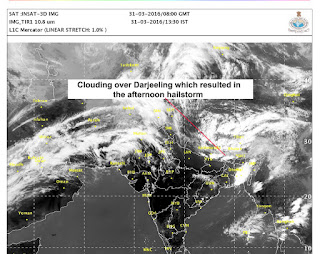 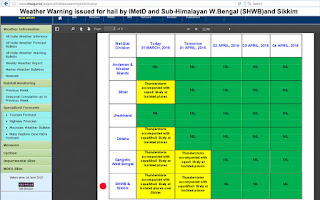 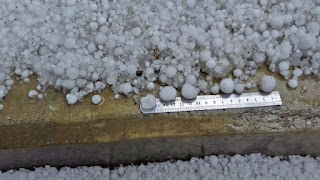 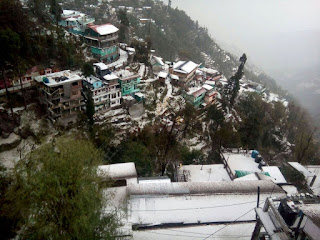 In Kalimpong, where STH is based, the cumulonimbus clouds (top slide) brought in grouchy weather with a lot of lightning and thunder but surprisingly little rain.
IMetD has a weather warning in place for TS (Thunder Showers) and Hail for this region.
Though much of the chatter on social media was on how beautiful Darjeeling looked and ice-skating in Chowrasta, Darjeeling - what was missed was the damage to tin-roofed homes, the traffic jam in Darjeeling town when the schools gave over at around 3pm and perhaps the damage in the rural areas, which is not known at all.

Photo credits :
Compuset, Darjeeling
The Darjeeling Chronicle
Posted by SaveTheHills at 7:36 AM No comments: