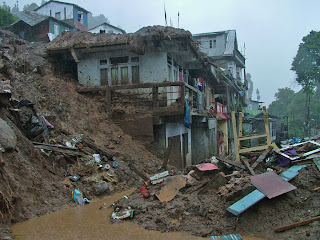 Frymal village, Darjeeling (Cyclone Aila May2009)
FROM DAILYINDIA.COM
Darjeeling (West Bengal), Nov.27 (ANI) : The massive construction of high-rise buildings, a majority of them illegal, has led to a degradation of the soil texture in the Darjeeling Hills area of West Bengal state, and has made the place vulnerable to landslides, feel experts.
A series of landslides has hit Darjeeling and its surrounding areas since May 2009, triggered off by overnight rains and floods.
Local builders seem to have ignored this threat and public concern.
Talking to media persons about the problem, West Bengal Urban Development and Municipal Affairs Minister Ashok Narayan Bhattacharya said the state government has asked the local civic body to take measures to curb illegal construction.
“There is no reason behind the illegal construction. The builders are violating the rules. There is no fear of government in Darjeeling. Nobody has been caught till now. Now, the situation is improving. The situation will only improve when the municipal authorities work together with the local people,” said Bhattacharya.
Geologists say the construction of unauthorized buildings coupled with improper drainage systems has led to landslides in the region in the past.
“Since the end of 1970s and beginning of 1980s, there has been a real estate boom in all countries, and Darjeeling is no exception. There are now innumerable high-rise buildings, and, I do not know whether a building restriction rule still exists. There is no one to look after this. I do not know how they (the builders) are getting no objection certificates for constructing eight to nine-storeyed buildings in the hills,” said Subir Sarkar, a meteorological expert.
Situated at a height of 2,134 meters, Darjeeling was developed as a hill station by the British, who wanted to escape the heat of the plains.
As time passed, Darjeeling town has emerged as a tourist destination.

- Excerpt from Himalayan Beacon of 27Nov2010
Praful Rao
Posted by SaveTheHills at 7:28 PM No comments:

Posted by SaveTheHills at 8:20 AM No comments: 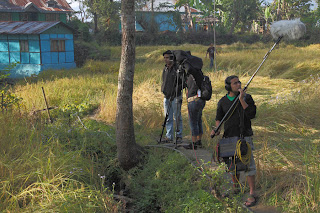 Magic Lantern Foundation (MLF) is a Delhi based non-profit organization working with culture and human rights and using the medium of films and documentaries to highlight issues.
Sometime ago I was contacted by Ms Priyanka Chhabra, a young film director who is currently with MLF about doing a documentary film on "The Need for Adaptation to Climate Change" with special emphasis on the impact of climate change on landslides in Darjeeling in the state of W Bengal (the whole documentary was to be done on impacts of climate change in four states ie Rajasthan, Tamil Nadu, M.P and W.B)
After doing an initial tour of landslide affected areas around Kalimpong a month ago, the MLF team was with us for the last 3 days shooting at the chosen landslide sites and documenting the experiences, helplessness of many, many anonymous landslide affected people in the vicinity of Kalimpong.
The above photo shows a part of the team shooting in the paddy fields of Sindebung village  (a badly mauled area in the underbelly of Kalimpong which has been featured in this blog numerous times)


Praful Rao
Posted by SaveTheHills at 7:29 AM No comments: 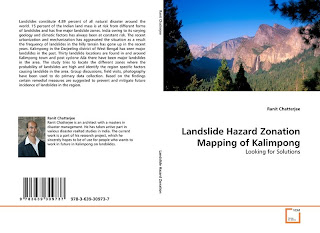 Ranit Chatterjee is a young,effervescent and effusive man who is now in UNDP.
He was with us (STH) at Kalimpong for almost 3 weeks in Mar2010 as a part of internship from Tata Institute of Social Sciences (TISS), Mumbai. While here, he associated himself with all our activities and almost became a part of the community at CHIBO (a village in a highly landslide prone area of Kalimpong) where he stayed for much of his internship here.
I am sure that the book authored by him is the outcome of this stay here and look forward to reading it, I also I look forward to more students from TISS coming over for their internship (we met them during our participation at the 1st Indian Landslide Congress, at Lucknow on the 01-02No2010).

Praful Rao
Posted by SaveTheHills at 3:37 PM No comments: 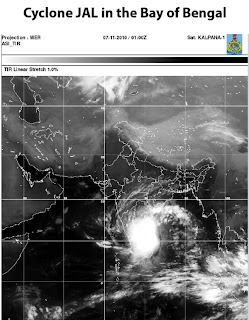 Even though Cyclone JAL (which is literally cooking up a storm in the Bay of Bengal) is unlikely to affect us, it is our endeavor to track all cyclones and depressions in the bay (since most of the landslides in the Darjeeling-Sikkim Himalayas are rain-induced).
As such this year, there have been three cyclones which formed in the Bay of Bengal starting with Cyclones LAILA (20May2010), GIRI (22Oct2010), and JAL (07Nov2010).
Luckily, none of the cyclones or depressions resulted in extreme rainfall events and consequently there were no major landslides in Darjeeling district (not so with Sikkim where landslides caused major problems especially along the highways and roads this year). 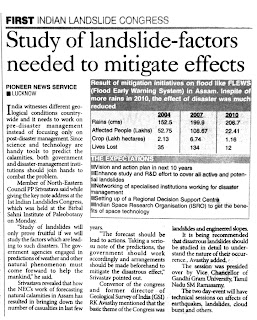 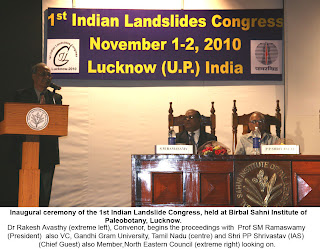 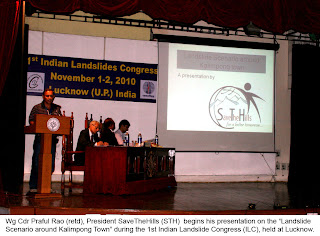 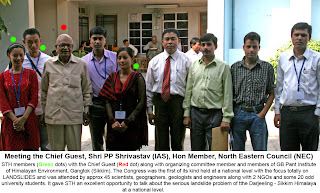 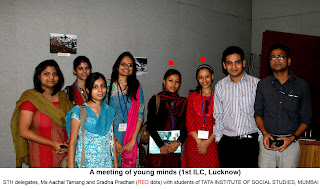 4 Members of STH (including the undersigned) attended the 1st ILC at the Birbal Sahni Institute of Paleobotany, Lucknow on the 01-02Nov2010. While the Congress gave us an excellent opportunity to interact and learn from some of the finest minds in the field of landslide research, it also allowed us to talk about the serious landslide problem in the Darjeeling Sikkim Himalaya to a national audience.
I am thankful to Dr Rakesh Avasthy and the organizers of the 1st ILC for holding this congress on a form of disaster which otherwise gets a backseat in all disaster management meetings.

Praful Rao
Posted by SaveTheHills at 11:34 AM No comments: