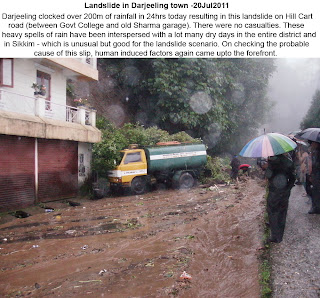 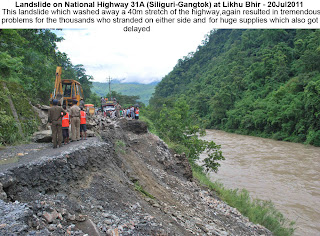 The rainfall data (for the past 24hrs) from the 3 Automatic Rainfall Gauges (ARGs) at Darjeeling, Kurseong and Kalimpong reveals that it rained heaviest in Darjeeling (200mm+), followed by Kurseong (110mm+) and then by a rather dry Kalimpong (50mm).
The landslides which resulted are shown above.

Praful Rao
Posted by SaveTheHills at 8:10 PM No comments: 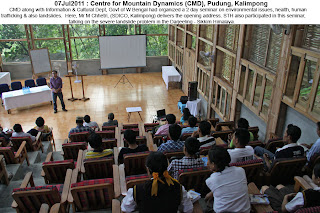 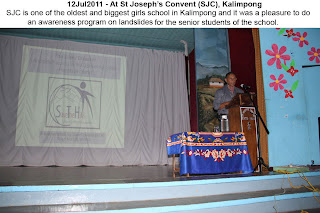 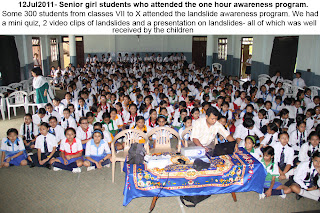 Praful Rao
Posted by SaveTheHills at 12:31 PM No comments:

From the Press (The Statesman) on 05Jul2011 : Move to create a safer Hills


Darjeeling,5July :-
Starting from tomorrow, the newly formed disaster management committee for the Hills will survey the municipal wards  and different blocks every Wednesday. The 15 member disaster  management committee that was formed on 23June has members from the Darjeeling Municipality, Civil Defense, Relief department, the Public Works Dept (PWD) and Public Health Engineering (PHE).
The incessant rainfall in the hills has triggered landslides in Kurseong and other parts of the hills. Last month a landslide in Kurseong claimed 4 lives.
Recently, on a visit to the landslide affected sites, the north Bengal development minister, Mr Gautam Deb said that the disaster management system in the hills was not well equipped and lacked trained people.
"The members of the committee will make a study and inspect the municipal wards and blocks every Wednesday. Sewage, drainage system,pipelines construction of buildings will also be checked" said Gopal Rai, a civil defense official......
To create awareness among common people on disaster management issues, campaigns will be organized across the hills from 08 July starting from Takdah block, 25km from Darjeeling.
"The committee will do its best to raise awareness among the people of the hills and steps will be taken to mitigate the outcome of natural disasters....."
"Negligence of locals have often contributed to natural catastrophes, for example the recent landslide in Nepali Girls Higher Secondary School, Darjeeling took place due to the leakage of pipeline of the hotel located above the school" said the official.

STH would like to thank Compuset (Darjeeling) for the photo.
Posted by SaveTheHills at 10:29 PM No comments: 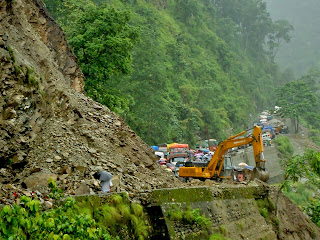 The National Highway31A links Siliguri (in North Bengal) with Gangtok, the capital of Sikkim. Today, the STH ARG installed in Kalimpong (which is almost 4000', directly above this area) recorded 80mm of rainfall, mostly between the wee hours of the morning and 1100hrs.
This was the result.

* - Fatal landslide at St Mary’s, Kurseong where 4 people died.
** - Rockfall at Goethal’s in Kurseong, one house damaged, one injured.
Posted by SaveTheHills at 10:58 AM No comments:

Milestones : Workshop on the "Role of Media in Disaster Risk Reduction" at Rumtek (Sikkim), 01-02Jul2011 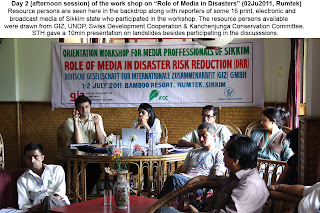 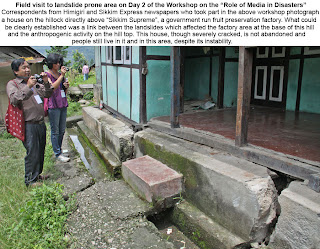 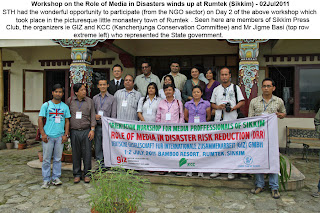 Comment by Praful Rao
STH wishes to thank the organizers for making the few hours that we spent at Rumtek most meaningful and memorable; we also request our friends in the Sikkim Press Club to join us in highlighting the long neglected issue of landslides in the Darjeeling-Sikkim Himalaya so that it may be viewed in the correct perspective at the national and even at the international levels.
The first day's program (01Ju2011) can be viewed here
Posted by SaveTheHills at 7:27 PM No comments: