History revisited : Slideshow on the Darjeeling Disaster of 1950.


Human memory of disasters is often flawed and very short-lived. As such it is important to chronicle and preserve these records as accurately as possible and the above slideshow on the ‘Jun1950 Darjeeling Disaster ’ is an effort this direction.
Not much data exists on the Jun1950 disaster which struck the Darjeeling district and whatever is available is, at best sketchy :-

While rummaging through records for this event on the internet, I stumbled onto the ‘Annual Report of 1950’ of St Joseph’s School, Darjeeling which had a rather quaint account of the disaster – that of a student in the school and I have included it in the slideshow.
I also was extremely fortunate to discover that Mr Durga Das Pradhan of DAS Studio, Darjeeling, who had given me these photographs sometime back, was also the photographer who had taken these images more than 60yrs ago! As such I was lucky that he could pinpoint the locations where the landslides had taken place in the vicinity of Darjeeling town.

Posted by SaveTheHills at 12:14 PM No comments:

All about rainfall : From the Telegraph today (21July2013) 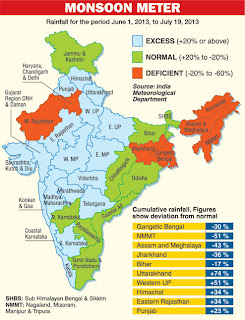 New Delhi, July 20: A torrential downpour that washed Delhi today and the rainfall that devastated Uttarakhand last month could be portents of shifts in the monsoon’s behaviour that have also shown up as rainfall deficits in eastern India, scientists say.
Eastern India is the only zone among the country’s four meteorological regions that has as a whole experienced deficit rainfall since the monsoon season started this year, while the traditionally arid northwest is unusually wet.
Bengal’s Gangetic plains have had rainfall 30 per cent below the expected average so far, delaying preparation of paddy seedbeds.
While Uttarakhand’s extreme event on June 16-17 may explain its 74 per cent excess rainfall, Uttar Pradesh, Punjab and even eastern Rajasthan have recorded high above-average figures.
“India’s north appears to be stealing rain from the east,” said Madhavan Rajeevan, a senior atmospheric scientist and programme director at the National Monsoon Mission, a research initiative launched last year by the Union earth sciences ministry.
While the movements of moisture-bearing winds and low-pressure systems may explain the heavy rain in the north, scientists say they are intrigued by recent trends pointing to persistent rainfall deficits in the east.
“We’ve seen rain deficits in parts of the east and Northeast over the past five years but we don’t fully understand the underlying mechanisms or even whether this is a long-term trend,” Rajeevan said. “We’ll need more observations, more research.” 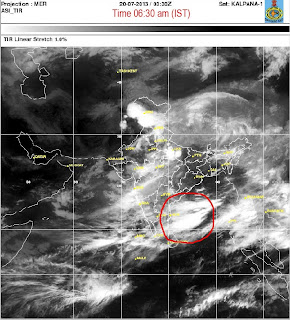 As a part of  "STH stormwatch", we maintain a watch on the weather activity in the Bay of Bengal with a view to provide advance information and timely warning. The report below is a part  of this endeavour:-

We will post updates on the LOPAR if necessary.

Posted by SaveTheHills at 9:51 AM No comments:

Posted by SaveTheHills at 1:14 PM No comments: 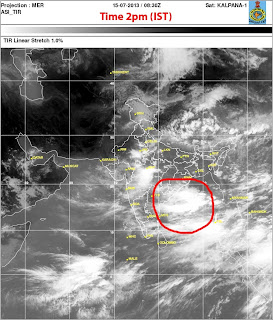 How are low pressure systems classified in India? What are the differences between low, depression and cyclone? 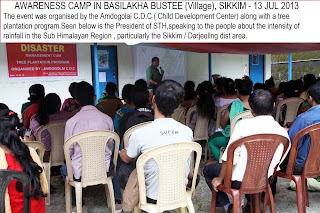 On 13 July 2013, STH was in Basilakha Bustee ( N 27°15.508’ /  E 088°34.969’) East Sikkim, as part of the Disaster Management / Tree Plantation program organised by Amdogolai C.D.C ( Child Development Center). There were 70-75 people in attendance mostly women and children.Among the many topics related to landslides and extreme weather that were covered, STH spoke about the importance of community capacity building both as a preventive as well as a responsive measure against landslides.

We'd like to thank Amdogolai C.D.C and the members of Compassion International, who were involved in organizing this camp.

STH Stormwatch (11 July2013) : Reporting a low pressure build up in the Bay of Bengal 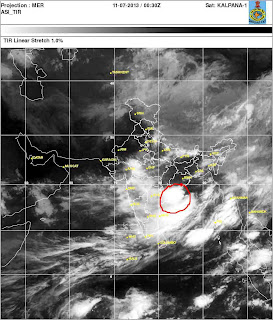 A low pressure area has formed in the Bay of Bengal and is now over Odisha and the adjoining North West Bay of Bengal, we will be tracking its movements over the next few days and updates will be posted on this blog.

Watching the weather on the WWW

Having keenly followed the weather and reported the development and tracks of storms using broadband internet for the past 3yrs (as a part of "STH StormWatch" series, see here, here and here), I can confidently say that today, broadband internet places at the hands of ordinary people an extraordinary tool for checking and understanding  what was earlier the exclusive realm of scientists and meteorologists.
Placed below is how I, an untrained layman (with the help of a few very experienced meteorologist friends) watch the weather (in my region) :-
a) I start off here which is a new page for Severe Weather warnings which IMetD has inserted into their home page. 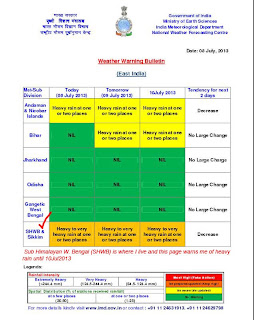 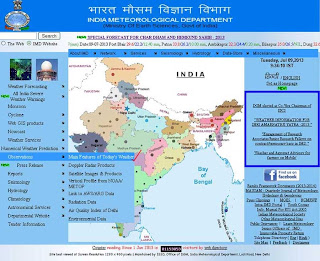 The 'Main Features' page (below) you gives a wealth of information, inclusive of ACTUAL weather which has occurred all over the country and a meteorological analysis. The latter is important because it tells you what is brewing up and where. The page further will give you more details on weather warnings. 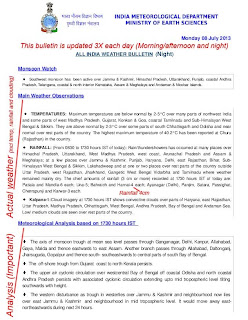 c) Next I usually visit the satellite imagery and check out the Kalpana-1 INFRA RED (IR) channel (below)
IR images provide information about the temperature of the clouds. The coldest (therefore the tallest) clouds such as cirrus, cumulonimbus appear white whereas the warmer clouds will appear grey. Though the images are updated every 30mins, processing them takes a little time so the latest images that you see are around 1hr old. 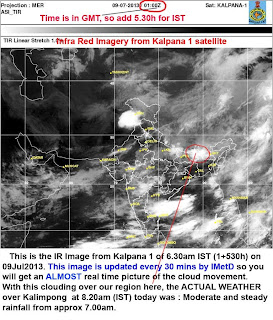 and the visible channel 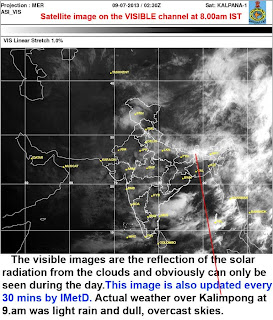 d) You can get a fairly good idea on the movement of clouds for the past 3hrs from the GIF animations by IMetD here
e) For more specific information on the weather in your region you may like to go to the IMetD Regional Meteorological Centre websites:- 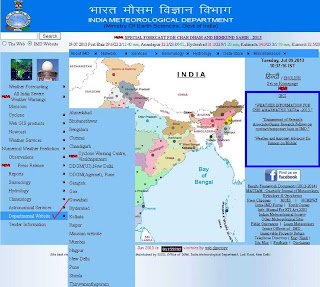 Posted by SaveTheHills at 11:24 AM No comments:

Technical advice from Dr B Nandi
About Dr B Nandi :


Dr Nandi is a renowned Aviation Meteorologist in India. He has served Indian Air Force for 33 years in various capacities. He is the founder Director of Centre for Numerical Weather Prediction for Air Force. He is an Alumni of Ramakrishna Mission Vidyapith, Purulia; Ramakrishna Mission College Narendrapur, Kolkata University; Burdwan University and Centre for Atmospheric Science, IIT, Delhi. Currently engaged as Chief  Meteorologist for Indigo Airlines for last 7 years. 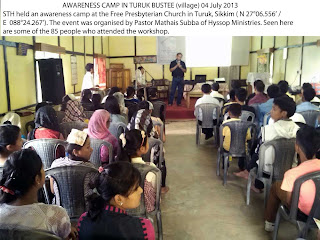 STH has always made an effort to educate the youth, about the hazards of landslides and extreme weather events in the Sub Himalayan region.
On 04 July 2013 STH conducted an awareness camp in Turuk bustee (village) in South Sikkim. There were around 85 people in attendance, most of them  students. STH talked about the recent events in Uttarakhand, cloud burst and a real danger of such an event occuring in this region along with the prevention and mitigation aspects of landslides.
Special thanks to Pastor Mathais Subba of Hyssop Ministries for organizing this camp.

Rohan Rao,
Kalimpong,
Dist Darjeeling.
rohan.rao1313@gmail.com
Posted by SaveTheHills at 11:03 AM No comments: 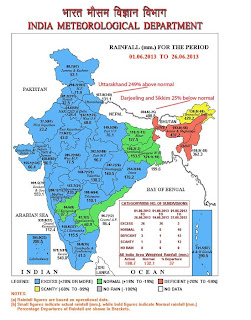 Jun2013 was extraordinary; it was the month of the "Himalayan Tsunami" when torrential rains over Uttarakhand and Himachal Pradesh in mid Jun2013, caused unprecedented loss of life and a disaster which the country is still trying to grapple with.
Whilst the rest of the country reported normal to excess rainfall, the north eastern states of India went deficient in rainfall. STH reported the formation of two low pressure areas in the Bay of Bengal, the first weather system eventually reaching the Uttarakhand region in mid Jun2013.
Also, two interesting facts observed in Jun2013 were :-