Winds of change : No winter rains 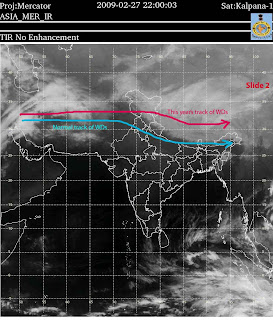 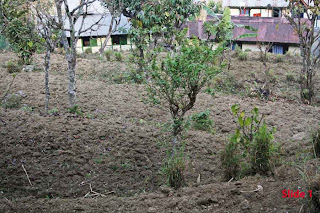 Normally the winter rains (and the occasional snowfall) in this part of the world is caused by a series of WESTERN DISTURBANCES (WDs). These are extra tropical storms which pick up their moisture from the Mediterranean sea and Atlantic ocean and move thru Iran, Pakistan, northwest India and finally over our region during winters giving widespread rain and snow .
This year however, the WDs have followed a route which is much to the north of their normal tracks ( see slide 1) , also they have exhausted much of their moisture in the northwest resulting in no rain or snow this entire winter (Nov-Feb) in sub-Himalayan West Bengal and Sikkim.
In comparison, last year we did have much more rain and even snow during this period.
As a result, fields are ploughed fields are dry (slide 2 shows fields in Bhalukhop, Kalimpong) and the crop of maize which feeds so many in this part of the world may be adversely affected. The other fallout of this drought maybe acute shortage in potable water supply in the urban areas and forest fires.

Talking about the weather, here is a useful link regarding rainfall and weather prediction


praful rao
Posted by SaveTheHills at 6:34 AM No comments:

FEBRUARY
a) Participate in the NDMA / 33Corps Workshop on “Medical Aspects of Disaster Management” on 05Feb2009. (Completed - see earlier blog for report and photos of the Workshop)
b) Translate and arrange to print publicity pamphlets in Nepali (with the help/resources of NDRF)
c) Membership drive amongst individuals as well as institutions and NGOs.

MARCH
a) Arrange for Landslide Hazard Awareness Workshops with Schools / Colleges / Social Clubs/ Rural areas inclusive of Cinchona and Tea plantations. This will be an ongoing program through the year.
b) Arrange a meeting with all Social Organizations of Kalimpong to chart out a community response to the problems of oncoming monsoons (such as drain cleaning)
c) Set up Landslide Alerting Posts all over the district with the help of NGOs and SHGs and check on means of communication for reporting landslides.

APRIL
a) Work on a video on landslide hazards as well as STH activities. This will involve filming at landslide zones, interviews with affected persons etc and will be an ongoing project.
b) Rotary Club of Kalimpong Power Point presentation competition on “SaveTheHills” and Landslide Hazards in the Darjeeling/Sikkim Himalayas.


JUNE
a) 05JUN WORLD ENVIRONMENT DAY celebration ( Organize a rally, street play and program in the Community Town Hall)
b) Keep a track of and report on landslides all over the district/ Sikkim
c) Visit landslide zones where possible, assess loss/cause.

JULY
a) Seven day tree plantation program in concert with the Forest Dept taking students to different landslide area of Kalimpong
b) Keep a track of and report on landslides all over the district/ Sikkim
c) Visit landslide zones where possible assess loss/cause.

AUGUST
a) Keep a track of and report on landslides all over the district/ Sikkim
b) Visit landslide zones where possible assess loss/cause.

a) Survey, classify and update data of landslides in all the affected areas of the District (and Sikkim if possible)
b) STH Foundation Day Celebration (inviting guests from Darjeeling ,Sikkim , Siliguri , Kurseong )

OCTOBER
a) Continue the awareness programs
b) Photo Exhibition on “Landslide Hazards in Darjeeling /Sikkim Himalayas” at Darjeeling, Kalimpong, Gangtok.

NOVEMBER
a) Fund Raising program for STH in Kalimpong/Darjeeling etc featuring a prominent musician.
b) Continue the awareness programs

DECEMBER
a) Continue the awareness programs
b) Assess the impact of awareness / landslide prevention measures taken thru the year.

My thanks to Ms Aachal Tamang, Exec Member STH for doing much of the work in preparation of the above plan. 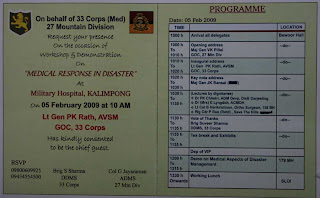 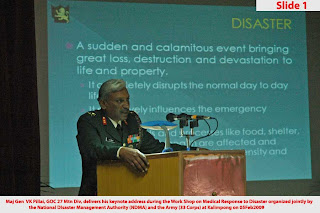 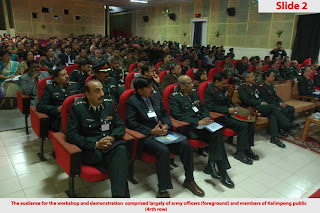 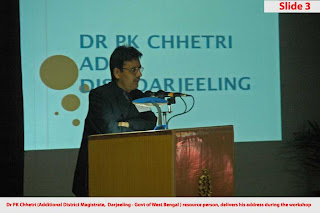 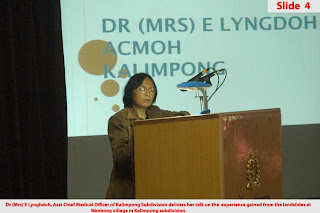 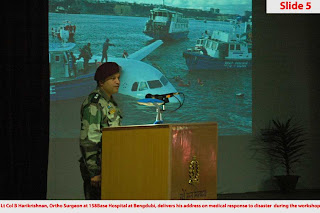 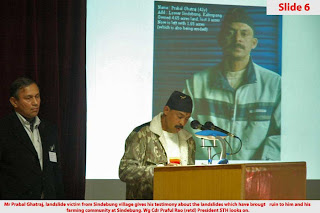 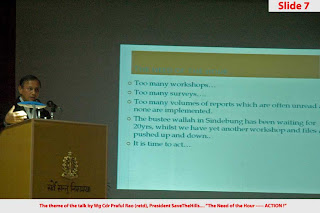 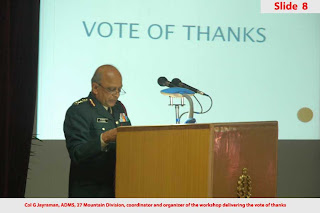 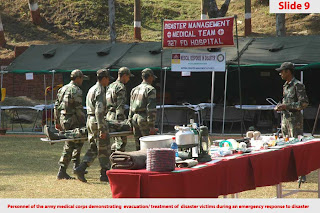 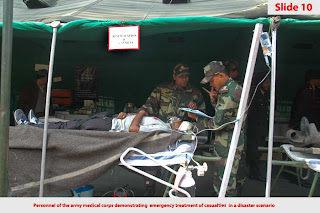 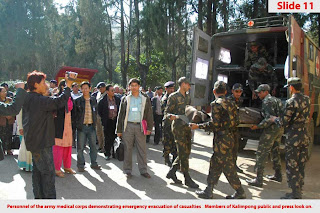 The NDMA together with the Army Authorities (33Corps) held a one day Awareness Workshop on "Medical Response to Disaster" at Kalimpong on 05Feb2009.
The NDMA was represented by officers and personnel of 106 National Disaster Response Force (NDRF) Battalion at Kolkata. The Chief Guest was the GOC 27 Mtn Division, Gen VK Pillai and the resource persons were included STH besides govt and medical officers.
The workshop was followed by elaborate and detailed demonstration by army medical corp personnel on casualty evacation, setting up of emergency treatment and information centres and a line-up of equipment used by the NDRF in disasters.
STH was involved with the workshop in liaising with army and civilians and inviting NGOs, providing data/photographs of landslide disasters and of course delivering a lecture :The Need of the Hour".
Approx 50 people of Kalimpong attended the workshop.


My thanks to the NDMA and Army for holding this workshop at Kalimpong and allowing STH to participate in it. My thanks also to all members of STH who helped in planning and executing our role in the workshop


praful rao
Posted by SaveTheHills at 5:34 AM No comments: