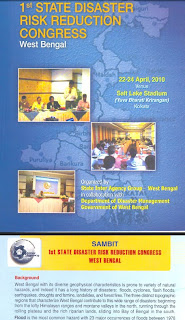 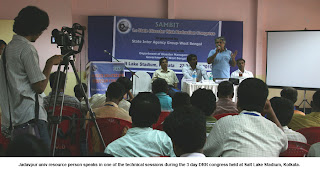 Approx 14 delegates (representing the NGOs Anugyalaya / DLR Prerna / Friends of Trees and SaveTheHills)  from the hill subdivisions of Darjeeling district attended the 3 day Disaster Risk Reduction (DRR) Congress at Salt Lake Stadium between the 22 -24Apr 2010.
To all of us who attended, the initiative from the State IAG and Dept of Disaster Management, Govt of W Bengal was decidedly a non-event because :-
a) The entire proceedings for the 3 days were conducted in Bengali, a language which not many amongst us were familiar with.
b) More importantly, the focus of the disaster risk reduction congress remained entirely on effects of  cyclone AILA in the plains, floods and Tsunamis. As such landslides, sadly remained " a Silent Disaster".
The serious landslide problem in the Darjeeling hills was barely mentioned in all the technical sessions except when specific questions were directed at the panelists.
This disaster form (landslides) are without a doubt the most serious environmental hazard which directly or indirectly impacts the lives of almost all the people living in the Darjeeling Himalayas; as such, I wonder why it escaped more serious consideration and was almost entirely sidelined during the 1st West Bengal State Disaster Risk Reduction Congress.

Praful Rao
Posted by SaveTheHills at 2:26 PM No comments: 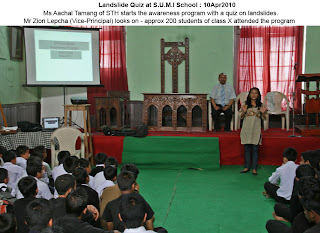 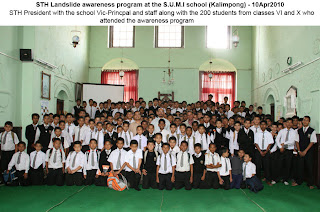 S.U.M.I (Scottish University Mission Institutions) school is possibly the biggest and oldest school in Kalimpong with more than 3000students. On the invitation of the Principal, Mr NR PRadhan, STH conducted a 90min landslide awareness program with students from Class X and VI. The program included a quiz by STH Member Ms Aachal Tamang.

My thanks to the Principal and staff off SUMI for this opportunity.
Praful Rao
Posted by SaveTheHills at 11:35 AM 1 comment: 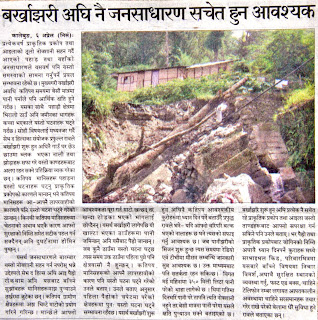 Himalaya Darpan is the largest local daily with a circulation of over 40,000 in this region (a large part of which is affected by landslides).
They have agreed to allow STH to publish articles regularly regarding the landslide hazards - this is our second article on landslides (published on the 06Apr2010) and is about preparedness for the monsoons and the landslides which will invariably occur then.
Praful Rao
Posted by SaveTheHills at 12:50 PM No comments:

3 siblings killed in Cachar landslide
- Death in the mountains of the northeast OUR BUREAU
Silchar, April 2:
In the battle between Man and the mountains of the Northeast, the former continues to lose, sadly without seeming to learn a lesson, no matter what the toll in terms of human lives.
The latest disaster has come from Assam where three children aged 7, 5 and 2 were crushed to death after the side of a mountain slid onto their house in Cachar, wiping it out. Their parents, Deepak and Supriti Roy, who survived the catastrophe were seriously injured.
A torrential downpour — some 26 inches on the rain gauge — over the past few days loosened the earth leading to the tragedy at the reserved forest village of Paglanala under Dholai block in the state’s Cachar district.
In the reckless destruction of mountains — be it in the name of “development” or the creation of more “living space” — there have been instances of entire convoys of passenger traffic being stranded in the mountains of the region because of landslides.
Solutions to the problem, meanwhile, have been few and far between. Apart from widening roads and building guard walls — and these aren’t always enough to hold back a mountain quite literally on the move — Meghalaya, for example, has built tunnels through mountains, including a 120-metre construction through the Sonapur range in the state’s Jaintia Hills.
In Guwahati, the — Gateway to the Northeast — landslides have claimed scores of lives over the past years. “Most hills around the city are unfit for human habitation as they are made up of fragile, loose alluvial soil,” says Jiten Malakar, divisional officer of the state’s soil conservation department.
That, though, has not prevented Guwahati’s steadily growing population from occupying the city’s hills — legally or illegally, with laws such as the Assam Hill Land and Ecological Sites (Protection and Management) Act, a piece of legislation meant to prevent the destruction of hills leading just about nowhere in this mad scramble for land. Worst of all, the Northeast’s real rains are yet to set in. The disaster in Silchar, for one, was caused by pre-monsoon showers that have lashed the region over the last few days. The worst then could be yet to come.


Praful Rao
Posted by SaveTheHills at 9:14 AM No comments: 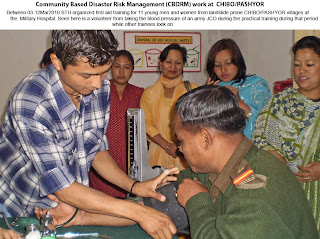 For the benefit of those who do not follow the blog regularly - CHIBO/PASHYOR are villages on the western face of the Kalimpong ridge and they have had a long history of treacherous landslides. With the monsoons just around the corner SaveTheHills (STH) is working on a CBDRM program there on a trial basis.
In so doing we organized basic first aid training to 11 young men and women of the villages at the Military Hospital in Kalimpong in the first week of Mar2010.
We also hope to provide them with some first aid equipment before the monsoons start.

STH would like to thank the Army Authorities and officers / personnel of the Military Hospital who went out of their way to help us with the training.

Praful Rao
Posted by SaveTheHills at 3:57 PM No comments: