This morning while checking this blog, I came across many posts where the image especially of storm systems had been removed and replaced with

I cannot understand the mindset of prankster or hacker who gets thrills out of destroying data which would help us understand the weather systems in this region better and thereby saves lives. Unfortunately I may not be able to replace the data/image since I normally delete old files after updating the blog.
While I will have to change this practice, may I appeal to whoever disfigured the STH blog to desist from further such action?

Praful Rao,
Kalimpong,
Dist Darjeeling
Posted by SaveTheHills at 11:02 AM No comments: 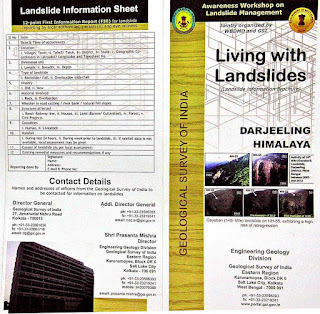 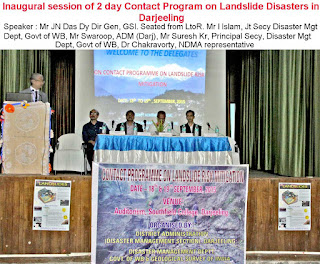 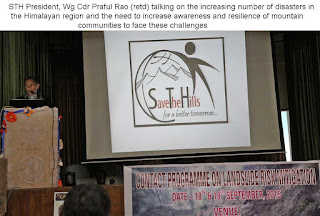 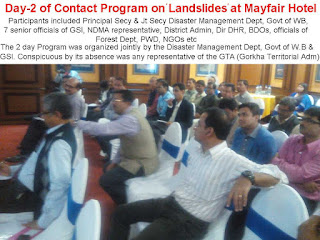 1. The meeting was Chaired by Shri Suresh Kr (IAS), Principal Secretary, Disaster Management Dept, Govt of W.B, with Shri Ikhlaque Islam, WBCS (Exe), Jt Secretary and Nodal Officer Disaster Management Dept, Govt of W Bengal also present.
Geological Survey of India (GSI) which is the nodal body looking after landslides in India  and was co-hosting the event was represented by :-
i. Shri M Raju, Addnl Dir General and HoD Eastern Region, Kolkata
ii. Shri JN Das, Dy Director, GSI
iii. Shri BM Gairola, Dir NHIM Div, New Delhi
iv. Shri M Ghatak, Superintendant Geologist
v. Shri S Ghosh, Superintendant Geologist, GHRM, Central HQ, Kolkata
vi. Shri Jaiswal, Geologist, GHRM, Central HQ, Kolkata
vii. Shri T Ghosal, Geologist, ER Kolkata
2. Significant takeaways from the meeting were :-
a. GSI have confirmed that a geo-technical investigation of the Chibo- Pashyor landslides would be undertaken. This will give us hard scientific data on the state of the landslides in that area and pave the means to technical intervention and funding to stabilize the slopes.
b. Rainfall threshold based forecasting/prediction of landslides which had been tested successfully in the Nilgiris would also be brought into Darjeeling district on a trial basis.
c. Disaster Management Dept, Govt of W B would look into making documentary films in Nepali for landslide awareness.
d. Disaster Management Dept, Govt of W B, would take up the unserviceability of  large number of AWS stations with IMD. AWS station in Darjeeling, Gangtok and Siliguri are defective for more than a year now.
3. It was a pity there was no representation of officials from the GTA during the meeting since the Darjeeling/ Sikkim Himalaya are amongst the most landslide prone areas in the country and interacting with the experts at Darjeeling on 18/19Sep2015 would have been a tremendous opportunity for them to be exposed to new technology and techniques to combat a disaster form which is now the most serious environment challenge for us living in these mountains.
Further more since so many high ranking GSI officials were available for 2 days in Darjeeling, we could have asked them for technical investigation of the many major landslides in the Darjeeling hills

Posted by SaveTheHills at 6:04 PM No comments:

STH Stormwatch : The storm in Bay of Bengal Intensifies into a Well Marked Low 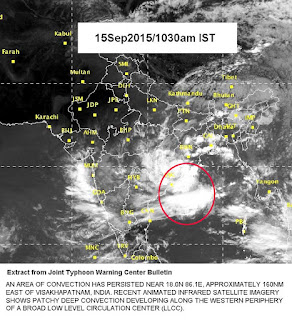 "The well marked low pressure area over south Odisha and neighbourhood has concentrated into a Depression at 1130 hours IST of today, the 16th September over south Odisha & neighbourhood and now lay centred at 1430 hours IST of today near Lat.20.3°N and Long. 83.0°E, about 40kms northwest of Titlagarh and about 160kms southeast of
Raipur. It is likely to move west ­northwestwards during next 24 hours."

STH stormwatch : Reporting a low pressure area in the Bay of Bengal (12Sep2015) 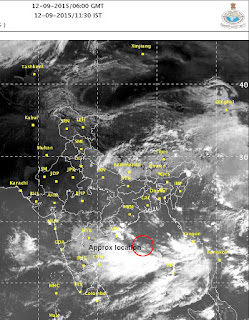 Posted by SaveTheHills at 8:45 AM No comments: 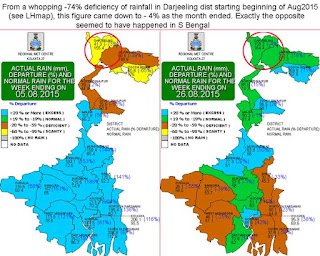 Gangtok, Darjeeling and Kalimpong had deficient rainfall in Aug2015 whereas Kurseong and Mangan (N Sikkim) had an excess in rainfall.
Excess rainfall seen in S Bengal was the aftermath of Cyclone Komen which formed in the Bay, end of July2015. No other significant system affecting our region formed in the Bay of Bengal in Aug2015.
There were no major landslides or fatal landslides in Darjeeling and Sikkim.

Praful Rao,
Kalimpong,
Darjeeling district
Posted by SaveTheHills at 8:00 AM No comments: