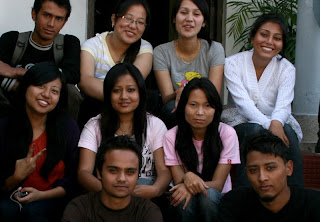 Nine final year students of the Dept of Mass Communication, St Joseph's College, North Point - Darjeeling (which included students from Darjeeling, Sikkim and Bhutan) were here in  Kalimpong on 27Oct2009 - they are working on producing a documentary film on "Landslide Hazards in the Darjeeling district". Besides doing an exhaustive interview on the subject, they discussed the causes and effects of landslides with STH. The documentary is being being made for the  Montage College Film festival at the college on 28Nov2009.

Praful Rao
Posted by SaveTheHills at 8:49 AM No comments: 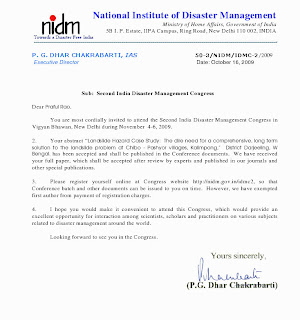 STH (with a lot of help from the affected people of Chibo and Pashyor) had in the first week of Sep2009 submitted a paper to the 2nd India Disaster Management Congress (IDMC) about the vulnerability of  Chibo - Pashyor to landslides and the urgent necessity for a long term solution. The same has been accepted formally as a part of the documentation for the Congress.
As such STH has officially been  invited to the Congress and I will certainly attend the IDMC2.

Posted by SaveTheHills at 4:50 PM No comments: 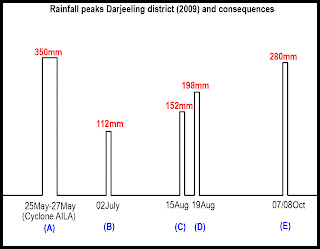 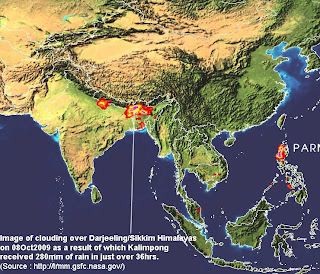 Technically the SW monsoon completes it withdrawal from this part of the world on 12Oct and judging by the fine weather we have been experiencing for the past few days, I just hope it is so.
Placed above is an approximation of the rainfall pattern in 2009, the consequences of which are given in brief below :-


(A) 25-27May2009.
We experienced a direct hit by Cyclone AILA which dumped as much as 350mm of rain in 3 consecutive days. The western parts of Darjeeling district (Kurseong and Darjeeling) suffered the most damage - 27 persons died in landslides and roads, tea gardens and infrastructure sustained immense damage.
(B) 02July2009.
Kalimpong received 112mm of rain in a single day. Even though there was only one death, Nimbong and Pabrintar in Kalimpong subdivision were severely affected by landslides. It took more than a week to restore the Nimbong-Bagrakote road which is the life line for people living in the area.
(C) 15Aug2009.
A single day's rainfall amounted to 152mm. 6 persons died in Kurseong and there was significant damage to houses and infrastructure.
(D) 19Aug2009.
Coming within 4 days of the above rainfall, the 198mm of rain on 19Aug caused immense damage. Chibo/Pashyor remain isolated from Kalimpong as on date (14Oct) with roads and bridges having been washed away by the deluge.
(E) 07/08Oct2009.
36 hrs of rainfall brought in 280mm of rain. However, there was no report of any major damage or death, most probably due to the fact that Sep2009 was largely dry and the moisture content in the earth had decreased significantly.

Posted by SaveTheHills at 6:45 AM No comments: 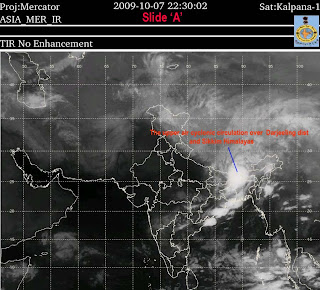 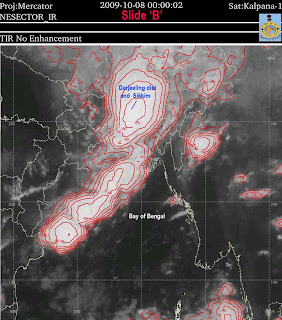 It rained for just about 36hrs and unlike Cyclone AILA, there was no well formed system which was "trackable", nevertheless it dumped close to 300mm of rain (equal to more than double the monthly rainfall) in barely one and half days.
For all of us living here in the affected areas , the 36hrs were as many hrs in hell!
Slide 'A' shows the satellite picture from http://imd.gov.in on 07Oct09 at 3.30am IST
Slide 'B' shows a close up of the same area on 08Oct09 at 5.30am IST

The fact that there were no major landslides this time is perhaps because
a) In Sept09 we had almost 2 weeks of sunshine and as such the moisture content in the soil had reduced considerably.
b) The rainfall lasted for 36hrs only.

Why landslides are an unknown disaster form.. 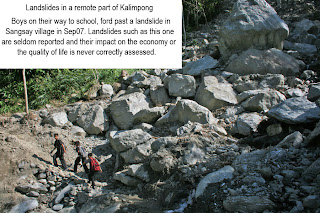