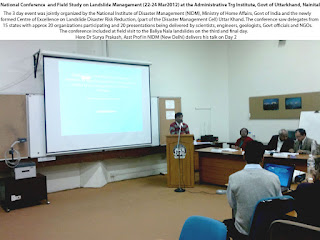 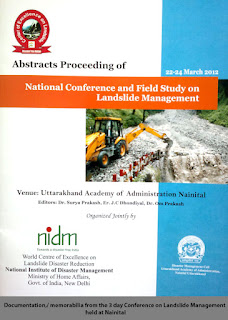 SaveTheHills (STH) wishes to thank NIDM (New Delhi) and Disaster Management Cell, Uttarkhand Academy of Administration (Nainital) for organizing the conference and giving an opportunity to interact and share our experiences and knowledge so that we can manage our landslide problems better.

Praful Rao
Posted by SaveTheHills at 1:26 PM No comments: 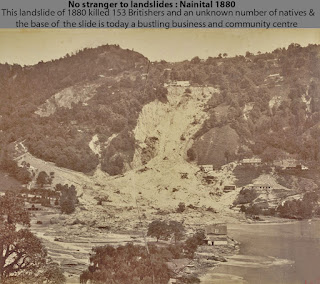 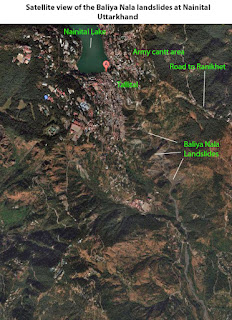 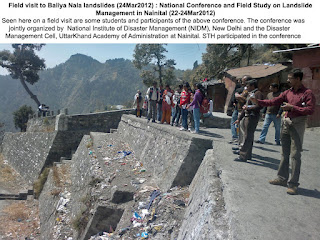 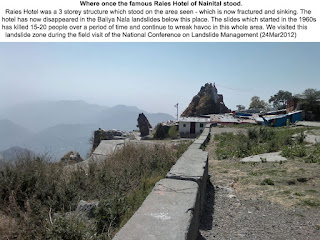 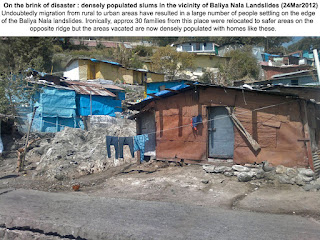 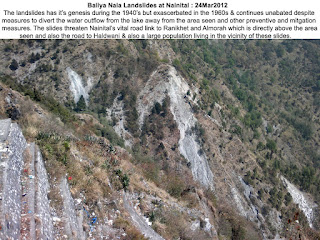 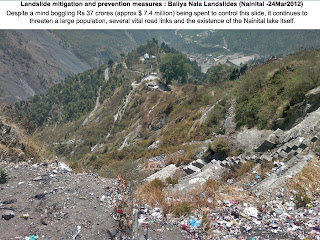 The field trip in the National Conference on Landslides took us to the Baliya Nala landslides which is the scourge of Nainital and which is not too different from the many landslides which are around Kalimpong. Without being over simplistic, the landslides seems to be caused by a natural drain which receives water from the outflow of the Nainital Lake. As with the many jhoras which causes severe erosion and landslides both on the eastern and western faces of Kalimpong, this natural drain now is unable to handle volumes and velocities of water which flows in it  - without causing the scouring and the huge landslide problem.
The difference is perhaps that whereas Uttarkhand has spent approx Rs 37 crores (approx $7.3 million) in elaborate preventive and mitigation measures we in Kalimpong have not even executed one major work to control our problems.

Yet despite this huge expense and all the technical expertise from IIT Roorkee and others, this landslide continues to wreak havoc in Nainital.
Praful Rao
Posted by SaveTheHills at 1:20 PM No comments: 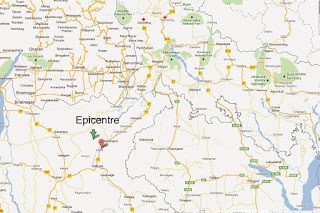 Posted by SaveTheHills at 8:33 AM No comments:

Working at the grassroots level 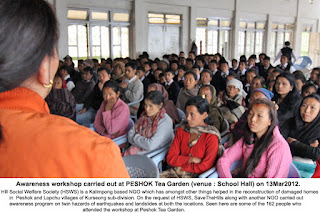 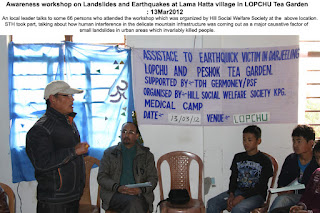 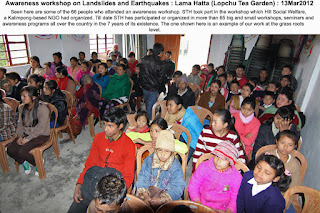 Peshoke and Lopchu are places on the opposite ridge of Kalimpong which are better known for the fine tea that their tea gardens produce rather than the landslide problem in the area.
Thanks to a Hill Social Welfare Society, a vibrant NGO which is working in the region, STH could conduct two Landslide and Earthquake Awareness workshops at the places named above on 13Mar2012; some 220 people all from surrounding tea gardens attended the meetings and I am glad to say that there were many students amongst them.

Praful Rao
Posted by SaveTheHills at 7:28 PM No comments: 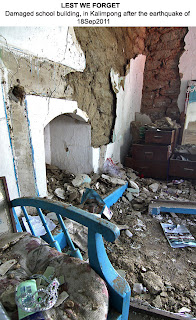 Having luckily survived a 6.9R magnitude earthquake barely 6 months ago we seem to have completely forgotten that we live in a hazardous area where we are constantly exposed to the twin disaster forms of landslides and earthquakes.
As such, having thrown all caution to the winds, we will be charging headlong into the south -westerly monsoons having wasted the precious dry period when much could have been done in terms of putting in place an early warning system and  shoring up our defenses and strengthening disaster preparedness.
What a pity that we never seem to learn....
______________________________________________
Activities of STH in 2011


a)     In Feb2011, STH did make an effort to work with communities living in hazardous areas and for this we had earmarked DUMSI PAKHA which is a village of approx 300 houses just below Rockvale Academy. However, even after a number of visits there including taking visiting Prof and team from TISS, Mumbai, we came to believe that they were not interested.
b)     We also had a similar experience while working with the community in DHOBI DHARA where we even started a 10 day first aid training program at the Field Hospital in the army – which had to be abandoned due to lack of interest.


a)     STH completed two documentary films on landslides in 2011. The first one was made with DECU of ISRO (Ahmedabad) and is a 20min film in English meant for primary schools – copies of the DVD have been sent to 50 schools in Darjeeling dist and Sikkim.
b)     The second film was made with the Magic Lantern Foundation and is about the impact of climate change on communities affected by landslides.
This film has been aired on local TV.


4.      Visits by Delegates
A number of teams and delegates interacted with STH during the course of the year. These were :-
a) Field visit by delegates from Dept of Geography, Univ of North Bengal to landslide areas in and around Kalimpong -19Mar2011.
b) Field visit to Balasun/Paglajhora landslides with Professors from Presidency Univ - 10May2011
c) Internship of 2 students from TISS (Mumbai)  and Vishwa Bharati (Shantiniketan) with STH – May2011 & Nov2011.
d)  Field visit by Profs Balamurugan & Samrat Sinha of JTCDM - TISS (Mumbai)  to earthquake devastated and landslide areas – Oct2011.
e) Field visit by Dr Łukasz Wiejaczka, hydrologist and geomorphologist  and colleague Polish Academy of Sciences, Kracow, Poland -18Nov2011

a) Vetiver Grass
Vetiver grass is being used the world over as a cheap and effective way of checking soil erosion. As such STH successfully imported 10,000 saplings of vetiver grass from Kerala and distributed 15 sacks of the same to NGOs in the district. The survival rate is almost 60% and we have decided to go in for a much larger plantation in the landslide prone areas of Kalimpong sub-division this year.

c) STH "Storm Watch" (2011)
STH tracked the development, formation and movement of each low pressure area, depression and cyclonic storm from various meteorological websites and posted warnings almost on a real time basis on this blog as a part of effort  to alert communities about heavy rainfall in this region.
Praful Rao

Posted by SaveTheHills at 12:59 PM No comments: