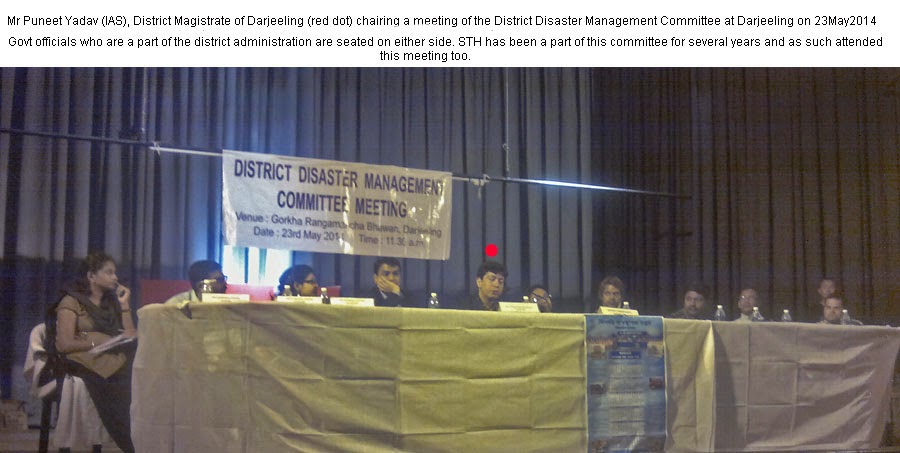 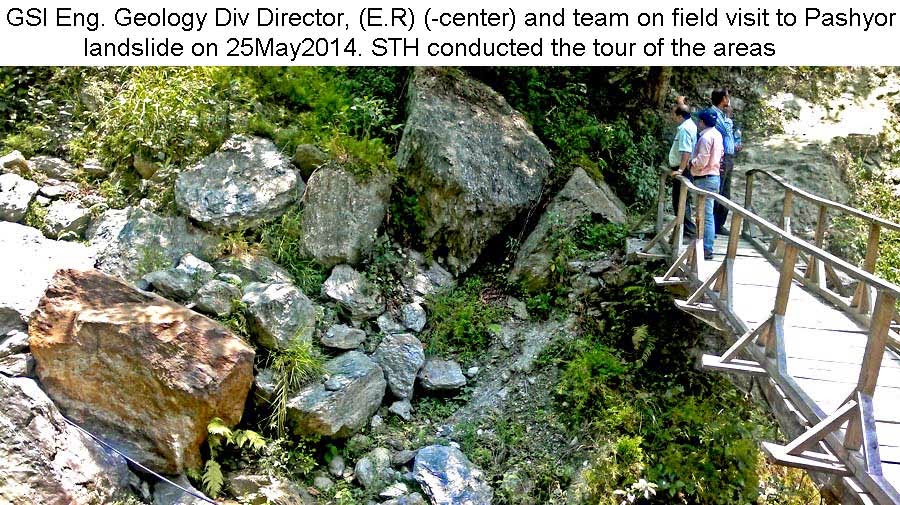 Being an NGO member of the Darjeeling District Disaster Management Committee, we attended the meeting in the Gorkha Rangamancha (auditorium), Darjeeling on 23 May2014 - the meeting was Chaired by Mr Puneet Yadav (IAS), DM Darjeeling (Top slide).
On 25May2014, we took the Director, GSI Engineering Geology, Easter Region (Kolkata) to Chibo village and followed by that a field visit to the landslide area at Pashyor (Bottom slide).

Posted by SaveTheHills at 2:53 PM No comments:

The depression which was predicted to move northwestwards towards Bangladesh both by the JTWC and IMetD yesterday, seemed to have a mind of its own today and curved southwest wards and quite suddenly weakened into a well marked low and as such has become insignificant.
It's amazing that all the science and technology in the world cannot quite  predict or understand the behavior of these storms as they wax and wane in the ocean.

Posted by SaveTheHills at 10:09 PM No comments:

For further details go here
Whereas on 21May2014, the depression was seen moving east towards MyanMar, on 22May2014, the projected track shows the storm moving northwest towards Bangladesh and could well affect W. Bengal as well.
This forecast seems in keeping with the meteorological analysis by IMetD (22May2014) in its ALL INDIA WEATHER BULLETIN (Night), which states :-
'The depression over east central Bay of Bengal moved north-northwestwards and lay centered at 1730 hours IST of today, near lat.17.5°N and long. 92.0E, about 650 km north-northwest of Port Blair. It would move north-northwestwards during next 48 hours'

Posted by SaveTheHills at 5:32 PM No comments:

The TRMM website is one of the many that STH uses while keeping a track of the storms that brew up in the Bay of Bengal.
Placed below is an image juxtaposing the latest image of the storm taken from IMD with that on the TRMM website. 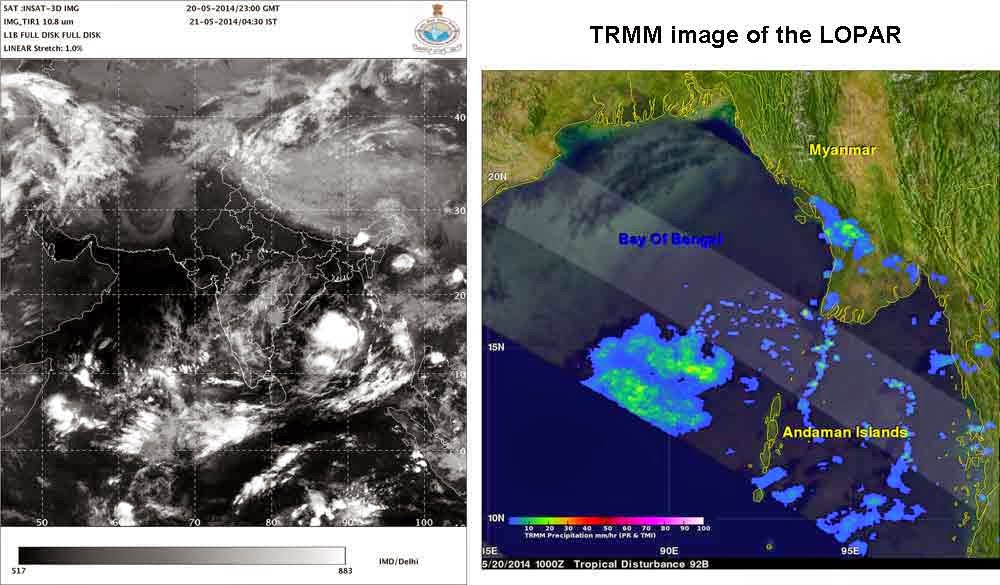 * Update at 0830h IST, 21May2014
The low pressure area over eastcentral Bay of Bengal & neighbourhood concentrated into depression at 0830 hours IST of today, the 21st May 2014 near latitude 15.5°N and longitude 90.5°E over eastcentral Bay of Bengal, about 490 km north­northwest of Port Blair.
It may intensify further into a deep depression during next 24 hours. It would move near northwards for some time andthen north­northeastwards towards Myanmar & adjoining Bangladesh coast during next 48 h 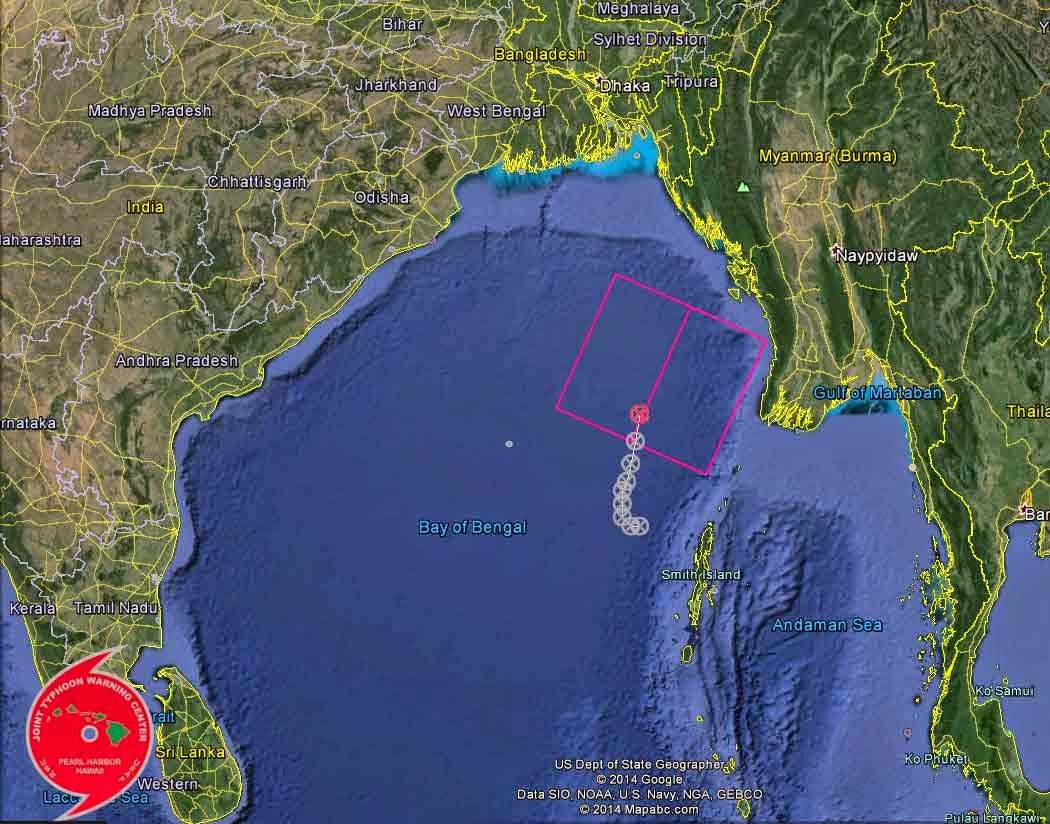 Praful Rao,
Kalimpong,
Dist Darjeeling
Posted by SaveTheHills at 7:30 AM No comments:

Deficient rainfall, monsoon progress and formation of the first LOPAR of 2014 in the Bay of Bengal 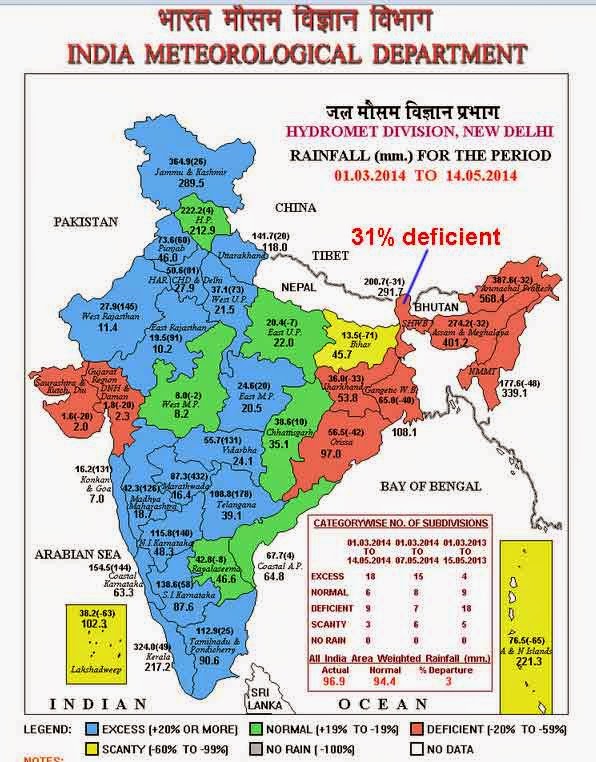 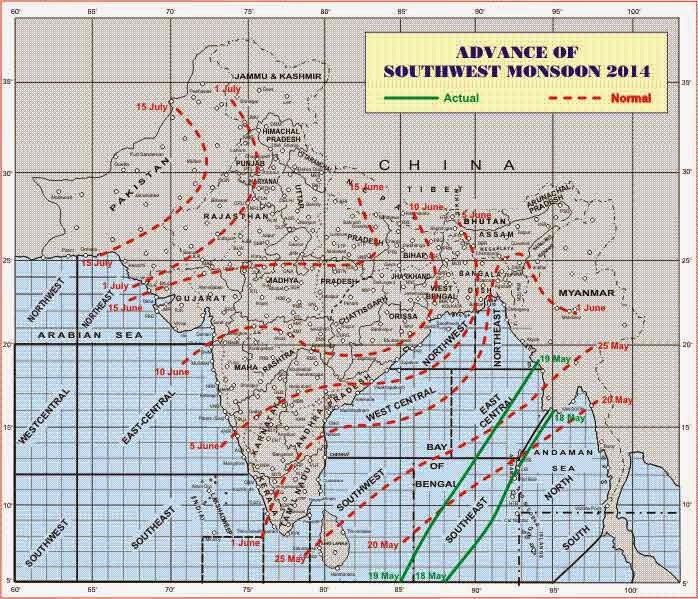 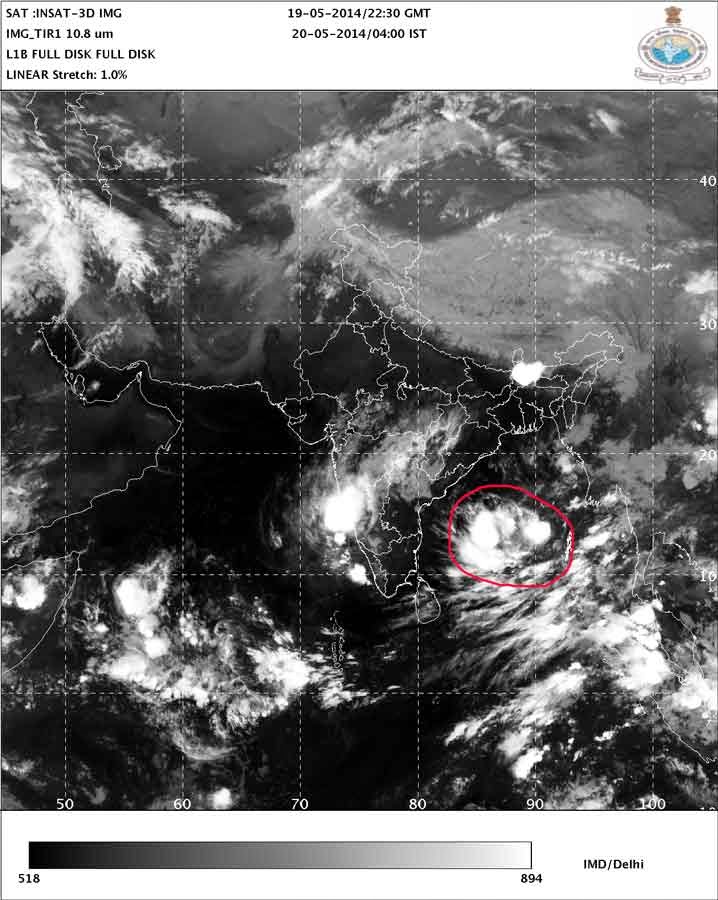 The Darjeeling - Sikkim Himalaya is running anywhere from 56% deficient during the winter of 2013 to 31% deficient in Mar-May2014 (see top map) in rainfall. This has resulted in the maize crop being stunted and dwarfed in many parts of rural Kalimpong, a severe adverse effect in the tea industry and  a critical shortage in potable water in all the urban centres of the district.
In this background, the formation of 'a low pressure area over east central Bay of Bengal and its neighbourhood, an associated cyclonic circulation extending upto mean troposphere' (see above) maybe a welcome sign of rain in the days ahead.

Praful Rao
Kalimpong,
Dist Darjeeling
Posted by SaveTheHills at 6:09 AM No comments: 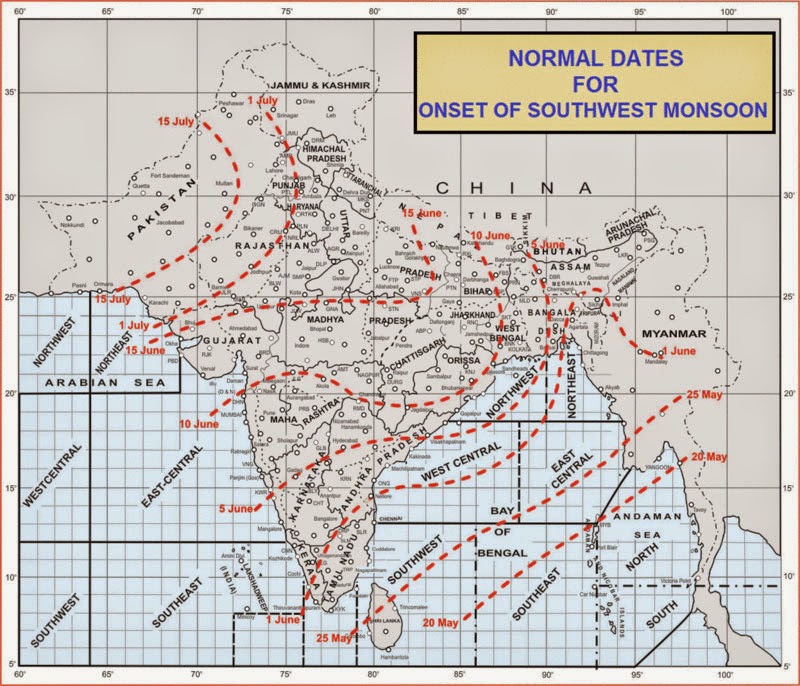 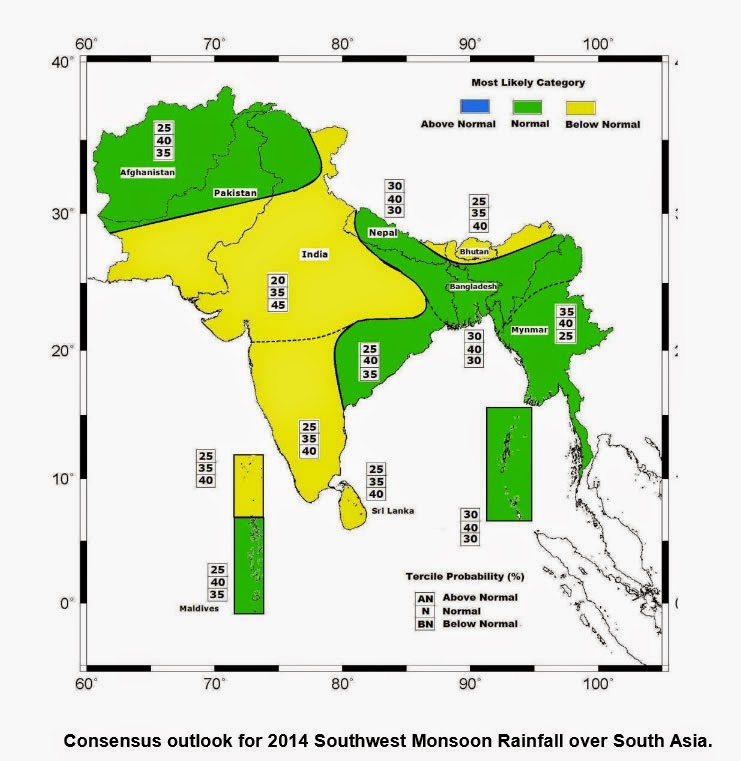 Consensus Statement of South Asian Climate Forum (SASCOF -5), Pune, India (14 - 23April2014)
Summary
Below normal to normal rainfall is most likely during the 2014 summer
monsoon season (June - September) over south Asia as a whole. Below normal
rainfall is likely over broad areas of western, central and southwestern parts of South
Asia and some areas in the northeastern most parts of the region. Normal rainfall is
likely over broad areas of northwestern and eastern parts and some island areas
in the southernmost parts of the region.
You can download the full statement in PDF format here

Praful Rao,
Kalimpong,
Dist Darjeeling
Posted by SaveTheHills at 11:38 AM No comments: 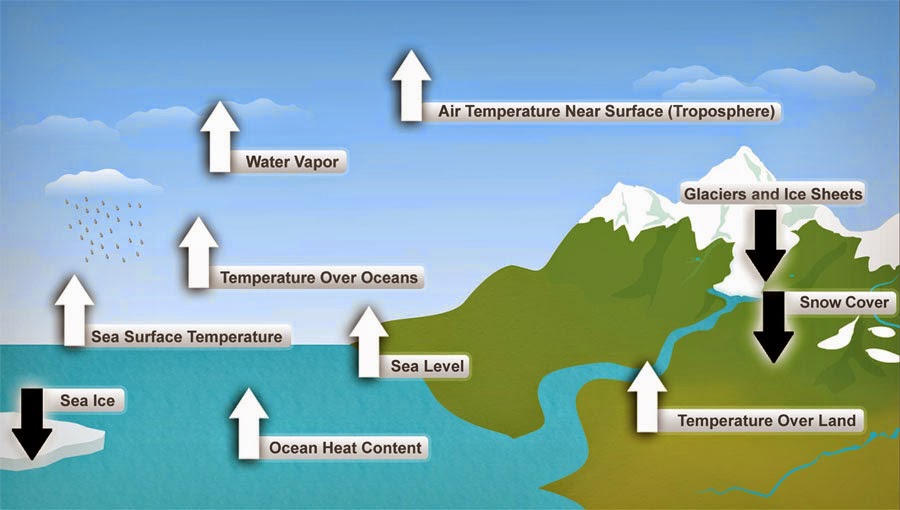 Posted by SaveTheHills at 5:56 AM No comments:

An Article on the 'Ab Barek' Landslide in Afghanistan

An interesting article on why and how the landslide that has claimed more than 2000 lives happened and what may happen if the situation isn't contained is below :


The Badakshan landslide: A foreseeable tragedy?

A recent rainfall-triggered landslide in Ab Barek (sometimes referred to as Abe Bareek) in the Badakhshan Province of Afghanistan is suspected of taking the lives of up to 2100 villagers. As with so many remote events, details are scarce, although a number of images and videos have appeared on social media websites over the last days. Some images, as that below, indicate the landslide may have crossed a river valley and formed a landslide dam blocking the river running through the town. In a region that has recently experienced heavy rainfall, the formation, and breach of such a dam could have severe consequences to any communities downstream. 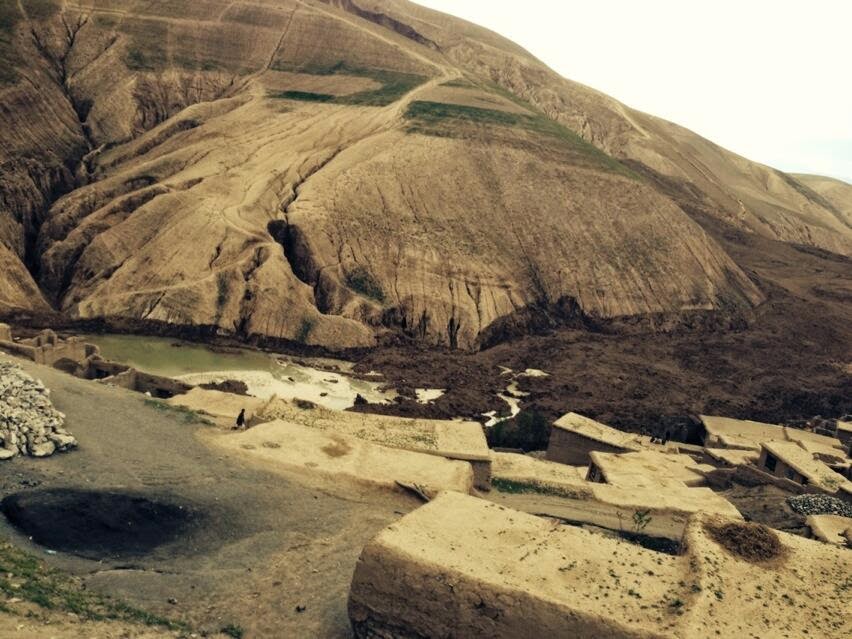 Posted by SaveTheHills at 5:47 AM No comments:


Praful Rao,
Kalimpong,
Dist Darjeeling
Posted by SaveTheHills at 7:21 AM No comments: 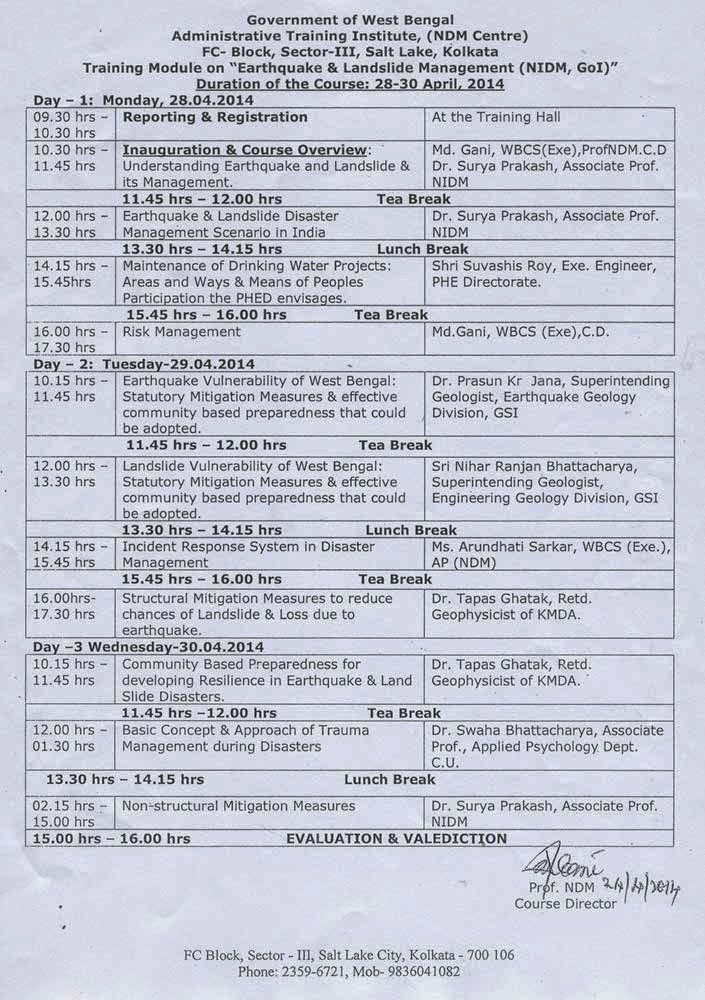 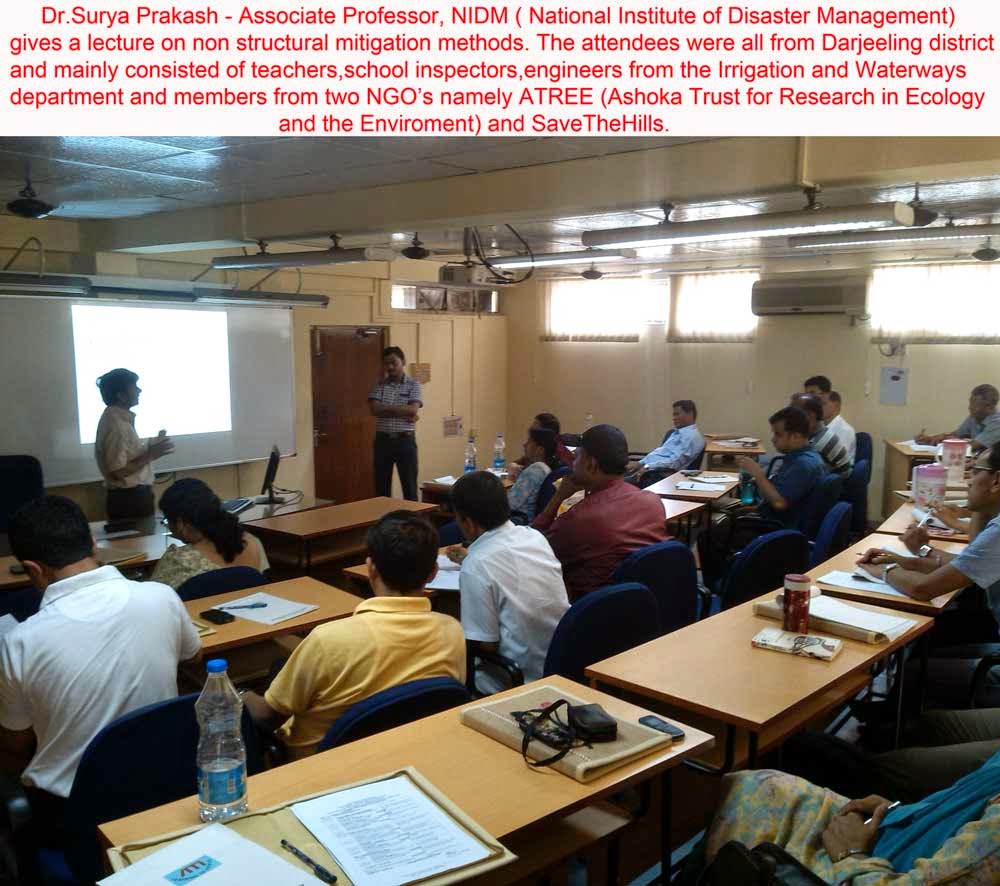 28-30Apr2014 - The Administrative Training Institute (ATI), in collaboration with the National Institute of Disaster Management (NIDM) organized a training workshop on 'Landslide and Earthquake' Management in Kolkata. The training covered many important aspects such as structural and non-structural mitigation measures, the Incident Response System, community based preparedness to build resilience, landslide and earthquake vulnerability in West Bengal etc.

Posted by SaveTheHills at 5:12 PM No comments: 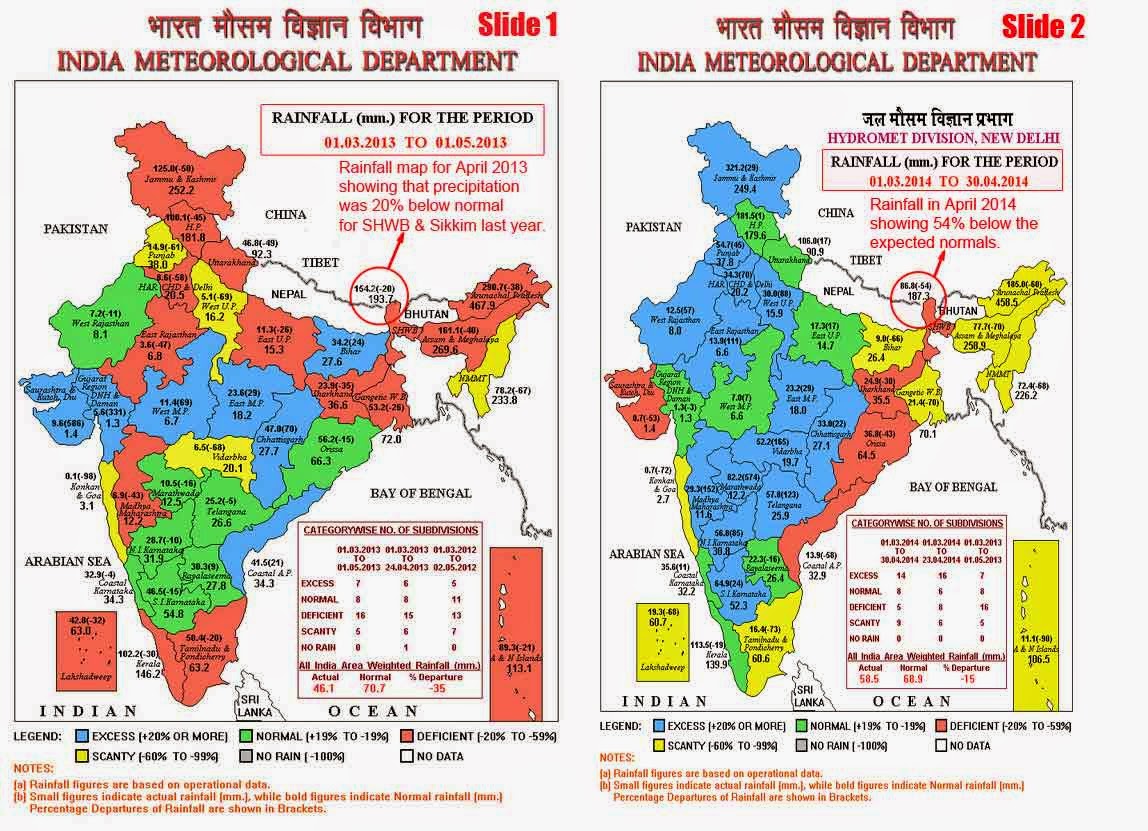 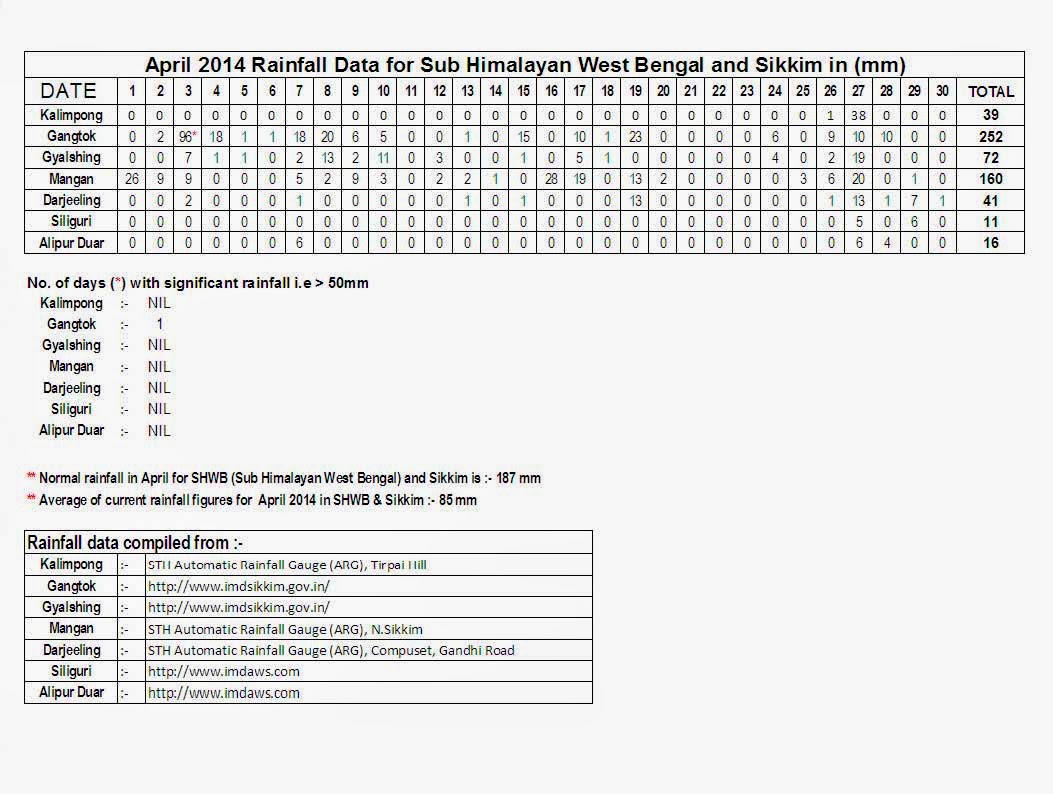 The precursor to the monsoon season in 2014 has been even bleaker than in 2013 with the   Pre-Monsoon season (March-May according to IMetD) bringing hardly any rainfall to Sub Himalayan West Bengal and Sikkim. In April 2014, Kalimpong saw only two rainy days and though Sikkim seems to be getting more rainfall than Darjeeling district, the region as a whole has received less rainfall than last year for the same period (shown in slide 1&2). Let us hope that the 'rain gods' are kinder in the months that follow.