STH Stormwatch : Another low pressure area forms in the Bay of Bengal (30Jun2016) 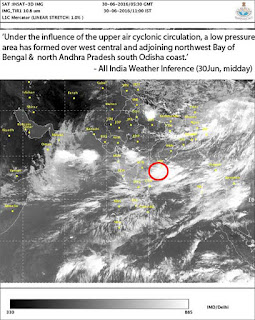 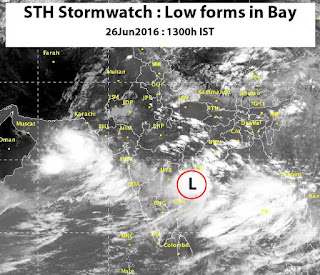 We will keep a track of the storm and post updates as required.

Posted by SaveTheHills at 2:25 PM No comments:

Project SHAMROCC, comprising a team of distinguished scientists from the UK and India was in Kalimpong briefly in the first week of Mar2016, with a view to carry out a feasibility study for landslide prediction in the Darjeeling Himalaya, which is one of the most landslide prone areas in the world.
One of the events that was organized during their visit here was a workshop where Dr David Petley, one of the world's leading scientists on landslide hazards gave a talk 'on 'Managing Landslides - Hazards and Risks in the Himalayas'.
We have finally managed to upload the entire workshop on Youtube in two parts for all to view and learn from.


My deep thanks to the SHAMROCC team for their visit here and to Mr Naren Tamang of KTv, Kalimpong for uploading the video.

Praful Rao,
Kalimpong,
Dist Darjeeling
Posted by SaveTheHills at 9:30 AM No comments:

All about the SW Monsoons : Project BoBBLE launches off tomorrow

“The Indian monsoon is notoriously hard to predict. It is a very complicated weather system and the processes are not understood or recorded in science. "
- Prof Prof Adrian Matthews (Univ of East Anglia, UK)
Project BoBBle
The project called the Bay of Bengal Boundary LayerExperiment (BoBBLE) aims for a better understanding of the actual physical processes so as to ultimately create more accurate forecasts.
Researchers from University of East Anglia and Reading (UK) and the National Oceanography Centre (NOC) in Southampton along with scientists from four Indian institutions: the Centre for Atmospheric and Oceanic Sciences (CAOS) Bangalore, the Indian National Centre for Climate Information Services (INCOIS) Hyderabad , the National Centre for Medium Range Weather Forecasting (NCMRWF) NOIDA NCR and the National Institute of Ocean Technology (NIOT) Chennai, will embark on June 24 from Chennai on the Indian research vessel Oceanographic Research Vessel ORV Sindhu Sadhana.
Simultaneously other researchers from India and the University of Reading will fly out in a British research aircraft to make observations in the atmosphere. The team will spend a month at sea – with data from the 250-mile stretch of international water beamed back to using mobile phone signals daily. Scientists from the University of East Anglia (UEA) will release underwater robots to monitor how ocean conditions influence monsoon rainfall. Researchers will use this data to create computer models of the ocean to determine how it affects weather systems and rainfall over India. - full article 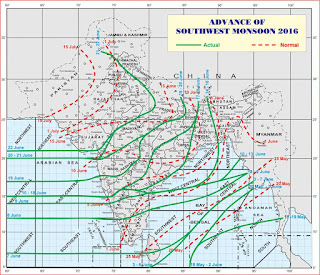 Posted by SaveTheHills at 4:31 PM No comments: 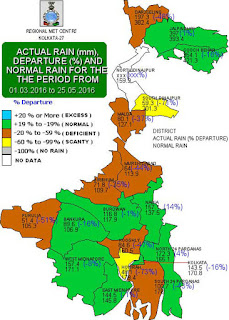 Much of Darjeeling district went deficient in rainfall in May2016 whereas in Sikkim, there was abundant rain.
Richu bridge in North Sikkim was washed away following the intense rains of 15/16May2016 and that proved to be an unexpected bonanza for hoteliers in Kalimpong with tourists changing their destination from North Sikkim to spend some time in Kalimpong.
Kalimpong was almost bone dry and desperate people started drilling the mountain aquifers to pump out water. 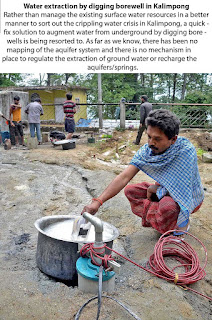 A study done in 2012 by a local NGO, revealed no shortage of surface water for Kalimpong town; the real reason for this shortfall only being mismanagement and corruption.
As such there is no requirement for drilling bore wells in Kalimpong in the first place.
Therefore, STH went on local TV and appealed through the press not to tamper with ground water without a thorough study of our aquifer system and also without plans to recharge drying springs.
So far this appeal has only fallen on deaf ears with the GTA announcing that it plans to dig another 10 bore wells in Darjeeling district.

Mechanical extraction of water by drilling in Kalimpong : The need for caution (Interview in KalimpongTv)

Water security in the Himalayas will in the future be a humongous problem with documented information that springs which are our life line for water in the mountains, drying up at an alarming rate. Even a cursory check carried out by STH in and around Kalimpong revealed that many perennial springs had become seasonal and many seasonal ones had dried up. The reasons are many, one of them being the changing rainfall patterns which now gives us 5 months of abundant rainfall followed by almost 7 months of drought.
This in turn has led to a severe water crisis in the town with some desperate people turning to drilling for water within the Kalimpong town municipal limits.
STH along with a group of people had voiced our concerns on the drilling because:-
a. The extraction was being done without a proper study of the aquifer system and unregulated extraction of water at the crest could adversely affect downstream communities.
b. There was no mechanism in place to regulate the number of bore wells or the amount of water that could be extracted.
c. There was no word on recharging the aquifer system/springs or the need to protect recharge areas.
d. There was no word on testing the quality of water.

Kalimpong TV asked me for an interview regarding extraction of ground water in Kalimpong. The same is place below (sorry, the interview is mostly in Nepali)

Praful Rao,
Kalimpong,
Dist Darjeeling
Posted by SaveTheHills at 10:21 AM No comments: 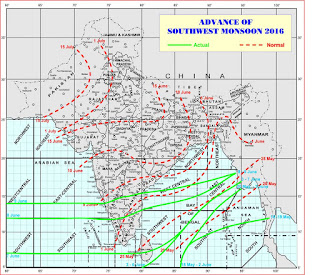 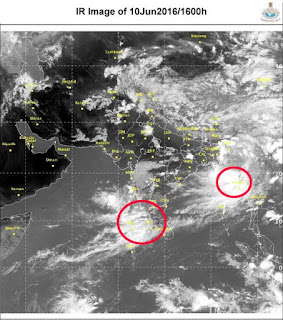 STH activities : Sensitizing children on Environmental Issues of the Himalayas 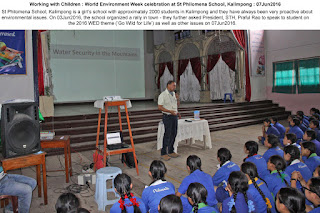 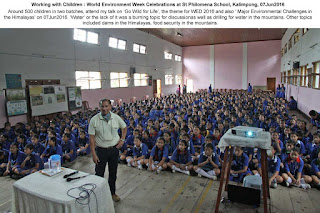 My deep thanks to St Philomena School Kalimpong and also to Dr  PT Bhutia, CCF, North Bengal Forest Division for sending us many beautiful posters on the wild life of India.

Posted by SaveTheHills at 5:23 PM No comments: