Rainfall data of Jun2019 for the Darjeeling-Sikkim Himalaya 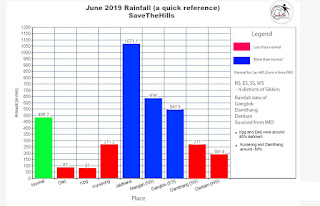 Rainfall data of Gangtok, Damthang and Dentam are from IMD 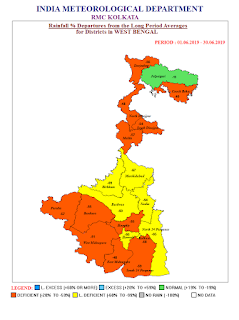 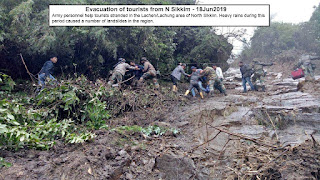 ABOUT JUNE 2019 RAINFALL FROM IMD

Posted by SaveTheHills at 5:49 PM No comments:

Orange orchards of Darjeeling & Kalimpong - from the Best Growing Zones into Graveyards.

On 22Nov2015, I made a trip to Sittong in Kurseong subdivison (Darjeeling dist) to check out some landslides in that area. It was a day long trip and I visited some prominent landslides while enroute to the little hamlet and spent much of my day investigating the huge landslide in Sittong 3.
I also talked with some locals about the landslide situation there but while talking about their livelihoods they said oranges which were their main source of livelihood in Sittong were almost gone.
Of course, everyone here knows that oranges from Sittong once flooded the markets in Kalimpong and those along National Highway10 at Lohapul.
What the people I talked to feared most, was that along with oranges, their livelihoods for generations would also disappear.
They were correct.
Oranges as a cash crop in the Darjeeling-Kalimpong region is history today.
This news was brought out in the Telegraph on 25Nov2015 (see below) and I know that it was shown to a very high level official from the Govt of W Bengal who was visiting Kalimpong that day. 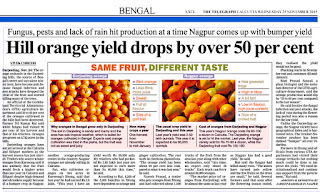 Therefore, I was surprised to read yesterday, another article by Vivek on 'Orange crisis in the hills' (below). 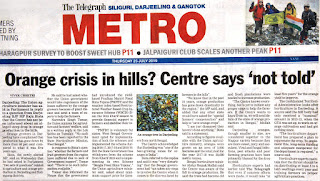 So 4 years later, while politicians still bicker and blame each other, the Darjeeling hills - once one of the 'best orange growing zones' in the country, is today a graveyard for orange orchards with the livelihoods of thousands destroyed and it is certainly NOT due to aging trees and orchards alone.
I visited some orchards in Bhalukhop bustee (village), Kalimpong some years ago and talked to a farmer who's crop was similarly blighted - he showed me the reason for the orange trees dying en masse (see below) despite being new plantations: 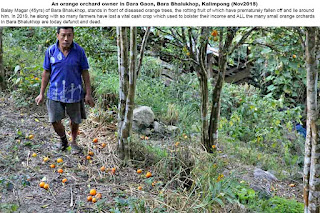 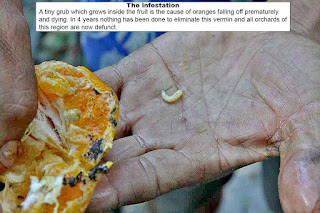 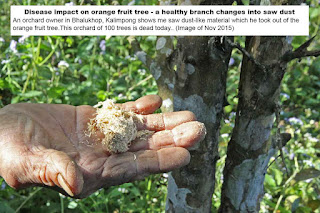 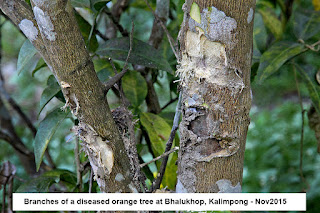 WIth many of our cash crops, ginger, oranges, now large cardamom succumbing to disease and pests, and the looming water crisis in the mountains where our natural springs are drying up, one wonders about food security in the Darjeeling -Sikkim Himalaya and future of agriculture as viable livelihood option for the rural youth of the region.

Extreme event in the Darjeeling Himalayas as it unfurls :14Jul2019 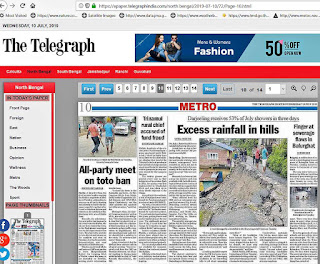 We, in the Darjeeling Himalayas have over the past 9 days been witnessing an extraordinary weather event.
a. A low pressure area between the states of UP and Bihar resulted in a sudden spurt in monsoon activity in the region with rainfall suddenly jumping from - 56% in the beginning of Jul2019 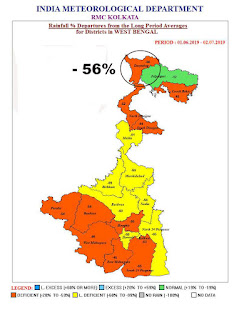 to where we received more than our monthly average of rain for July (average 615.8mm) in the spate of just 10 days. 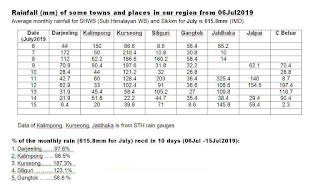 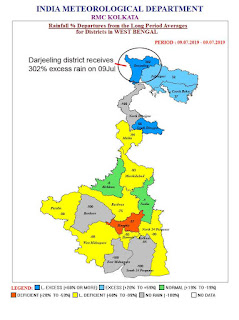 b. This extreme weather event is still ongoing (see below)

and IMetD has clamped on a RED weather warning for this region for an unprecedented number of days in a row.
In keeping with the enhanced rain, we have had a quantum increase in landslide activity in the Darjeeling Himalayas:
-    We have had 2 fatalities due to landslides directly and another 4 when a vehicle carrying tourists plunged into the Teesta river on National Highway (NH)10. NH31A also had landslides in July2019.
-   NH10, an arterial road connecting Sikkim to the rest of the country has been blocked for the past 2 days and so have virtually all the roads out of Kalimpong towards Sikkim and the Dooars plains. NH55 which links Darjeeling to Siliguri is cut off at places and the services of the DHR have been suspended.
-   There have been a spate of landslides all over the districts of Kalimpong and Darjeeling. We will be giving more details on the landslides in this blog.

Praful Rao,
Kalimpong district,
Darjeeling-Sikkim Himalaya
Posted by SaveTheHills at 4:55 AM No comments:

Landslide in front of Anugayalaya/Divyavani, near Loreto Convent, Darjeeling
At around 4:30 am on Tuesday Morning i.e., 9th July, a landslide occurred in front of Anugayalaya/Divyavani near Loreto Convent (to be precise below Bishop’s House, NH10).The debris covered the entire road in front of the building which caused the drain water to enter inside the building (fig. 1.0).
The landslide took place at the adjoining road (i.e., a road to Anugayalaya’s Office) on NH10 (Lebong Hill Cart Road).There were few signs of crack visible on the road in fig 1.2. The slide is measured to be around 13 metres in height and 6 metres in width. However, to consider the width of the whole areas, is 30 metres (which is also the length of Pony road). The rainfall data as measured by IMD over the past 24 hours is 112 mm.
The staffs(Church and Anugayalaya) witnessed the incident in the morning. Around 4 am in the morning, they noticed drain water streaming down the slope and slowly leading to landslide. The slide blocked the road in front of Anugayalaya’s office, which is also a road leading to Loreto Convent.
The local residents and the staffs cleared and made a walkable passage for the school children to walk down to their school. They covered the landslide (fig 1.7). Till 9 am, no local authorities neither the relief materials were available.
The reason behind this incident was drain blockage. The drain system was completely blocked as shown in fig. 1.4, 1.5 and 1.6. So, the drain water along with road/rain water started flowing/pouring down the slope causing landslide.
The authorities started to visit the site after 9:30 am. The Irrigation department came to take measurements then followed by the traffic officials. Assistant Engineer Mr Anup Das, Central Planning, GTA visited the site as well.
The Darjeeling municipality engineer department, Mr Prashant Rai (Head of the engineer department) visited the site. He informed his department workers to come and start cleaning up the debris. The workers started cleaning the road as seen in fig 1.8, 1.9 and 2.0. The clearance took till 1:30 pm in the afternoon. 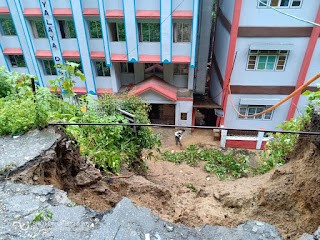 Posted by SaveTheHills at 4:10 PM No comments: 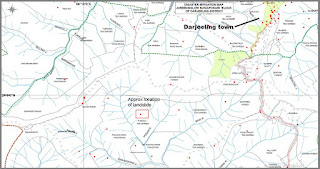 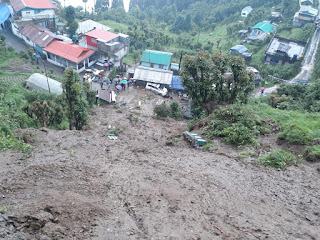 At around 1:30 am on Monday night (08Jul2019), a landslide occurred at Chatai Dhura (Forest Village) below Pubung Fatak, near Sukhia, Darjeeling. The house of Lopchan family was buried under the landslide.
Two people, Kumar Lopchan (60 years) and his wife Bal Kumari Lopchan (55 years), died. They were buried under the debris. After being extricated by the Police and Fire brigade and they were rushed out to Sadar Hospital, Darjeeling where the doctor declared them dead.
The landside and mud flow/slide occurred from State Highway 12 which connecting Sukhia to Simana. The landslide is more than 100 metres and 30-40 metres wide. As per IMD, the rainfall of Darjeeling is 172 mm in the past 24 hours (07Jul2019).
The probable cause behind this incident is as per BDMO Sukhia block, could be due to state highway extension. While its construction the mud or soil was left opened at the side. The drainage wasn’t clear out for the monsoon water flow. As to look into, the village was built on steep slope.
The problem the people faced was due to being under no network coverage area. So, the information to the Gram Panchayat Staff was late. The BDMO received the information around 6 am in the morning.

Amit Gurung,
STH
Darjeeling
Posted by SaveTheHills at 7:37 AM No comments: 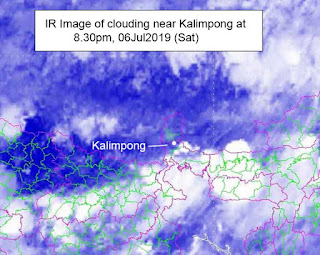 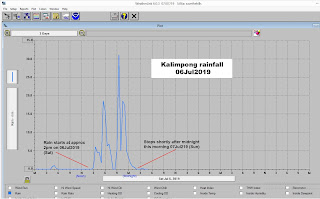 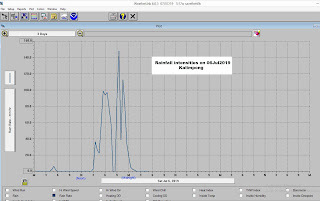 It started raining at around 1.00pm in Kalimpong yesterday and what started as a gentle shower intensified late evening (see intensity graph) and night and ended up dumping over 150mm of rain in parched Kalimpong over a 12hr period.
In this region rainfall peaks in July with a monthly average of 615.8 mm. 157mm of rain of (06Jul) therefore accounts for 25% of the monthly rain and is equal to approx 7 days rain all coming down withing a 12hr span.
The aftermath is shown in a photo essay below: 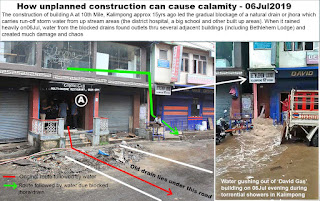 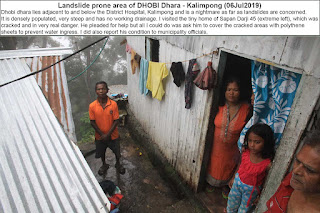 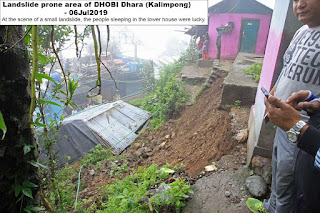 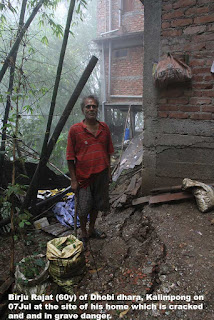 Praful Rao
Kalimpong district
Darjeeling-Sikkim Himalaya
Posted by SaveTheHills at 11:52 AM No comments:

Images of the first major landslide in the vicinity of Kalimpong : 05Jul2019/0800hrs 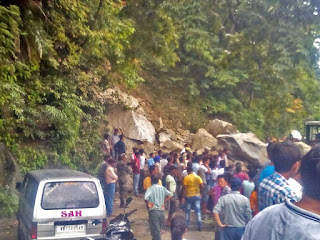 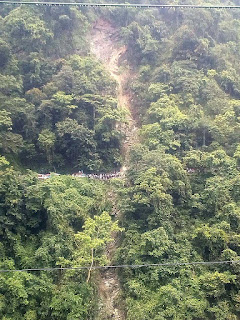 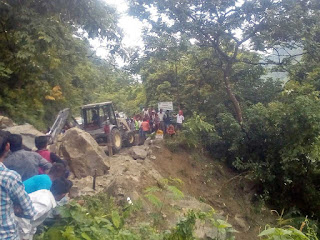 Took place on National Highway 31 between Coronation Bridge and Monpong in W Bengal. Time, approx 0800hrs this morning. I do not have rainfall data of the place but we had 22.6mm of rain between 0500-0630hrs in Kalimpong which 20km away (aerial dist).
No casualties.