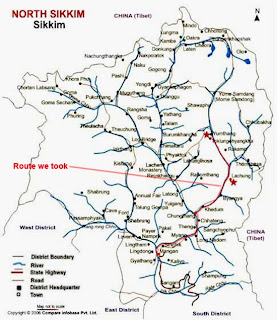 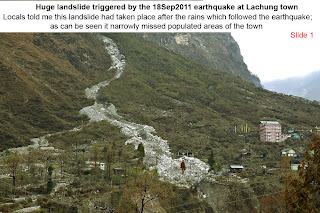 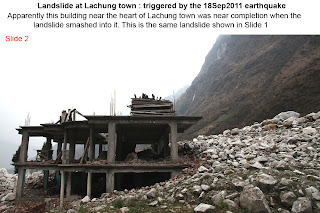 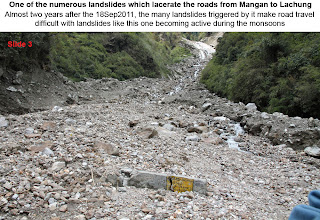 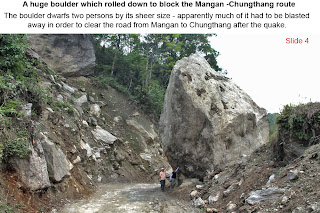 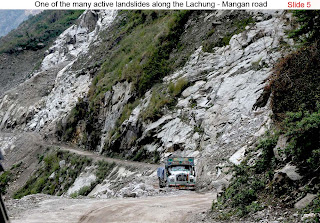 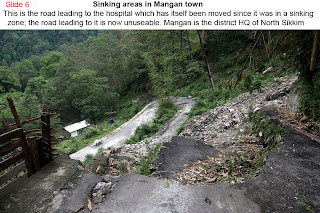 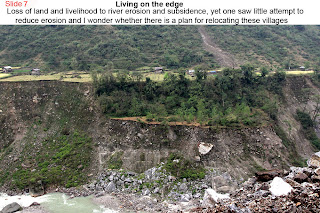 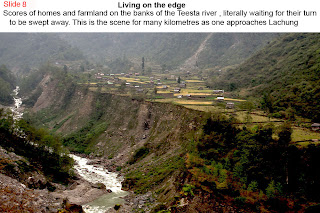 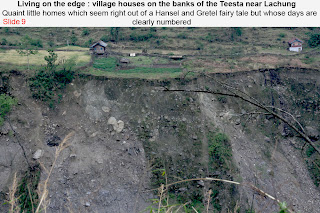 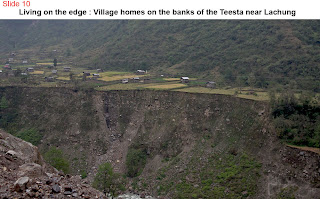 On 18Sep2011 (Sunday), at approx 18.10h IST a 6.8R earthquake rattled much of Sikkim and Darjeeling district.
That very few died was an absolute miracle especially since the quake struck us at the end of the monsoons (when the ground was saturated with water) and that it had rained the whole of Sunday morning.
I have covered the impact of the quake elsewhere in the blog but never had the opportunity to visit North Sikkim where it was epi-centred.
In mid-April 2013, I had visited Mangan (dist headquarters of N Sikkim) and journeyed upto Lachung. While being awed by the amazing beauty of the place, I was totally shocked to see the scale of devastation wrought by the quake even after almost two years.
The condition of the road from Mangan upto Lachung is appalling with landslides lacerating it at numerous places and magnificent forests of rhododendrons have been decimated by slides enroute to Yumthang ; little wonder then that any heavy spell of rainfall reactivates these slides.
Placed above is a photo essay from my recent visit to this wonderland.


Praful Rao,
Kalimpong
Posted by SaveTheHills at 7:25 PM No comments: 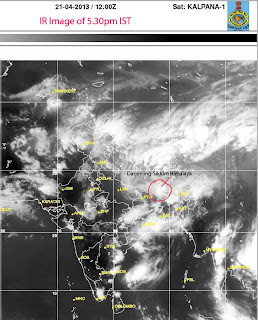 Amongst other weather systems, an upper air cyclonic circulation over east Uttar Pradesh and neighbourhood and the east west trough from the cyclonic circulation has resulted intense weather activity over the Darjeeling-Sikkim Himalaya and which dumped 38mm of rain in a 2hr period last evening at Kalimpong.
Temperatures all over the country have plummeted with the IMetD reporting
"They are below normal by 4-9°C over many parts over of Jammu & Kashmir, Himachal Pradesh, Uttarakhand, Punjab, Rajasthan, Gujarat, west Madhya Pradesh ,Vidarbha, Odisha and Gangetic West Bengal and by 10-17°C over many parts of east Utter Pradesh, east Madhya Pradesh, Chhattisgarh, Bihar and Jharkhand."
So with the temperature hovering around 13°C (in Kalimpong) and 8°C (in Darjeeling) at 0700h this morning,  we are still wrapped up in woollens in what otherwise should be almost peak summers!

Posted by SaveTheHills at 8:15 AM No comments: 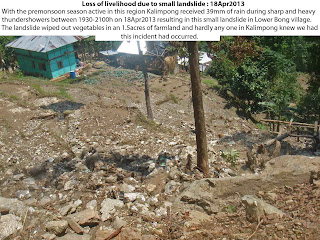 Preliminary inquiries reveal the slide occurred in a village located directly below Kalimpong  due to a mountain stream (Botey jhora, in this case) being overloaded by surface runoff from built up areas of the town during the heavy thundershowers.
This is a well known cause for landslides around urban areas in this region and has also caused much of the landslide fatalities in the area.
Much has been achieved by the scientific community in the study of science of landslides but I daresay little has been done in studying the rate and scale of devastation of land and loss of livelihoods by landslides.

Praful Rao,
Kalimpong
Posted by SaveTheHills at 3:44 PM No comments:

STH had the distinct  privilege of meeting Shri Jaswant Singh, distinguished MP of Darjeeling,during his visit to the hill resort in the first week of Apr2013.
STH President, Wg Cdr Praful Rao(retd) initiated the talk with a power point presentation on the changing rainfall patterns in the hills of Darjeeling and the landslide situation and then went on to suggest/request the following:-
a) Requirement of early warning system which will alert communities.
b) Better means of forecasting/predicting extreme events such as inordinately heavy rainfall.
c) Requirement of GSI Circle Office in Darjeeling district since as per the GSI, we are in an highly landslide prone area and the nearest GSI office is in Kolkata.
d) IMetD Gangtok to include Darjeeling district for weather warnings, forecasts since we are in a contiguous mountainous region and are affected by much the same weather systems as Sikkim.

Praful Rao,
Kalimpong
Posted by SaveTheHills at 12:26 PM No comments:

Almost all landslides in the Darjeeling-Sikkim Himalaya are triggered by rain and therefore one of STH's primary role over the years has been to monitor rainfall. In so doing, we check rainfall on the IMD AWS stations and also track rainfall on our own small network of automatic rainfall gauges (ARGs) which we have installed at 4 places - a fifth ARG will also be up and running by end of April2013 in Mangan (North Sikkim). The locations of our ARGs is shown in the map :- 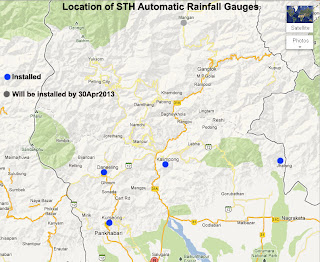 The pre- monsoon season in India technically is from Mar-May and as such our rainfall data chart for the month of March2013 is tabulated below :-

What is worth noting is that Kalimpong on 21Mar2013 received more rain in 90 mins (37mm - excluding hail stones) than the monthly average rainfall (see here for details).

Posted by SaveTheHills at 8:54 AM No comments: