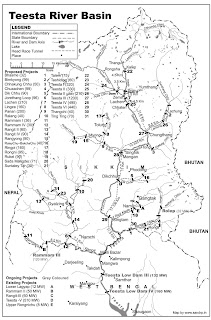 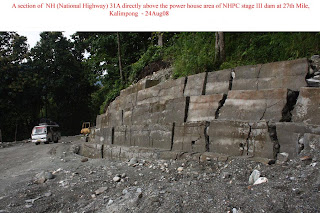 There is no doubt in my mind that dams are an unpleasant necessity - they are the cleanest way of providing energy to a power hungry nation.
Nevertheless, this does little to allay a nagging fear about  the wisdom of constructing so many dams in a Seismic Zone IV area which is also the most landslide prone (GSI) in the country. One certainly hopes that Environment Impact Assessments were not glossed over in order to push these projects thru.
Placed above is a map (source) showing the many dams under construction or completed in the Teesta river basin.

Praful Rao
Posted by SaveTheHills at 3:27 PM No comments: 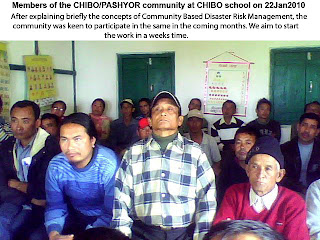 Chibo/Pashyor is one of the most vulnerable areas on the western face of Kalimpong  and the area has been featured on the blog many times. It was also the subject for a paper submitted by STH for the 2nd India Disaster Management Congress held at Vigyan Bhavan (New Delhi) in Nov2009.

STH will be starting Community Based Disaster Risk Management work there with the help of the Govt and other NGOs. This has been welcomed by the community with whom STH held a preliminary meeting on 22Jan2010 at the village school.

Posted by SaveTheHills at 5:26 PM No comments:

Kalimpong town : Sitting on a time bomb with a 'WHAT, ME WORRY?' smile 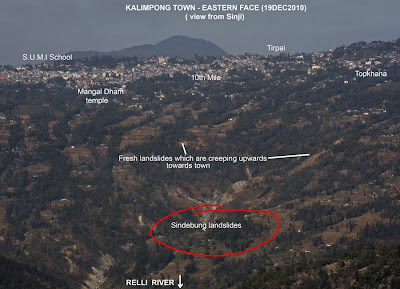 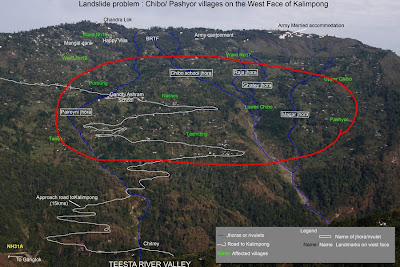 Years ago I was an avid reader of Mad Magazine and our predicament  as regards the landslide issue reminds me, today of Alfred E Neuman's (the magazine's iconic mascot) famous, half-wit question - WHAT ME WORRY ??
Thus, even as experts warn us of impending doom - now that we are in the dry season,  landslides have vanished from our minds and we sit smugly without a single worry.
The above photos show the Eastern and Western faces of Kalimpong with landslides threatening to destablize large parts of the town in the not too distant future.
Whereas there is crucial and immediate necessity of a sustained holistic landslide management program (with much of our work being done during these dry months...) we whittle away precious resources and waste valuable time only to see a recurrence of the entire cycle of events and with much more  ferocity and vengeance in just about 120days from now.
What I am sure of is that the situation is worse not better in Kurseong and Darjeeling and that come the monsoons, we will again live thru 5 months of hell.
But for the time being...

Praful Rao
Posted by SaveTheHills at 3:51 PM No comments: 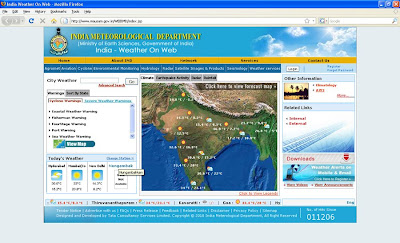 Of all the websites that I visit during the monsoons, certainly India Meteorological Dept's (IMD) earlier website ( http://imd.gov.in/main_new.htm  - which is still not removed),  was certainly the most frequented. I used to check it out (especially the Satellite Images and the Severe Weather Warnings) sometimes as often as 3 times a day...

I am glad to inform you that IMD has now launched a new and upgraded website (it is here).  Some of the new features that one can notice immediately notice are :-

a) You can now register yourself and get weather alerts by email / SMS! (They are still working on the list of cities/towns)

b) You can now CHOOSE the weather stations from where you want weather info.

There are many new features some of which are still on a trial but should be available before the monsoons set in....

Posted by SaveTheHills at 4:27 PM No comments: 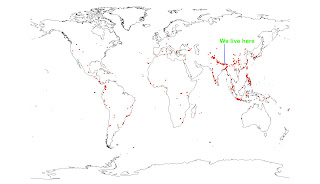 This post presents the data from the Durham University Fatal Landslide database for 2009. This is a map of fatal landslides only with each red dot representing a single landslide recorded on the database.

Comment by Praful Rao
From the above map it is apparent that we live in one of the most hazardous areas in the world as regards landslides, yet nothing much has changed
... so I am pretty much sure that next year we will have yet another map (of 2010 obviously) with those red dots all around us. What a pity!
Posted by SaveTheHills at 9:57 AM No comments:

Arjun Bhandari
KATHMANDU: The parliamentary Natural Resources and Means Committee today directed the government to immediately stop exporting boulders, crushed stones and sand to India, citing serious environmental threat to the Chure range due to over exploitation of the natural resources.
The decision was taken at a meeting chaired by committee chairperson Shanta Chaudhary. The committee has directed the Ministries of Home, Local Development, Industries and Forests to implement the committee decision.
Minister for Forest and Soil Conservation Deepak Bohara, who was present during the meeting, lauded the committee’s decision.
Lawmakers said over exploitation and export of the country’s natural resources had resulted in heavy landslides, flash floods, environmental degradation and massive deforestation in the fragile Chure range.
They even warned that the fertile Tarai region would turn into desert if human encroachment in the range was not immediately stopped. The trucks loaded with boulders are also the major cause of damaging country’s highways that can withstand load only up 12 tonnes, the lawmakers said. Those trucks, however, carry more than 20 tonnes.
The revenue earned from the export of these items is far less compared to the environmental degradation in the Chure range and damage to the national highways, they observed.
With the committee’s decision suspending the export of the boulders, crushed stones and sand to India, hundreds of crusher industries located in the Tarai from east to west would suffer and the investment made in this business would be at risk.
Nepali Congress chief whip, who is a committee member, said the country could not afford the damage caused by environmental degradation in the Chure hills for a few million rupees.
Abhisekh Pratap Sah, a lawmaker of the Madhesi Janaadhikar Forum, objected the committee’s decision and wrote a note of dissent.
Other lawmakers — Navodita Chaudhary, Prithvi Subba Gurung, Rana Dhwoj Limbu, Ram Kumar Sharma — alleged that the government had yielded to the commission agents and did not care about preserving the environment of the Chure range, which plays an important role in maintaining ecosystem in the Tarai.
Rupandehi, Morang, Bara, Makwanpur, Kapilvastu and Nawalparasi are some of the districts from where the largest amount of boulders, crushed stones and sand are exported to India, where they are used for the construction of highways, railways and buildings in Uttar Pradesh and Bihar.
The committee has also formed a sub-committee to come up with a policy regarding the use of the natural resources. The committee had called environment, local development, industry and forest ministers. But Bohara was the only minister to be present during the meeting.
________________________


- my thanks to Dr David Petley, Durham University, (UK) for referring this story

Praful Rao
Posted by SaveTheHills at 6:55 AM No comments:


" Landslides occur as natural phenomena in hilly terrains and also due to disturbances caused by construction activities, e.g., housing and transportation. Natural slopes which have established a balance with the geological and geotechnical features of the area get disturbed by human actions like mining, deforestation and road construction which perforce are required to fulfill the development needs of the area.

Landslides fail to attract as widespread attention as earthquake or cyclone because landslides usually occur in “remote” areas on the hills, often far away from the urban growth centres. Yet instances are plenty where landslides have killed thousands of people and the resulting economic loss to the region has been no less than that from a major earthquake or cyclone."