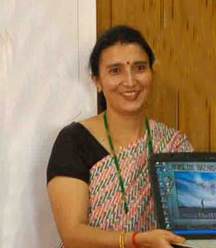 Gayatri was associated with our NGO right from its inception in 2007 and was an executive member of STH.

Ms Gayatri Kharel completed her Masters in Civil Engineering from University of South Carolina, USA and  worked as a research assistant at the University of South Carolina and as Assistant Bridge Seismic Engineer with the South Carolina Department of Transportation USA.
After returning to India she worked as a Structural Consultant in Darjeeling, Kalimpong, Siliguri and Sikkim. She was also a member of Structural Engineers Forum, Indian Institution of Valuers and the Rotary Club of Kalimpong.

She was diagnosed with cancer last winter and underwent an operation in Delhi after which she was undergoing chemotherapy in Siliguri since then. She died on 27Apr2012 of complications during her treatment.

SaveTheHills will always remember Gayatri for her gentleness, her quiet presence and willingness to be a part of all our activities.
She leaves behind her husband Ajit and two young sons.
R.I.P Gayatri, we will miss you.

Posted by SaveTheHills at 6:32 PM 3 comments: 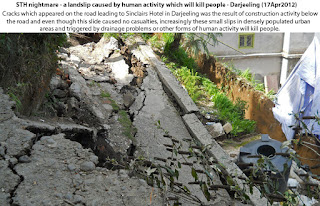 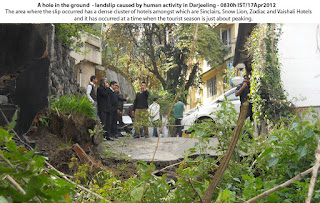 •
"I fear that we will see a legacy of landslides in the urban areas of Asia over the next decade as a result of the incredible rate of urbanization in Asia." - Professor Dave Petley, BSc (Hons) AKC PhD FRGS FGS ILTM CGeog
University of Durham,
UK

The above landslide occurred in the heart of Darjeeling town at approx 0830h on 17Apr2012 and as per people whom we talked to it was caused by construction activity below a road leading to Sinclairs Hotel in Darjeeling.
Except for a few showers in the first week of April2012, we have just emerged from a bone dry winter and as such drainage may not be a significant causative factor in this small slip. 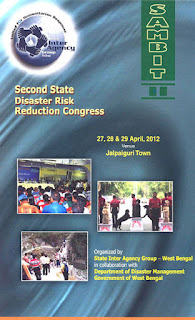 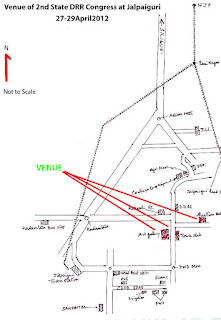 The 2nd W.B State Disaster Risk Reduction Congress is being held in Jalpaiguri between the 27-29Apr2012 and is being jointly organized by the Disaster Management Dept, Govt of W Bengal and the State Inter Agency Group (for details see here).
I am glad to state that STH will be participating in 2 technical sessions regarding landslides.
Praful Rao

Posted by SaveTheHills at 6:56 PM No comments: 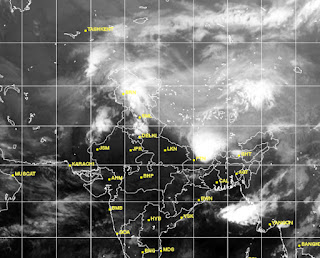 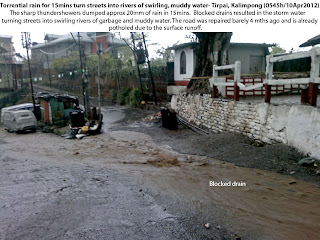 After a bone-dry winter, unseasonal and heavy thundershowers dumped nearly 50mm of rain in a couple of hours. Drains blocked by left-over and discarded construction material resulted in storm water overflowing the drains and eroding the road which was repaired barely 4 months ago.
What is so pathetic about this story is that it is repeated ad nauseam all over the district (and maybe in most human settlements along the entire Himalayas) with no solution in sight.
As per the Regional Met Centre at Kolkata, the heavy rains was caused by an upper air cyclonic circulation over Bihar and adjoining Uttar Pradesh which is pulling in moisture from the Bay of Bengal.
The satellite IR image (of 0530 IST/ 10Apr2012) shows intense convective clouding over Darjeeling and Sikkim.

Posted by SaveTheHills at 9:15 AM No comments: 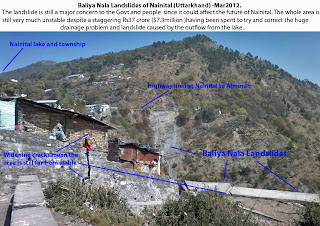 
Comment by Praful Rao
I had the pleasure of meeting Prof RK Pande, recently during the Landslide Conference held at Nainital. I do hope that we can learn from his tremendous experience both as a geographer and an expert on disaster management in the future.
My thanks to him for this article.
Photo Credit : SaveTheHills

Posted by SaveTheHills at 7:42 AM 2 comments: 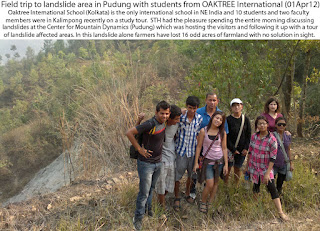 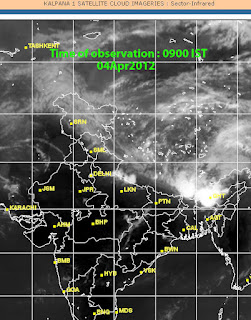 After a bone-dry winter when there was no rain at all, on 03Apr2012 due to an upper air cyclonic circulation east of Darjeeling district, we had a smattering of rain all over the region. The intense thunderstorm activity resulted in welcome showers to quell the dust and perhaps recharge thirsty aquifers.
STH has since 03Apr2012 commenced our "Storm Watch" wherein we watch the weather development in the Bay of Bengal (since we are about to enter the Cyclone Season) and also we have started recording the rainfall in the three major towns (Darjeeling, Kalimpong and Kurseong) with our Automatic Rainfall Gauges (ARGs)
Rainfall in Darjeeling, Kalimpong and Kurseong on 03/04 Apr2012 :- 37mm, 6mm, 16mm respectively.


Praful Rao
Posted by SaveTheHills at 4:40 PM No comments: