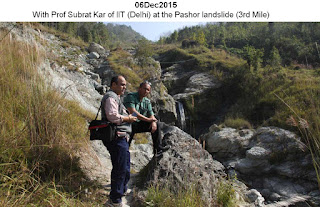 Prof Subrat Kar of IIT Delhi who is a part of the Ulster University team visiting Kalimpong in early Mar2016 was with us for 3 days to reccee landslide areas of Darjeeling district in advance and to report back to the team. We showed him most of the landslide areas around Kalimpong town and also Balasun landslides in Kurseong. 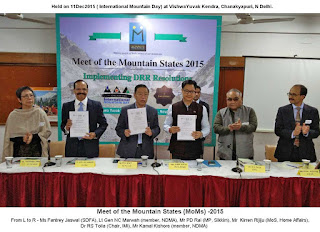 I attended the Meeting of the Mountain states (MoMs) in New Delhi on 11Dec2015, representing the Darjeeling Mountain Initiative which is a part of the IMI. Placed below is the press release from the MoMs meet :-


The Integrated Mountain Initiative held its annual Meet of the Mountain States in New Delhi on 11 December 2015 celebrating International Mountain Day, at the VishwaYuvak Kendra, Chanakyapuri. The Meet followed up on the successful conclusion of the 4th Sustainable Mountain Development Summit held in Itanagar, Arunachal Pradesh in October 2015. The central theme of the Summit was Disaster Risk Reduction, which is particularly crucial for the mountains which face increasingly frequent large- and small-scale disasters such as earthquakes, flash-floods, and landslides. Natural disasters result in loss of lives, and set back the economy of the region by destroying assets, interrupting school education and livelihoods.


To follow up the recommendations made during the Summit, the Meet of the Mountain States was held in the format of a workshop which discussed the implementation of these resolutions, by identifying the implementing bodies, liaison mechanism, resources required, and timelines. The Meet was attended by Lt Gen Marwah and Dr Kamal Kishore, Members of the NDMA, as well as representatives from the NDRF, the State and Disaster Management Authorities from Sikkim, Uttarakhand, and Himachal Pradesh. Grassroots organizations working on disasters on the ground, All India Disaster Mitigation Institute, Delhi and SaveTheHills, Kalimpong participated.


The Chief Guest, Mr KirenRijiu, Hon’ble Minister of State for Home Affairs, recently declared the Champion of DRR for the Asia-Pacific region by the United Nations, gave rousing address espousing his concern about disasters and offering his full support for mitigation and preparedness measures. Mr PD Rai Member of Parliament (Lok Sabha) Sikkim updated the gathering about his participation at the UNFCC COP 21 in Paris, particularly the keen interest in supporting measures for disaster risk reduction in mountain states shown by Margareta Walhstrom, Special Representative of the Secretary-General of the UN for Disaster Risk Reduction.


IMI is a collective initiative of a wide range of stakeholders from across the Indian mountain states, who gather together to deliberate and advocate mountain-centric development policy. 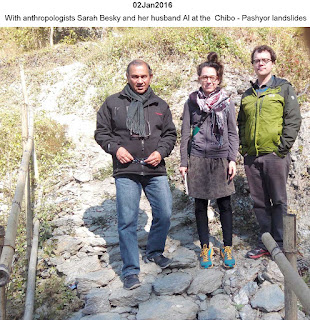 Prof Sarah Besky, an anthropologist and author from Brown University and her husband Al (also an anthropologist) were in Kalimpong for a day to learn more about STH activities and also to do field work on landslides.
Spent much of the day discussing impact of landslides in the Darjeeling-Sikkim Himalaya and also went out for field work on the western and easterns faces of the Kalimpong ridge. 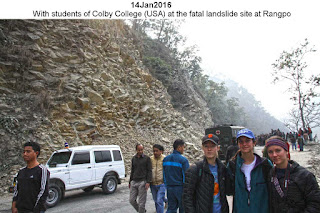 3 Gap students from Colby College (USA) were with us for 3 days on environmental /landslide hazard studies. While they were here the horrible fatal landslide occurred at Rangpo. We were able to see first hand the impact on the unfortunate victims and the community at large.

Posted by SaveTheHills at 6:53 PM No comments: 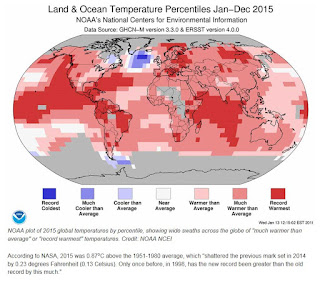 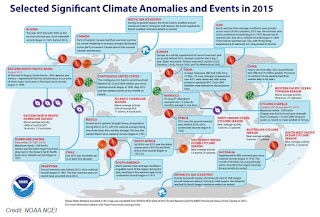 Praful Rao,
Kalimpong,
Dist Darjeeling
Posted by SaveTheHills at 7:08 AM No comments: 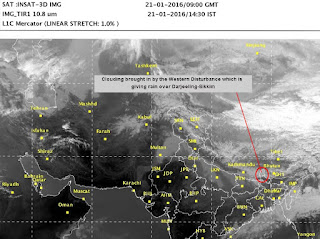 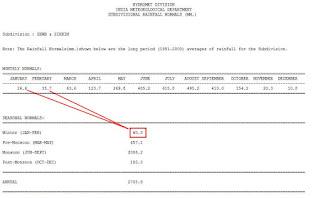 Winter rains have almost totally vanished in the Darjeeling-Sikkim Himalaya and so when a western disturbance seen on IR image (top) brought in a smattering of rain in our region on 20/21Jan2016, it was welcome.
The average rainfall for Sub Himalayan West Bengal (SHWB) and Sikkim for the winter months ie Nov-Feb is around 90mm (see IMD chart above) and thus far we have only had around 12mm of rain over this period in Kalimpong as such the rain will not recharge our aquifers and deliver us from the extreme paucity of water here but at least the dust and haze will settle down.

Posted by SaveTheHills at 4:33 PM No comments: 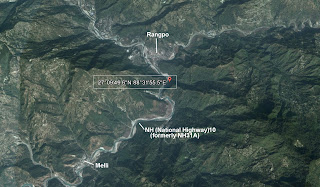 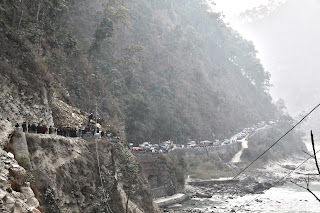 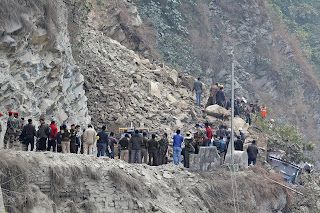 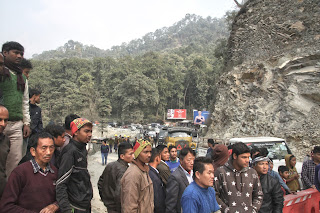 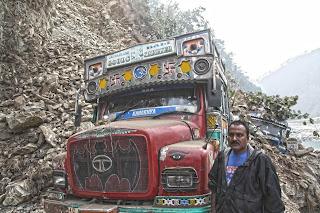 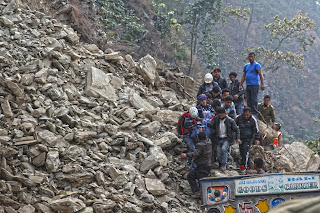 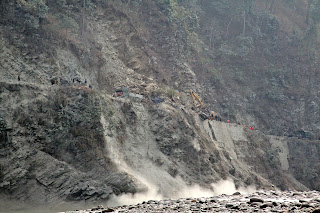 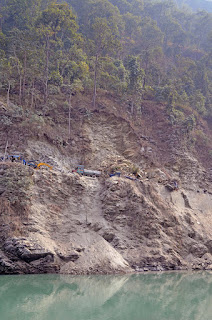 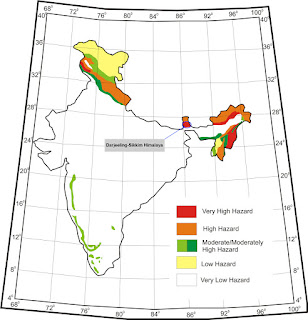 GSI, the nodal body for landslides in the country has recently updated their website with a more graphic map of the landslide prone areas of the country. An excerpt of the information on the GSI website is placed below :-
'In India, about 0.42 million sq. km or 12.6% of land area, excluding snow covered area, is prone to landslide hazard. Out of this, 0.18 million sq. km falls in North East Himalaya, including Darjeeling and Sikkim Himalaya; 0.14 million sq. km falls in North West Himalaya (Uttarakhand, Himachal Pradesh and Jammu & Kashmir); 0.09 million sq. km in Western Ghats and Konkan hills (Tamil Nadu, Kerala, Karnataka, Goa and Maharashtra) and 0.01 million sq. km in Eastern Ghats of Aruku area in Andhra Pradesh. The landslide-prone Himalayan terrain also belongs to the maximum earthquake-prone zones (Zone-IV and V; BIS 2002) where earthquakes of Modified Mercalli intensity VIII to IX can occur, and thus, are also prone to earthquake-triggered landslides. The most recent example is the aftermath of 18 September 2011 Sikkim Earthquake in the Sikkim-Darjeeling Himalayas.'

Italics and map insertion are mine.
Praful Rao,
Kalimpong,
Dist Darjeeling
Posted by SaveTheHills at 6:35 PM No comments:

Vetiver grass is native to south India being known also as Khus in other parts of India. Besides many other uses of the grass, STH became interested in it because of its use in slope protection and its almost magical ability to hold the soil together. In fact, the photo below demonstrates the legendary prowess of the plant's roots. 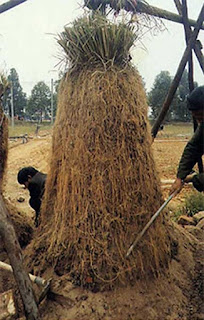 After researching vetiver grass's viability in this environment and also whether it was an invasive grass which would damage local varieties, we 'imported' 10,000 saplings from Kerala in May2011 and distributed it to NGOs in Darjeeling district while planting a large number in and around landslide prone areas in Kalimpong.
Four years after planting the grass, our experience with Vetiver has been disappointing (see photo below). Whereas the roots should have grown to lengths of 7'- 10', our variety has roots which barely measure 2" and the stalk too appears stunted. I have read that shady areas slows the growth of grass.
I request anyone with experience in growing vetiver grass for slope protection and soil erosion control to offer comments. 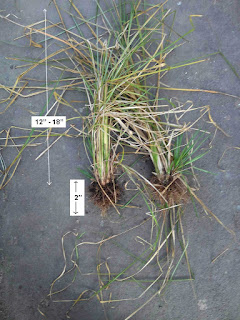 Good news in the New Year (2016) : Funding opportunities from MOEF and a technical document on Landslides by INAE

1. The Ministry of Environment and Forests (MOEF) have recently announced guidelines for the National Mission on Himalayan Studies(NMHS) Grant Facilities and have called for Research Proposals for 2015-16.
Last date for submission of proposals is 20Jan2016.
For details see here
2. The INAE has after two round table meetings on Landslide Risk Reduction, published their recommendations 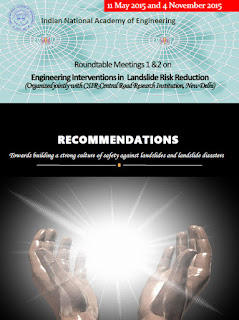 Posted by SaveTheHills at 9:16 AM No comments: