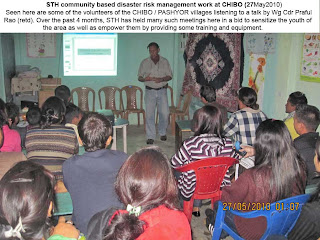 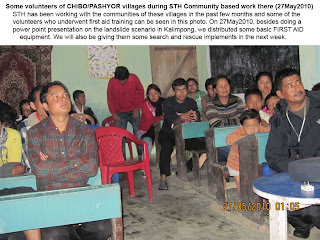 STH has been doing some CBDRM (Community Based Disaster Risk Management) work in CHIBO/PASHYOR villages for the past few months (see here). These villages bore the brunt of  landslides in the month of Aug2009 and now that the monsoons are again at our doorstep we met up with some young volunteers of the area in a village school.What we have been able to do in these villages is sensitize them to the landslide issue, train 11 young people on first aid and equip them with basic FIRST AID equipment. We will also provide them with some rescue equipment shortly. In addition, we have arranged to SMS early warning messagesor bad weather alerts to them about periods of heavy rainfall so that the villagers are better prepared to deal with landslides.Praful Rao
Posted by SaveTheHills at 9:57 AM No comments:

As mentioned earlier, STH along with COMPUSET (Darjeeling) have a network of 3 automatic rainfall gauges (ARGs) with which we are keeping a track of the rainfall at Darjeeling, Kalimpong and Kurseong.
Placed above is our first report on the rainfall - this data will be updated weekly.

Comment by Praful Rao
The type of ARG in use for the above measurements is the Wireless Rain Gauge manufactured by Oregon Scientific.
As is known to all of us, weather (and rainfall) in the mountains can differ wildly from place to place which may be the reason for the wide variations above.

STH stormwatch - death of a Cyclone (and its resurgence?) 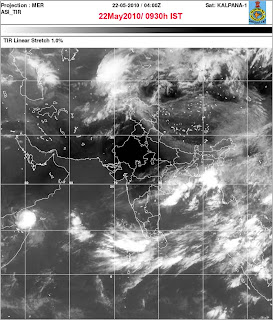 Placed above is a satellite image of what was severe Cyclone LAILA as it hugs the Andhra Pradesh coast line. Much of the destructive energy has now been spent and the cyclone has  been downgraded to a  "depression".
However, meteorologists caution that once it moves into the Bay of Bengal again (by late evening tomorrow) it will recharge some of its venom and sting and finally move northeast towards towards Bangladesh.

Praful Rao
Posted by SaveTheHills at 10:54 AM No comments: 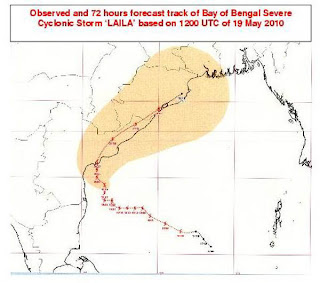 Turn will mean heavy rain in coastal
MEGHDEEP BHATTACHARYYA
, May 19: Set to pound the Andhra coast early tomorrow, cyclonic storm Laila could take a northeast turn later in the day triggering storm and heavy rain in parts of , but weather officials said there was “no reason to panic”.
At Writers’, however, ministers huddled with meteorologists, discussing precautionary measures in case the storm lived long enough to reach Bengal’s coastline for another round of elemental brutality less than a year after Aila.
According to the India Meteorological Department, Laila was still around 1,200km south-west of .
“Frankly, there is no reason to panic yet. Chances of Laila causing Aila-like devastation in Bengal are little,” Gokul Chandra Debnath, director of the Regional Meteorological Centre at Alipore, told The Telegraph this evening after meeting finance minister Asim Dasgupta, disaster management minister Mortaza Hossain, director-general of police Bhupinder Singh and several other officials at the state secretariat.
Weather officials said Laila, after making landfall in Andhra Pradesh, might take a slight north-eastern turn, which is why there were chances of residual storm in coastal and rain in other parts on Thursday night.
“What ’s coastal region might experience is wind speeds of around 60 to 70km per hour and heavy rain towards the evening or night on Thursday. We are monitoring the situation. Today’s meeting was just a precautionary measure,” Debnath said.
Last year, when Aila had struck on May 25, the storm had packed wind speeds in excess of 110kmph in the city and much higher in the coastal areas.
“But one mustn’t forget that Aila had made landfall in , which is why the state had to experience such widespread devastation. Laila, however, is likely to make landfall at Andhra. By the time the residue of the cyclonic storm reaches , there will be little scope of damage from wind speed,” said . P. Sharma, chief meteorologist at a private met agency.
Finance minister Dasgupta said an alert had been sounded in the metropolis and the districts of East Midnapore, North and South 24-Parganas, and .
“We are preparing for heavy rain and strong winds in the coastal districts. We’ve issued warnings for fishermen and have asked district administrations to be ready for evacuating people from near the coasts if needed,” the minister said after the meeting with met officials.
He said 270 relief camps had been opened and 200 more would be set up if needed, a PTI report said.


You can get updates from IMD here
Praful Rao
Posted by SaveTheHills at 6:09 AM No comments: 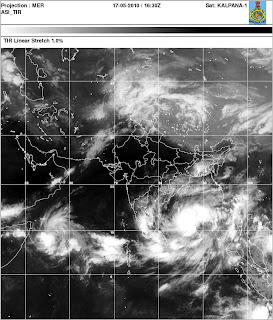 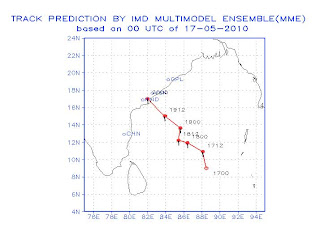 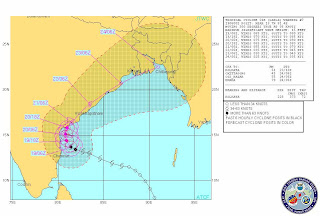 One of the roles of STH during this period is to watch weather developments in the Bay of Bengal with an aim to forewarn the communities of any adverse weather phenomenon (last year we tracked Cyclone AILA and sent out email/SMS alerts)
In so doing we rely on several websites to obtain satellite images, then we do consult experienced meteorologists about the prognosis prior to sending out the email/SMS alerts.
Placed above are satellite images of Cyclone LAILA as it developed in the south east Bay on 18ay2010.


Posted by SaveTheHills at 12:29 PM No comments:

From the Bhutan Observer

Towards tackling landslides
14 May 2010
None of the countries in South Asia has a comprehensive da¬tabase and inventory of land¬slides and damages they have caused, according to a two-day workshop on landslide risk management in South Asia held in Thimphu on May 11 and 12.
Organised by Saarc Disaster Management Centre (SDMC) in collaboration with Minis¬try of Home and Cultural Af¬fairs, it was noted that there were assessments of hazards, vulnerabilities and risks but countries followed different classification system, termi¬nologies, methodologies and scales for landslide hazard zo¬nation mapping.
The need to develop a com¬mon acceptable guideline on landslides hazard zonation mapping, hazard terminolo¬gies and classification system with the help of expert group under the auspices of the Saarc Disaster Management Centre in New Delhi, India, was agreed upon.
Participants recommended to set up a South Asia land¬slide forum comprising land¬slide experts, practitioners, and scientific and technical research organisations work¬ing for landslide risk manage¬ment in the region.
The forum will network and integrate knowledge on land¬slide risk management within the framework of South Asia and meet at regional confer¬ence once in two to three years.
Participants deliberated on landslide problem in Bhutan. They said that, since Bhutan lies in a seismically active zone that is prone to earth¬quake of 4-5 Richter scale, it has to be prepared.
Participants also said that landslides occurs every mon¬soon because the measures taken are temporary, which reduce only the impact aris¬ing from them. The remedial measures taken are bio-engi¬ neering, check dams, crack sealing, construction of re¬taining walls and wire mesh fences that do not mitigate the problems forever.
Environment Assessment Act 2000 requires proper drainage system during con¬struction of roads since im¬proper drainage is one of the factors contributing to land¬slides.
The participants also ex¬pressed concerns over the fre¬quently occurring landslides in Kharbandi, Sorchen and Jumbja areas on the Thim¬phu-Phuentsholing highway. Though the Kharbandi and Sorchen landslides are about 20 and 30 years old respec¬tively, no solution has been found to mitigate the prob¬lem that sometimes cut off Thimphu from India.
No risk treatment has been found except for an alterna¬tive route as an avoidance strategy for Sorchen land¬slide. While some participants suggested surfacing as an an¬swer to almost 1-km Jumbja landslide, one proposed tun¬nelling as a bypass.
By Eshori Gurung
Posted by SaveTheHills at 6:13 AM No comments: 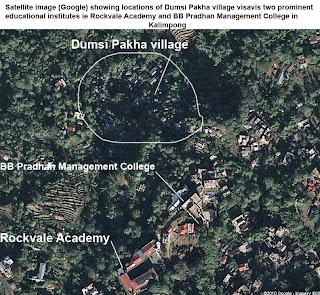 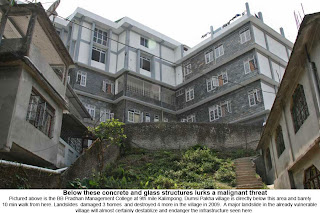 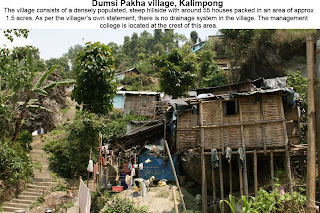 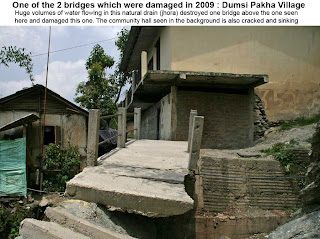 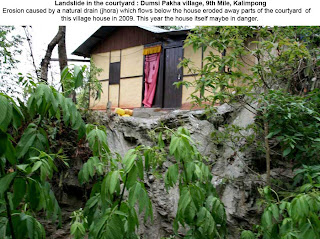 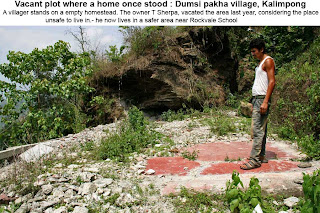 Dumsi Pakha village is a densely packed bunch of approx 55 houses located on a steep hillside below the BB Pradhan Management College in Kalimpong. The village is also wedged in between two large natural drains (jhoras) which is the cause of substantial erosion and instability; sadly in addition to this, the densely populated area has no drainage system whatsoever.
Last year, 3 houses suffered damage and 4 homes were destroyed in the area and people had to be temporarily shifted to the village community hall (which itself is not too safe).
Even a small landslide in this area would kill quite a few people (due to the population density) and a large landslide will certainly destabilize the infrastructure and buildings at the crest.
The GPS coordinates of the area are : N 27° 03.923´, E 088° 27.754´ and the elevation is 1027m/3369 ft . The village is located within the municipal limits of Kalimpong town.


Praful Rao
Posted by SaveTheHills at 3:38 PM No comments: 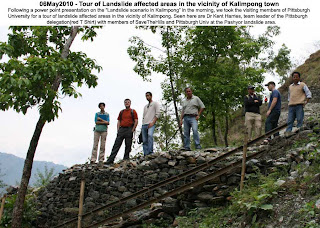 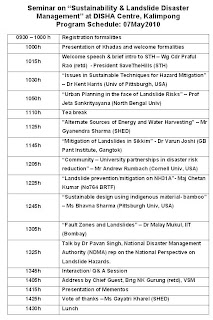 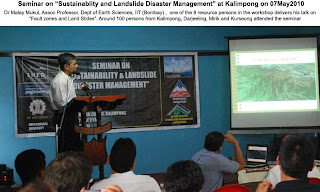 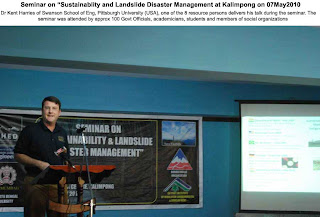 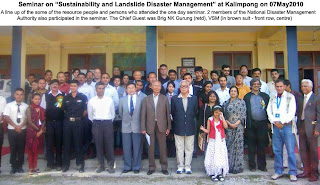 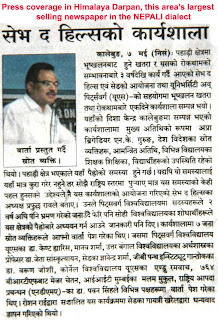 On 06May2010, STH toured landslide affected areas of Kalimpong (CHIBO/PASHOR area and SINDEBUNG ) with 5 members of the Pittsburgh team. We showed them what is causing the landslides (a massive drainage problem) and the rate and scale at which destruction is taking place.
On 07May2010, we conducted the seminar on "Sustainability and Landslide Disaster Management" as per program and schedule. In addition to the line up of excellent resource persons, we did have two officials of the National Disaster Management Authority (NDMA) attending the seminar.  I daresay the seminar was appreciated by one and all.

Spin offs from the seminar are :-
Comment by Praful Rao
My deepest thanks to Mr Roshan Rai (our MC for the event) and all our esteemed resource persons for participating in the seminar and doing so voluntarily.
Posted by SaveTheHills at 3:34 PM No comments:

The 14th Mile Landslides in Kalimpong revisited -02May2010 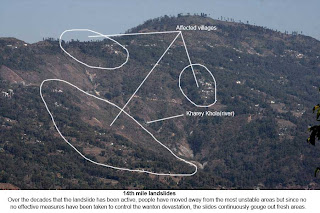 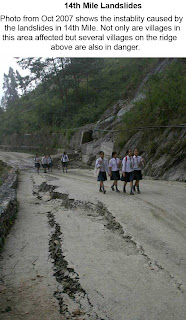 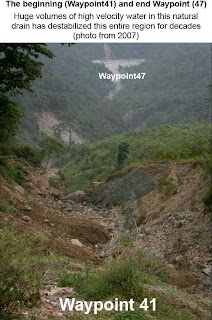 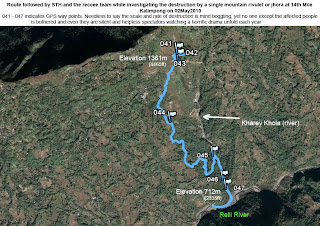 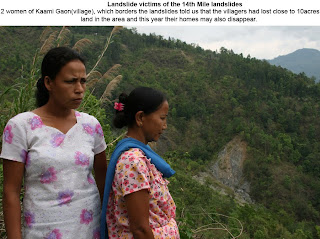 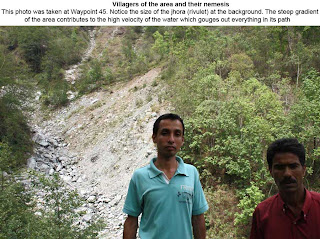 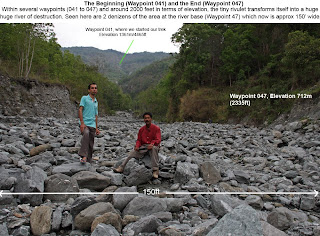 I have covered the 14th Mile landslide problem (here) at Kalimpong earlier in 2007 .
On 02May2010, I was invited by village people of the area to have a detailed look at the area again. What we did was walked all the way form the top (GPS Waypoint 41) to the base of the natural rivulet (GPS Waypoint 47) which is the cause of the instability in the area. During the course of the 5hr walk we interacted with affected people of the area and saw what has now become a familiar sight - farmland which has disappeared, homes which are cracked and despair written on the faces of people.
Even though this problem has been persisting for many decades now, nothing has been done to mitigate or otherwise control this hazard as such now it seems virtually uncontrollable.
Posted by SaveTheHills at 6:48 AM No comments: