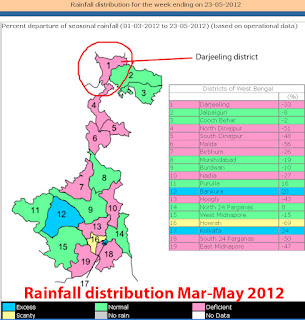 Most landslides in the Darjeeling-Sikkim Himalaya are rain - induced as such the necessity of maintaining a close tab on rainfall. Placed above is the rainfall distribution map from IMetD which shows we are 33% deficient in rainfall for the period Mar-May2012.

Praful Rao
Posted by SaveTheHills at 6:56 AM No comments: 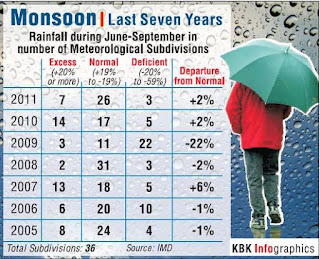 The South-West monsoon is expected to break over Kerala coast on June 1, says the India Meteorological Department (IMD).
A model error of plus or minus four days is assumed on the date of the onset, the IMD said in its forecast outlook issued on Tuesday.

This is the second time in the last seven years that the onset date should get pushed into June.
In 2005, the forecast date was pushed well beyond the first week to June 10; but the actual onset happened three days in advance.
Rest of the years saw forecast onset dates fall into the last week of May, even to the last day. The actual onsets have come about up to four days in advance.
All available indicators and forecasts had in fact suggested that this year the onset of seasonal rains would take place around the normal time.
This, however, is not an indicator to the ultimate performance of the monsoon over the country across time or spatial scales.

In its onset outlook, the IMD seemed to suggest that the onset over Andaman Sea, which preceded that over Kerala by a fortnight or so, might be slightly delayed.
From Andaman, the monsoon rain hits Sri Lanka (five days ahead) before lashing mainland India over Kerala, along the southwest coast.
Monsoon normally advances over Andaman Sea around May 20 with a standard deviation of about one week.
The cross equatorial monsoon flow is expected to appear over Andaman Sea within next few days resulting increased rainfall activity over the area.

Posted by SaveTheHills at 4:19 PM No comments: 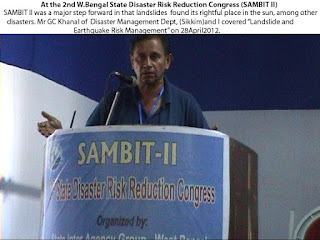 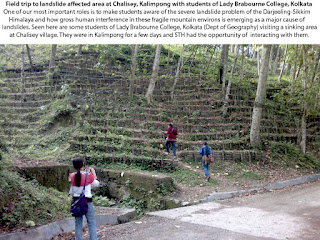 The end of April was busy for us. Bhushan (STH executive member from Kurseong) and I attended SAMBIT II (the 2nd State Disaster Reduction Congress at Jalpaiguri) on the 27-28Apr2012  where landslides did feature amongst other disaster forms of W Bengal.
Also I spent much of the day on 30April2012 with 4 post-graduate women students of the Geography Dept of Lady Brabourne College who along with Smt. Sutopa Mukherjee, Asst Prof of Geography were in Kalimpong for a field  visit to landslide affected areas.

Praful Rao
Posted by SaveTheHills at 10:05 AM No comments:

I am glad to state that we have installed our fourth ARG at Jaldhaka Govt High School.
Jaldhaka is a sleepy little hamlet located in the foothills on the eastern fringes of Kalimpong sub-division. As can be seen from the above tabulation it is place which has heavy and violent thundershowers.

Praful Rao
Posted by SaveTheHills at 7:20 AM No comments: