One of the most important roles of STH over the years is to document landslide occurrences in our region so that this information though not technical in nature is available to scholars, government departments and others.
Unfortunately, due to the lockdowns and restrictions imposed during COVID peaks we could not carry out these surveys in landslide affected areas very far from Kalimpong however, our Whats App group 'Hazard Alerts' proved extremely useful as a crowd sourced information hub where people reported landslides and heavy rain as they occurred and we were able to record these events in our database. 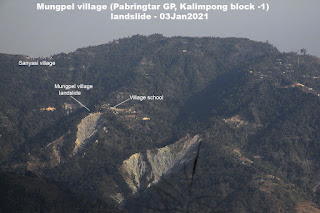 Algarah is satellite town located approx 15km NE of Kalimpong. It has long had a serious  subsidence problem and each year a central part of the town literally sinks. We surveyed the road to Algarah  (which has numerous subsidence zones) and the areas in the vicinity. 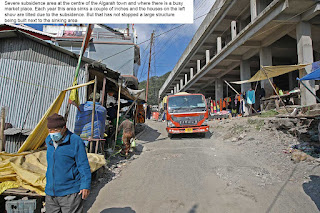 31Jul2021: Survey of landslide affected areas in Kalimpong after extreme rainfall of 29Jul

We had some of the heaviest rainfall of the monsoons in July 2021 and that resulted in a large number of landslides in Kalimpong on 30Jul2021. We surveyed the affected areas. 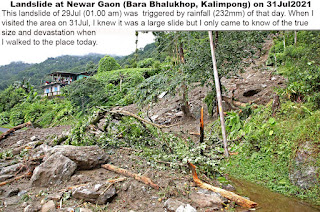 This 👆 is undoubtedly one of the largest landslide in the entire Darjeeling - Kalimpong district.

After a report on the local media (Kalimpong TV) that a large landslide at Berrick Dara on NH10, was causing instability and cracks to the homes of Berrick village we made a visit to the place on 06Aug2021.
Berrick on NH10 has had a long standing problem with landslides. 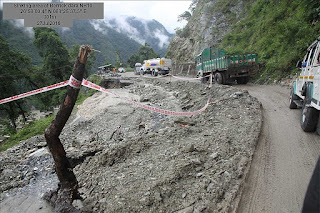 I have participated in many landslide surveys with the GSI over the years and it was a pleasure to be with geologists Sumit and Ankur  during their visit to Kalimpong district.

21Oct2021: Surveying NH10 from Teesta to Rangpo and back via Munsong 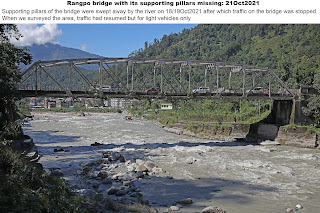 The deluge of 18/19Oct2021 caused a large number of landslides along the NH717A, a highway being constructed as an alternate to NH10. 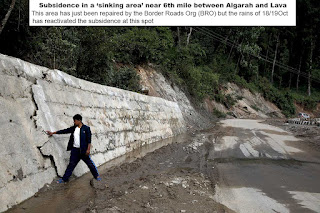 The landslide which damaged part of the SDO Darjeeling quarters (which lies above  the  District Magistrate's office and below Raj Bhavan) occurred on 19Oct2021. The watchman (chowkidar) died when he was buried by the slide.

Many of the surveys are covered in more detail in this blog (pl check blog for the month and date).
Otherwise thanks to Ms Shreya Gurung of STH, we have a data base of landslides where we have recorded the coordinates/rainfall/ damage caused by the landslide. They are here

Posted by SaveTheHills at 10:13 AM