As a part of our landslide surveys, I visited Mungpel, a small village in Pabringtar GP of Kalimpong (Block -1) on 03Jan2021. The village consists of 30 odd houses who are almost entirely of members of Limbu ethnic group. The sombre fact is that of these homes, approximately 10-15 overlook and are in the proximity of huge landslide. 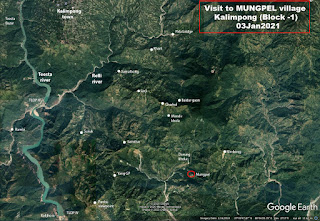 We had carried out a landslide survey in this area in April 2011 and a map of the area from that survey is placed below: 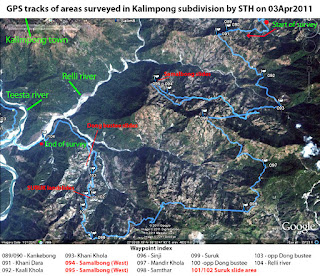 Landslide history
As per locals, the landslide was insignificant until 2018 after which it has grown to its present size. This whole area receives very heavy rainfall and is thrashed by intense thunderstorms during the pre-monsoons but it is a pity there are no rainfall data from this place to relate the landslide activity.
However, the locals clearly said most of the damage was done during the monsoons of 2020 especially around end of Jun2020.
Coordinates of Mungpel Landslide:
N 26.95696° E088.54993° 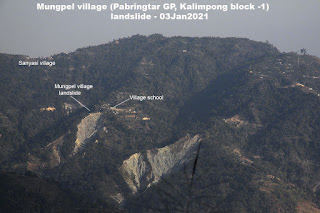 At the base of the this hill there is a fairly big Durung khola (river) and a wonderful flat piece of land where the villagers do their agriculture and farming. As per the villagers the landslide was not due to toe erosion by the river and was caused by the inherent geology and heavy rain.
Yet another major landslide in the lower Sherwani area, nudges the Mungpel landslide and we have yet to survey that area. 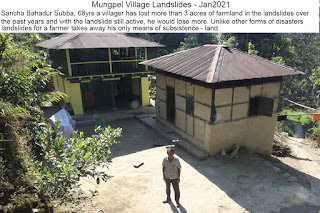 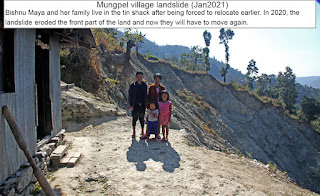 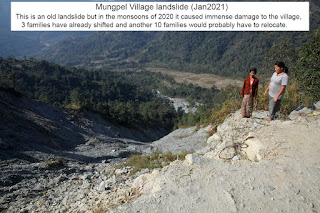 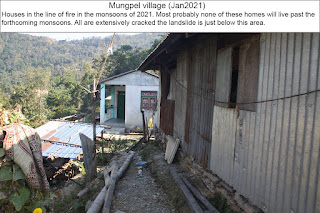 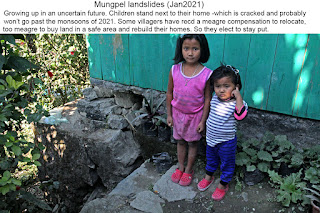 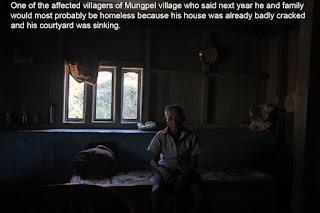 As I have mentioned 3 families have already relocated to upper regions but some 10 other families also may suffer a similar fate - these monstrous landslides are seem impossible to control without serious study and funding.

Posted by SaveTheHills at 4:07 PM