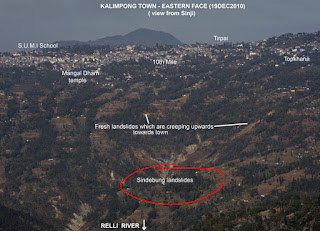 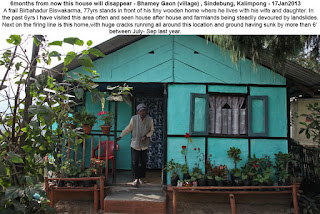 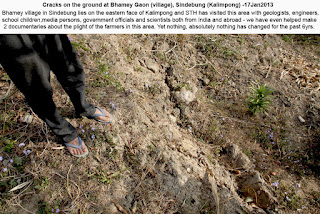 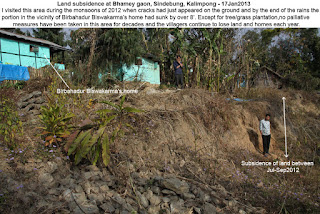 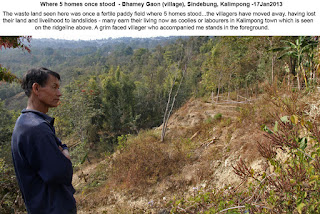 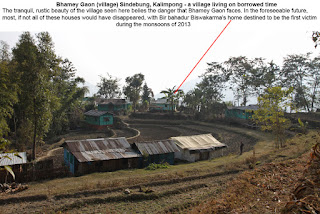 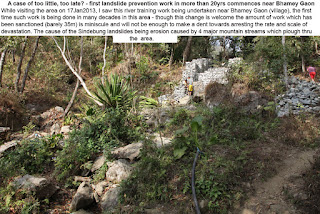 1. The landslides at Bhamey Gaon (N 27°04.136’, E 088°29.626’, elevation 919m) at Sindebung, in Kalimpong have been featured many times on this blog earlier mainly because
a) This landslide if ignored for much longer would impact the stability of Kalimpong town itself (see top image)
b) Something can still be done here to arrest the decay and devastation and the landslide situation is not hopelessly out of control, like in many other areas of the Darjeeling district (eg Balasun, Chibo/Pashyor, and Samalbung).
c) The rural community of this area have suffered in silence for decades despite the many visits by politicians, engineers, geologists, media, scientists and the much touted "paradigm shift" towards disaster prevention and preparedness which has yet to see the light of day in this village.
2. The following persons have lost their land, property, homes and moved elsewhere with their families :-
i)     Shri DS Bhujel
ii)    Shri KB Sundas
iii)   Shri BB Bhujel
iv)   Shri TB Thapa
v)    Shri TB Bhujel
vi)   Shri Gopal Chhetri
vii)  Shri Shiv Kr Bhujel
viii) Shri HB Bhujel
ix)   Shri Ganga Ram Sundas
3. The following persons will lose their land and homes in the foreseeable future
i)    Shri BirBahadur Biswakarma - by Sep2013.
ii)   Shri Shyam Bhujel - within 5yrs.
iii)  Shri Dirga Bahadur Bhujel - within 5yrs.
iv)  Shri RB Bhujel - within 5yrs.
v)   Shri  RB Biswakarma - within 5yrs.
vi)  Shri Sanjay Bhujel
vii) Shri Dilip Bhujel
viii) Shrimati Remina Pradhan
3. This highlights perhaps the most striking difference between landslides and most other forms of disaster
- that after floods and even earthquakes, the victims or survivors can still return to their land and start the painful progress of rebuilding......
- in the case of landslides, the victim or survivor has nothing left to return to because the land itself and everything on it is gone.
Praful Rao

Posted by SaveTheHills at 11:16 AM