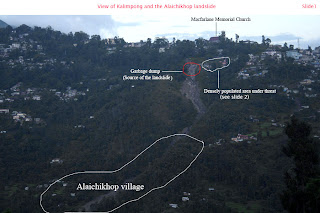 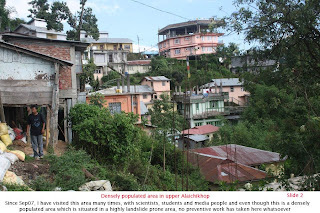 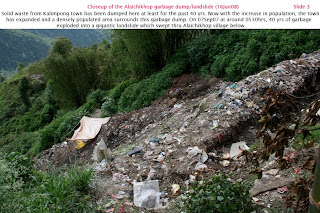 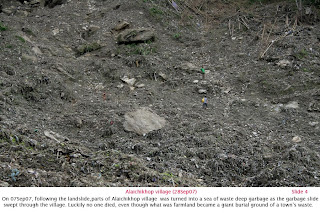 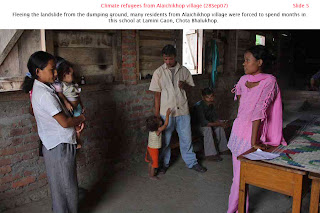 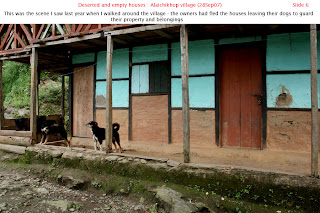 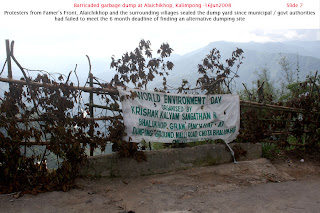 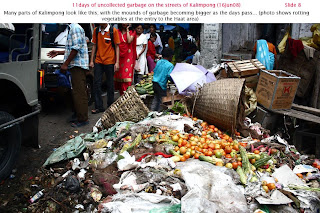 The Alaichikhop landslide (slide 1) has been featured on STH at length earlier (refer blog of Mon, 01Oct2007- Alaichikhop's forgotten children) and I have visited the place many, many times - with GSI scientists, school children, media people and students from NBU - perhaps because it is so close to town (within the municipal limits) and also because it is an example of a densely populated area in a hazardous landslide zone (slide 2).
As with all other places, despite our many, many letters to the state administration since Sep07 not even a stone has been moved here by way of landslide prevention and the people of the area are scared whenever it rains heavily (refer blog of Sat, 29Mar2008).
After Sep07, a meeting was held between the municipality, the state administration and residents of this area where it was decided that the dumping ground would be shifted to an alternate place within six months.
It so happens that I know the designated alternate dumping ground in Lower Newar Gaon well and it is a rugged, inaccessible area which is connected only by a dirt track and being so the question of plying trucks full of waste to and from the alternate site is totally impractical.
Since no landslide prevention has not taken place in Alaichikhop and the municipality & govt have not adhered to their promise of shifting the dumping ground away from Alaichikhop, the Farmer's club, along with villagers from the surrounding areas barricaded and sealed the dumping ground on 05Jun2008 (World Environment Day) (slide 7) to protect their homes from further landslides with the onset of the monsoons.
As such with no place to remove and dump the waste, Kalimpong town itself has become a gigantic dumping ground .... (Slide 8)
praful rao

Posted by SaveTheHills at 8:48 AM