Report on the DRR Seminar held at Kaliimpong on 17Aug2015 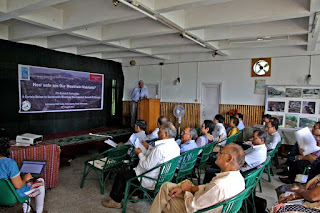 The workshop was organized by Integrated Mountain Initiative (IMI), a platform of diverse stakeholders working on issues pertinent to the Indian mountains. Darjeeling Mountain Initiative (DMI) a chapter of the IMI in Darjeeling district, (of which STH is a member) was the local host for this workshop. This workshop is a curtain raiser to the Sustainable Mountain Development Summit (SMDS) IV (Arunachal Pradesh) in October 2015.


Some of the key outputs of the discussions of the workshop were:

1.      Rainfall: There are huge information gaps in rainfall maps in the mountains. Moreover the monsoon prediction is more plain area based and there is no prediction on impact of monsoons in the mountains. Early warning systems for disaster in the mountains is necessary
2.      Earth Quakes: The Himalayan states are highly vulnerable to high intensity earthquakes and places like Jammu and Kashmir, Sikkim and Darjeeling are in high-risk zones. More work on Earthquakes need to be done for other states of Northeast India.
3.      Infrastructure: For rural and urban infrastructure which is rapidly spreading in the mountains, currently there are sophisticated and simple non-invasive techniques to test buildings for earthquake resistance. Additionally construction of roads, which is a key indicator of development in the mountains, needs to be reviewed thoroughly. Here too there are less stress causing, relatively low cost and simple methods that can be adopted with more engineering science.
4.      Landslides: Detail maps for landslides are available for some sites and these need to be prepared across all scales from a landscape level to site level and even to a households level. These need to be made available to decision makers in different government sectors so that planning is disaster sensitive.
5.      The bottom line is that mountains are highly vulnerable to disasters and so a paradigm shift in managing disasters is necessary from the current relief centric to more preparedness and risk reduction centric pathways.
6.      IMI would coordinate and approach with the Governments of Sikkim, Arunachal Pradesh and Nagaland to take the panel of experts to these states and interact with Government Department making them aware about impending disasters in the mountain states.
7.      A similar action was identified as being absolutely necessary for the Darjeeling to make the various sectors of the government aware about the vulnerability of Darjeeling to disasters.
8.      The meeting agreed that coordination between the different departments of the government is necessary to make disaster risk reduction in the mountains more effective. As of now this cross-sectoral approach does not exist in most mountain states.
9.      IMI with its local chapter Darjeeling Mountain Initiative would be an enabler in coordinating with the GTA to come up with a Darjeeling Hills specific Disaster Risk Reduction Strategies as per the need identified by the Hon MLA, Darjeeling. Additionally an assessment of various state-level Disaster Management Plans was also deemed necessary to address mountain specific needs for disaster risk reduction.
10.  The proceedings of the meeting are further being collated and will feed into a DRR paper to be finalised in the Sustainable Mountain Development Summit to be held in Itanagar, Arunachal Pradesh in October 2015.

Posted by SaveTheHills at 7:30 AM No comments: Links to this post

From the Scientific American (Jul2015 issue) : 'The Impending Dam Disaster in the Himalayas' 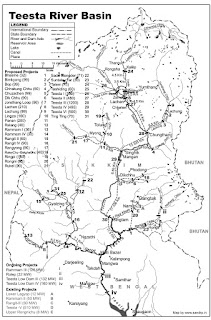 Two of the most populous nations—China and India—are building hundreds of dams in a violently active geologic zone
By Madhusree Mukerjee | Jul 14, 2015
Earlier this year earthquakes in Nepal leveled thousands of buildings, killed upward of 8,500 people and injured hundreds of thousands more. The magnitude 7.8 and 7.3 temblors also cracked or damaged several hydropower projects, underscoring another imminent danger: dam bursts. More than 600 large dams have been built or are in some stage of construction or planning in the geologically active Himalayan Mountains, but many are probably not designed to withstand the worst earthquakes that could hit the region, according to a number of seismologists and civil engineers. Should any of the structures fail, reservoirs as large as lakes could empty onto downstream towns and cities. A collapse of Tehri Dam in the central Himalayas, which sits above a fault, would, for instance, release a wall of water about 200 meters high, slamming through two towns. In total, the flooding would affect six urban centers with a combined population of two million.
More powerful earthquakes are indeed likely to strike the Himalayas in coming decades, seismology models show. The Indian subcontinent is pushing under the Tibetan Plateau at roughly 1.8 meters per century, but it regularly gets stuck; when the obstruction gives way, a section of the Tibetan plate lurches a few meters southward and releases the pent-up energy in an earthquake. The Nepal earthquakes also destabilized the region to the west, notes Laurent Bollinger, a seismologist at the French Alternative Energies and Atomic Energy Commission. Destabilization makes a great earthquake, which is defined as having a magnitude of 8.0 or higher, more likely to occur sooner rather than later. Other studies indicate that the earthquakes released only a mere fraction of the stress of this fault line, which is expected to readjust with quakes of equal or higher magnitude. “Whether they'll break now, in an 8 or wait another 200 years and then give way in an 8.7, one cannot say,” says seismologist Vinod K. Gaur of the CSIR Fourth Paradigm Institute in Bangalore.
Such seismically active regions are exactly where hundreds of dams 15 meters or higher are either under construction or being planned, most of them to supply hydropower to India or China. Any dam being built during this government-funded boom, as well as those already completed, must be able to withstand the strong ground shaking of an extreme earthquake, says Martin Wieland of the International Commission on Large Dams, a group of engineers that makes recommendations for structural standards. Although every nation has its own regulations, India and China are secretive about their dam designs when it comes to public scrutiny. Independent engineers rarely are allowed to evaluate the robustness of the structures, and when they are, the results can be unsettling. For example, Probe International, a Canadian environmental research organization, reports that designers for China's Three Gorges Dam used “the most optimistic interpretation possible” of seismic shaking. Similarly Tehri Dam never underwent realistic simulations, asserts Gaur, who served on its oversight committee, along with civil engineer R. N. Iyengar, formerly of the Indian Institute of Science in Bangalore. Government-affiliated scientists and engineers claim that Tehri Dam can survive an 8.5 shock, but outside experts are not so sanguine. Any of hundreds of dams could be in danger of bursting when the next big one hits. If that were to happen during monsoon season, when the dams are full, the consequences could be catastrophic.
see also:
Local corruption can complicate matters, enabling contractors to get away with using substandard materials or deviating from mandated parameters. A 2011 study published in Nature found that an overwhelming majority of deaths from building collapse in earthquakes occur in corrupt countries.  What is more, Transparency International, a nongovernmental organization that highlights corruption, identifies public construction works as one of the world's most bribery-prone industries—with dams being of special concern. Scandals involving dam projects have roiled both India and China, to the extent that the former Chinese premier, Zhu Rongji, coined the evocative term “tofu construction” to describe a defective dike.
A handful of scientists who understand the hidden dangers of the Himalayas have taken the lead in arguing for realistic, undisguised assessments aimed at protecting the region's population, though only with limited success. In a case brought by environmentalists against Tehri Dam, the Supreme Court of India sided with government scientists to dismiss safety concerns. And in 2012 seismologist Roger Bilham of the University of Colorado Boulder was deported from the New Delhi airport, in part, he says, for his unwelcome prediction that the Himalayas can sustain a magnitude 9.0 earthquake. Bilham contends that the Indian government has since discouraged foreign collaborations in seismology.
For now, all concerned parties can do is call attention to the problem. “Sunshine is the best disinfectant,” says Peter Bosshard of International Rivers in Berkeley, Calif. “Without public scrutiny, it is much easier to get away with cutting corners.” Given the stakes, more than sunshine will be necessary: the next great earthquake in the area may well result in a man-made tsunami.
This article was originally published with the title "The Impending Dam Disaster in the Himalayan Mountains."
Original article is from Scientific American
Map of dams in the Teesta River basin is from here

Posted by SaveTheHills at 5:40 PM No comments: Links to this post

STH stormwatch : Reporting a Low Pressure Area in the Bay of Bengal (11Aug2015)

Praful Rao,
Kalimpong,
Dist Darjeeling
Posted by SaveTheHills at 9:27 PM No comments: Links to this post 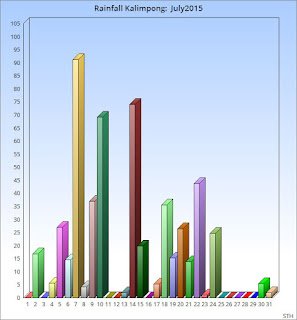 Posted by SaveTheHills at 1:15 PM No comments: Links to this post

1.In the absence of more detailed information from IMD websites (which seem to be on an extended weekend holiday) through the day , I have placed above :-
a. Satellite image from Nepal MFD which shows the storm position at approx 8.00pm IST.
b. Image of lightning (blue dots - associated severe weather in thundershowers and rain) in the entire south Asian region from the University of Washington at approximately the same time.
The lightning position in India coincides with the storm position.( The red stars in the lower image indicate position of the ground stations for lightning detection)
2. The absence of clouding from south Bengal as compared to previous image should come as a huge relief to most of us.

Posted by SaveTheHills at 10:08 PM No comments: Links to this post

Above satellite image has been obtained from Nepal MFD since the IMD website is not working from 05.00am till the time of this report.
The storm has moved over Chatisgarh but the image shows significant clouding over south Bengal. I have verified that it is not raining in Kolkata at least.

Praful Rao,
Kalimpong,
Dist Darjeeling
Posted by SaveTheHills at 4:00 PM No comments: Links to this post

Excerpt from IMD Bulletin 27 (Bay of Bengal) issued at 2000h (IST) on 01Aug2015
'The depression over Bangladesh moved west northwestwards and lay centred at 1730 hrs IST of today, the 01 August 2015 over Gangetic West Bengal and adjoining Bangladesh near latitude 23.80N and longitude 88.40E, about 30 km south southeast of Berhampore (West Bengal). It would move west northwestwards and weaken into a well marked low pressure area gradually.'

Comment by Praful Rao
I wish IMD would give more frequent weather bulletins and analysis especially when we are exposed to severe and extreme weather. It is pathetic that position of the storm has been updated after almost 9hrs (Bulletin 26  and information on the storm position was issued at 11.30am this morning after which there was no update till now).
The state of IMD AWS/ARG stations are no less dismal with most of the AWS/ARG stations either non-functional or giving erratic data.
Thank goodness their satellite imagery is different and works almost flawlessly well.

Praful Rao
Kalimpong,
Dist Darjeeling
Posted by SaveTheHills at 9:53 PM No comments: Links to this post

'The depression over Bangladesh remained practically stationary during past 3 hours and lay centred at 0830 hrs IST of today, the 01 August 2015 over Bangladesh near latitude 23.20N and longitude 89.20E, close to Jessore (Bangladesh). It would move west northwestwards and further weaken into a well marked low pressure area gradually.'

Posted by SaveTheHills at 1:39 PM No comments: Links to this post