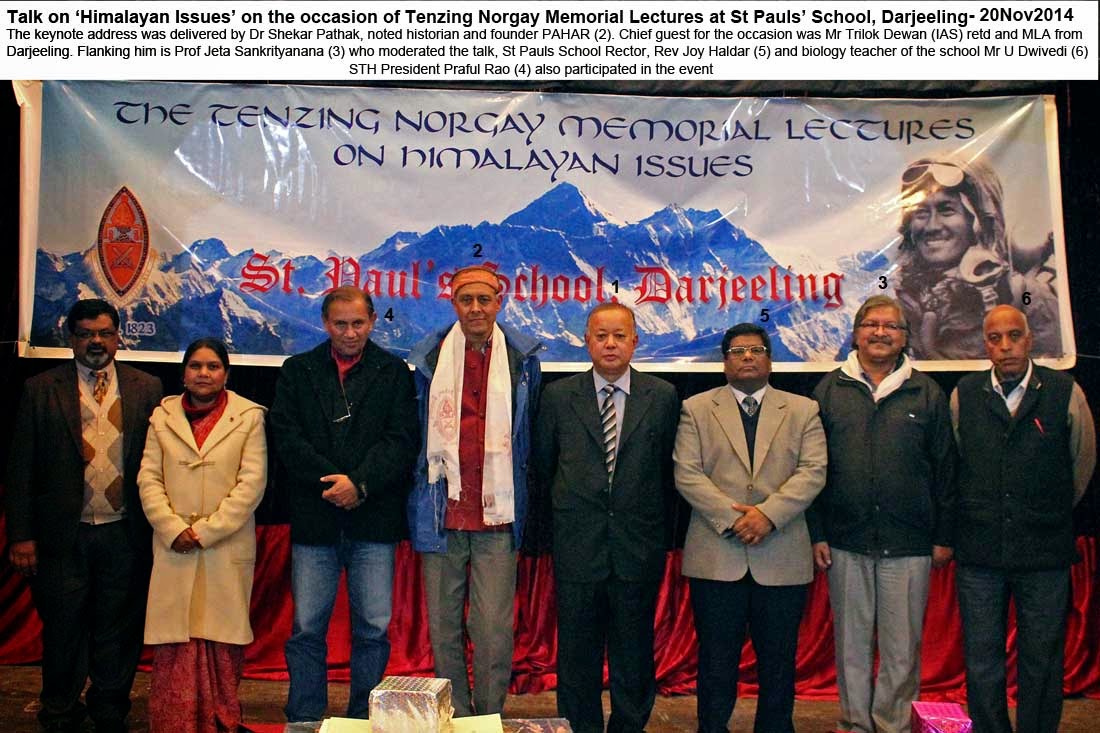 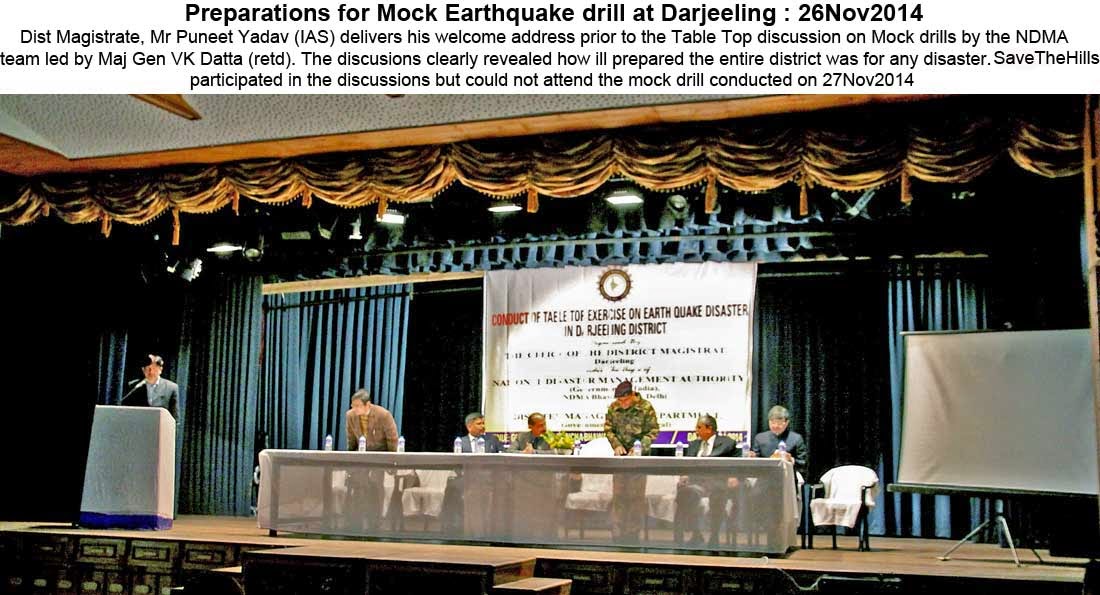 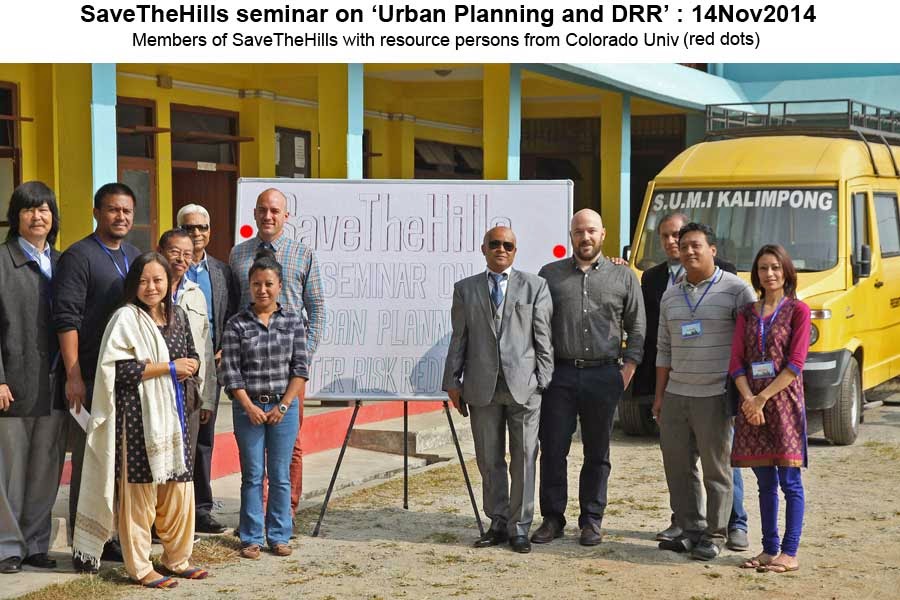 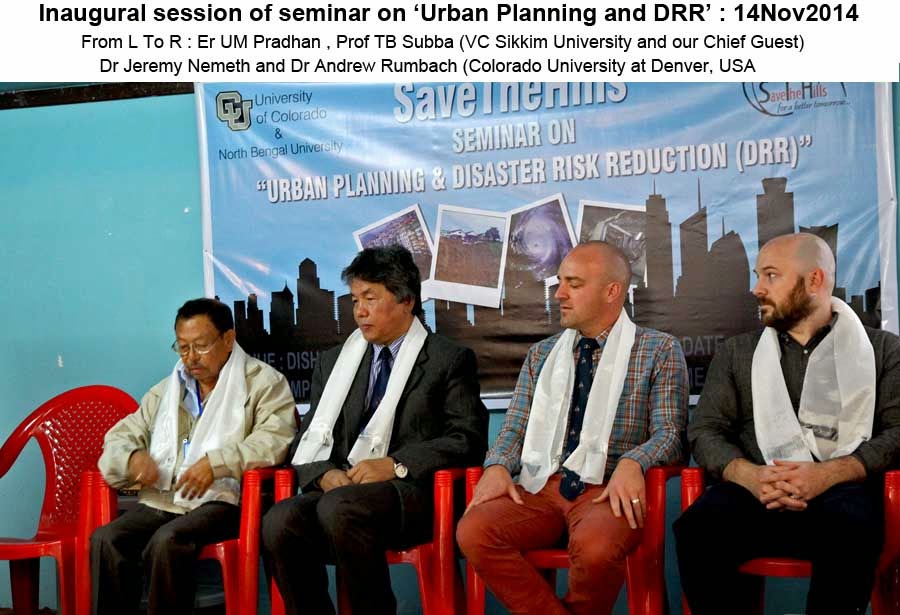 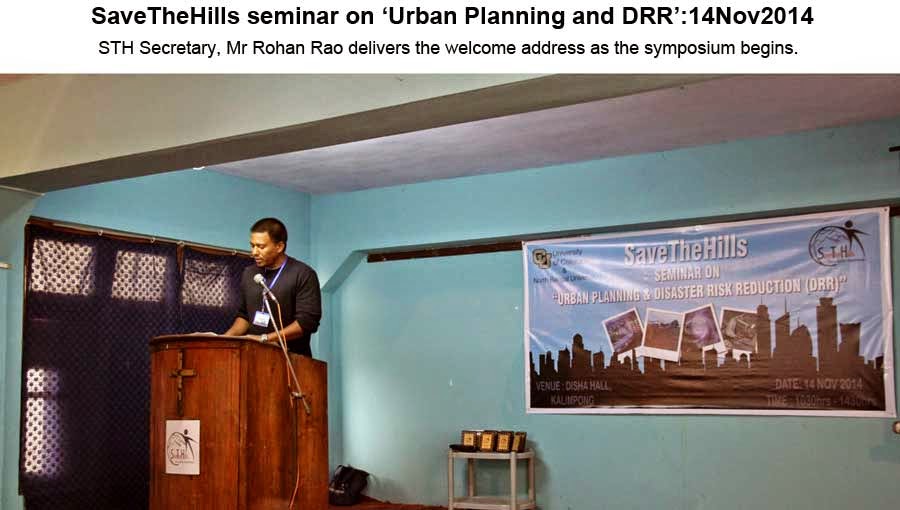 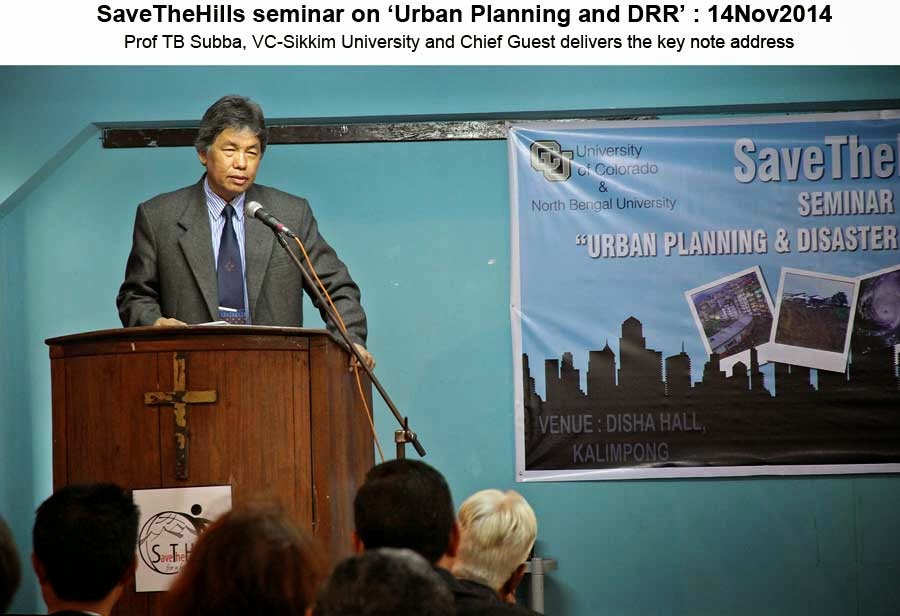 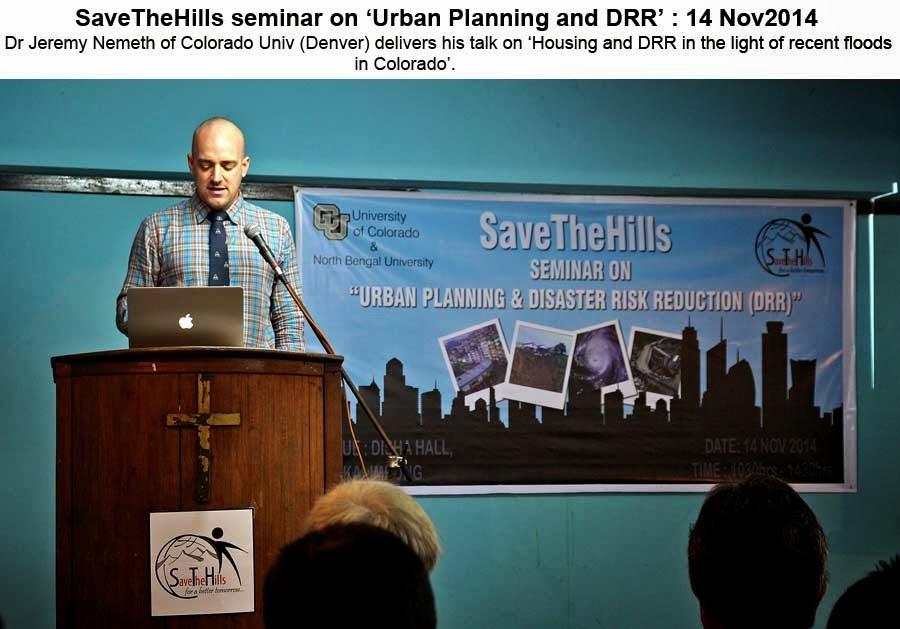 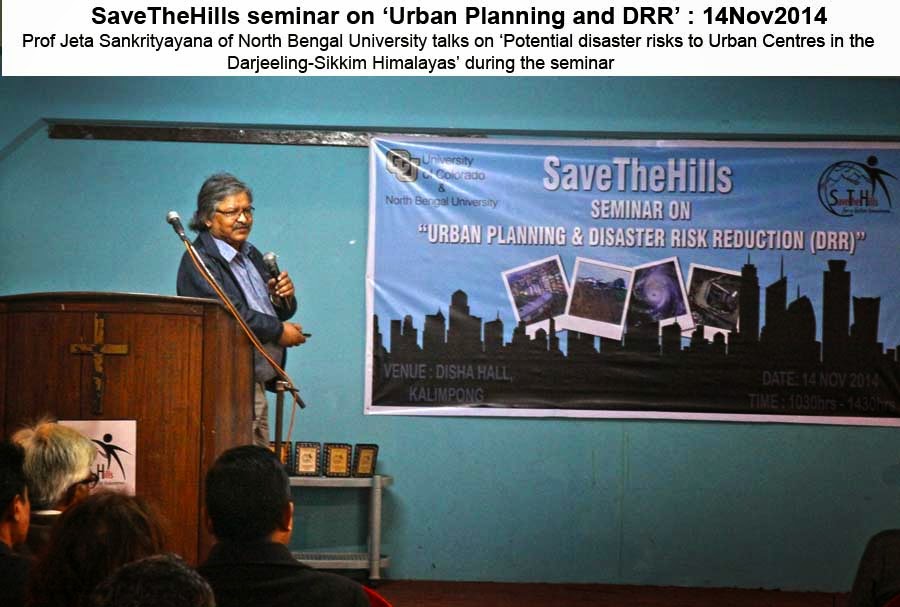 We would like to thank all those who travelled from distant shores and across rivers and valleys to attend our seminar - thanks to them the seminar went off wonderfully well.

Praful Rao,
Kalimpong,
Dist Darjeeling
Posted by SaveTheHills at 11:11 AM No comments:

STH Stormwatch (11Nov2014) : Reporting a low pressure in the Bay of Bengal 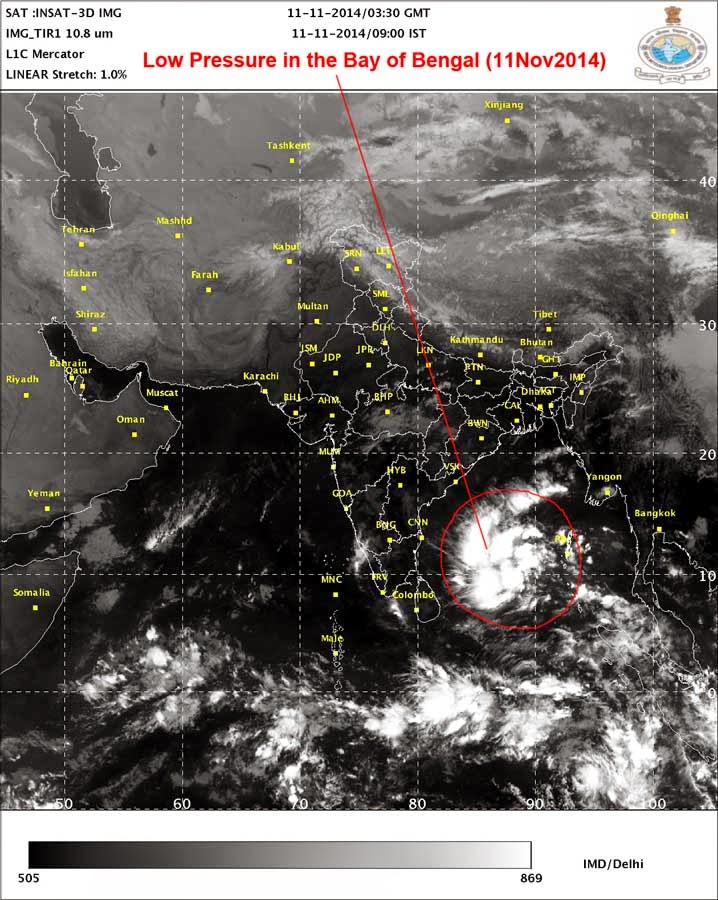 Posted by SaveTheHills at 10:19 AM No comments: 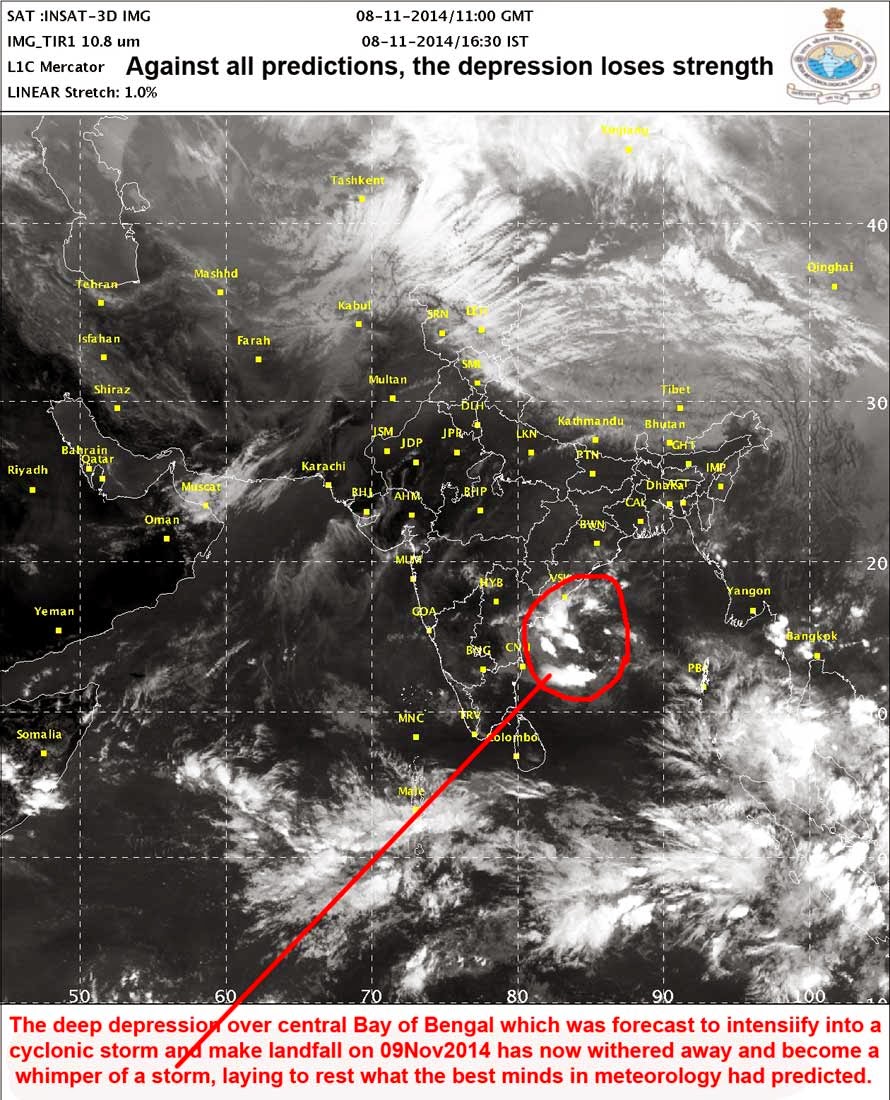 Having almost, well, a jihadi belief in the predictions of meteorological science, it is scary to think their forecasts could also go wrong.
So it is good the storm weakened (and became a low pressure instead of blossoming into a full blown cyclone as predicted) but what if the forecast had gone awry and the depression had become a Very Severe Cyclone in a lesser time than forecast?
Scary!

Posted by SaveTheHills at 8:18 PM No comments: 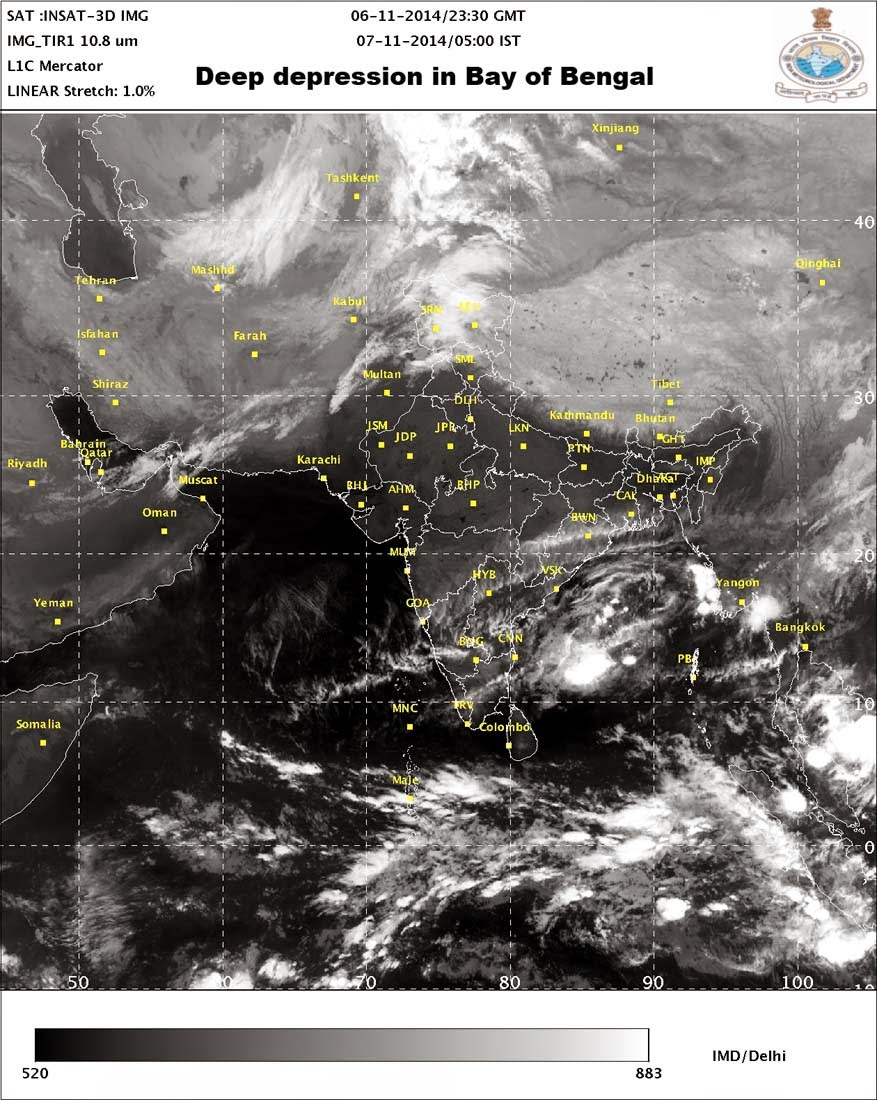 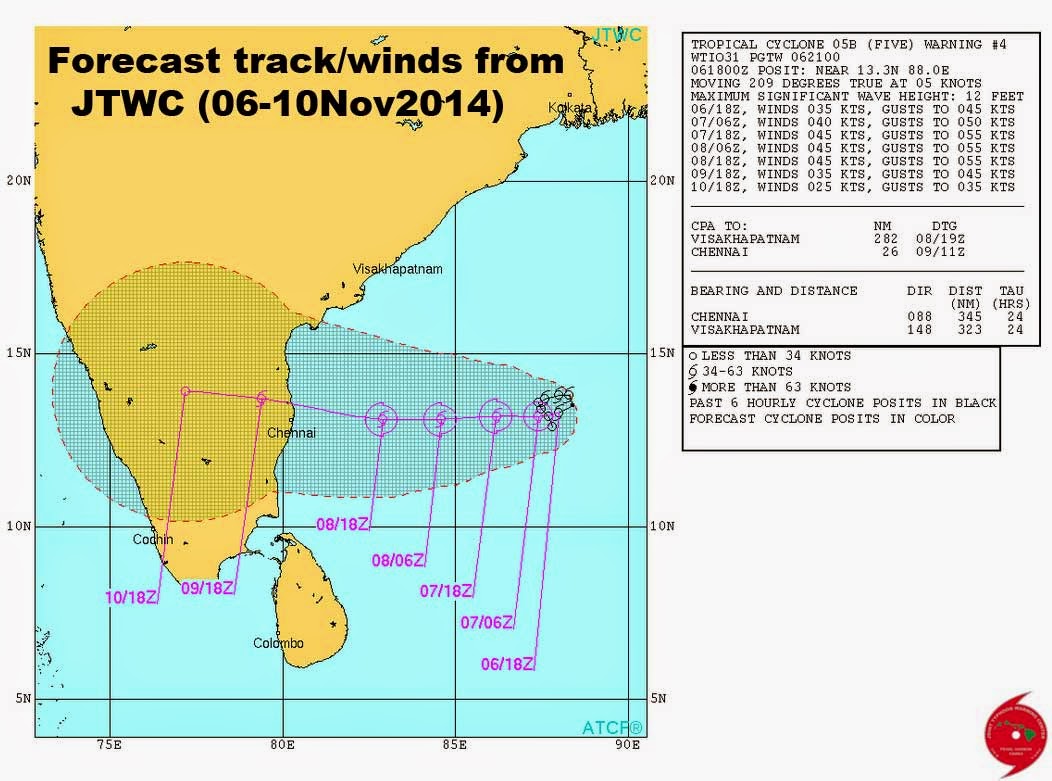 Praful Rao,
Kalimpong,
Dist Darjeeling
Posted by SaveTheHills at 6:26 AM No comments:

STH Stormwatch (06Nov2014 update) : The depression in the Bay of Bengal intensifies 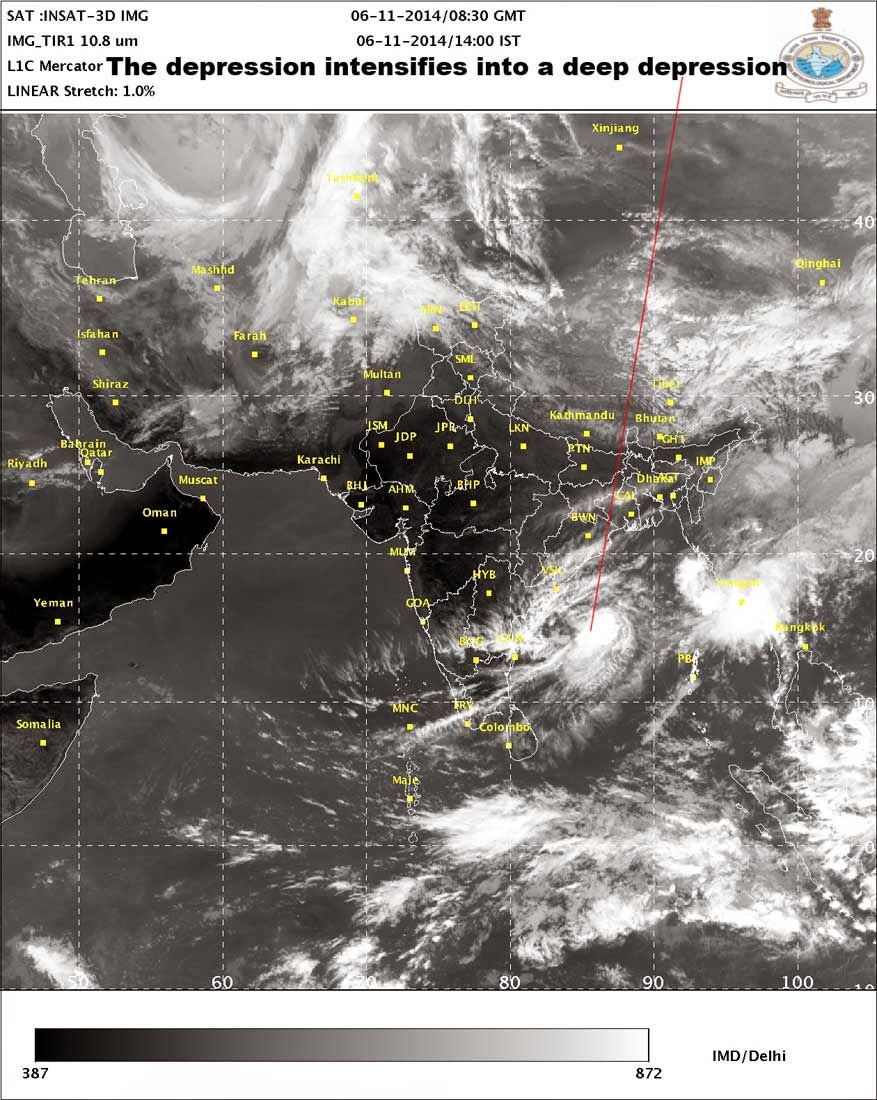 ‘The depression over central Bay of Bengal moved north-northwestwards during the past 6h, intensified into a deep depression and lay centred at 0830 IST on 06Nov2014 over central Bay of Bengal , 580km southeast of Vishakhapatnam. It would move northwestwards and intensify further into a Cyclonic storm during next
24h. It would then move west ­northwest towards Andhra Pradesh coast. It would weaken gradually into a depression while reaching the coast on 08Nov2014, night.’

Posted by SaveTheHills at 3:35 PM No comments: 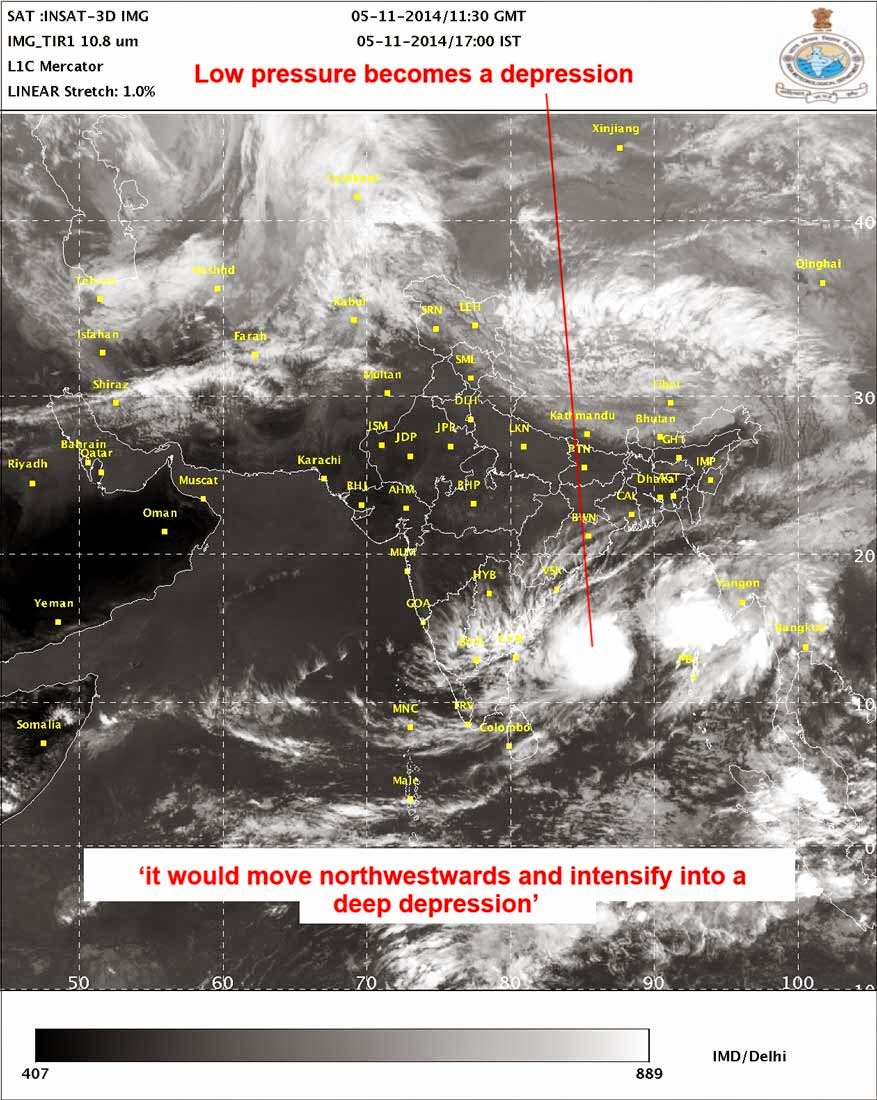 As per JTWC, 'the potential for the development of a significant tropical cyclone within the next 24hr is upgraded to medium'

Posted by SaveTheHills at 6:44 PM No comments: 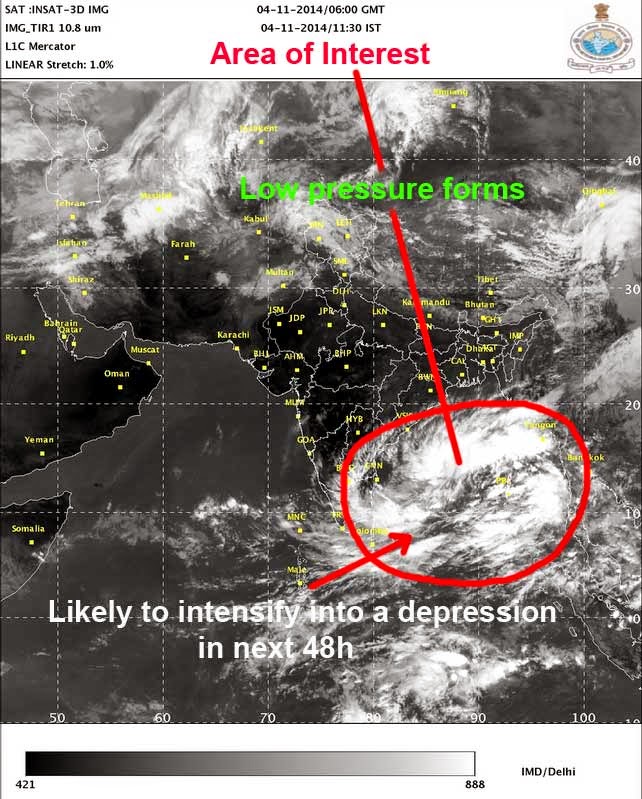 Posted by SaveTheHills at 12:46 PM No comments:

From the newspapers : Signs in groundwater may help predict earthquakes six months in advance. 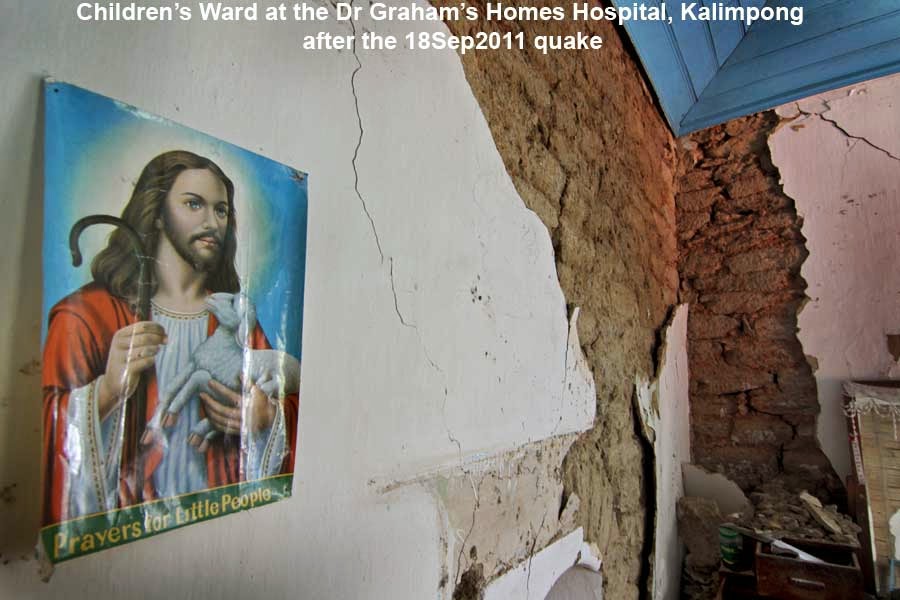 Scientists searching for a way to predict earthquakes have uncovered the most promising lead yet, after uncovering tell-tale chemical spikes in groundwater up to six months before tremors struck.
Major earthquakes can kill hundreds of thousands of people, as in Haiti in 2010, but they are the only natural disaster that cannot currently be forecast. Some experts think a useful prediction of time, place and magnitude may be an impossible dream. Previously, scientists have examined radon gas leaks, heat maps and even unusual animal behaviour as possible earthquake indicators, without success.
But now geologists taking weekly measurements of groundwater chemistry in northern Iceland over five years have discovered big shifts four to six months before two separate earthquakes in 2012 and 2013. The quakes were both significant in size – over magnitude five – and 47 miles from the sampling site.
“This does not mean we can predict earthquakes yet, but at the least we have shown something happens before earthquakes,” said Prof Alasdair Skelton, at Stockholm University, Sweden, who led the research published in Nature Geoscience. “That is tantalizing, as it means something is happening to the rocks before the earthquakes. We are highlighting groundwater chemistry as a promising target for future earthquake prediction studies.”
The fact the chemical spikes were identified before two different earthquakes is significant, said Skelton, because it indicates they are not a mere coincidence. He said the chances of that were a hundred-thousand to one. The previous best evidence for groundwater changes was an analysis of Japanese spring water bottled before and after the huge 1995 Kobe earthquake, which killed 6,400 people. The Kobe water also revealed a chemical spike, but there was too little data to make a link to the tremor statistically convincing. The chemical changes are thought to occur as stress builds on the rocks before the earthquakes and creates small fractures which connect up different acquifers allowing them to mix.
Skelton said the next steps are to understand better exactly how the chemical spikes occur and then to see if these can be observed in other parts of the world. The rock in Iceland is of only one type, basalt, and it may be that in places where there is a mix of rock types the chemical changes will be even more marked, he said.
The new work was praised by other geologists. “The potential for predicting earthquakes has great importance, and great claims require strong evidence,” writes Steven Ingebritsen, at the US Geological Survey and Michael Manga, at University of California, Berkeley, in a commentary in Nature Geoscience. “The new observations are sufficiently compelling to prompt further investigation.”
Professor Ian Main, at the University of Edinburgh, Scotland, said caution was needed and the influence of other possible factors, such as shifting magma below the ground, needed to be assessed. “There is a long way to go before observations such as these could be turned into operational tools for forecasting earthquake probabilities,” he said. “Most geophysical and geochemical signals fluctuate all the time, so it is virtually inevitable that some areas will have signals coincident with earthquakes.” The proof will be in making a successful future prediction, he said: “[Otherwise], this process is a bit like going into the bookies after a race and claiming you would have bet on the winning horse.”
Main added: “Earthquake prediction, sufficiently reliable and accurate to justify an evacuation, has long been the ‘holy grail’ of seismology and it is likely to be difficult, if not impossible, to achieve.” There are strong theoretical reasons why earthquakes may be inherently unpredictable, because large tremors can set off by relatively tiny – and therefore hard to distinguish – stresses in the rocks. But these reasons do not rule out the possibility that some reliable precursor signals may be found.
“In terms of what the public would understand by an earthquake prediction, the jury is still out,” Main said.

Posted by SaveTheHills at 10:58 AM No comments: 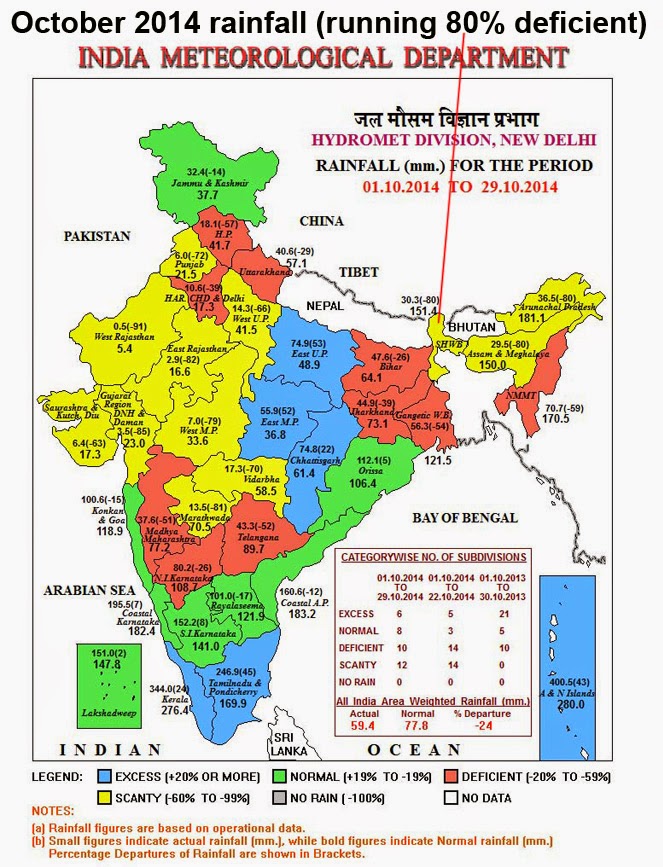 Monthly rainfall normal for the month of Oct in the Darjeeling-Sikkim Himalaya as per IMetD  is 154.2mm (see here).
No rain, means no landslides but that also means less potable water and more forest fires during the many dry months ahead. 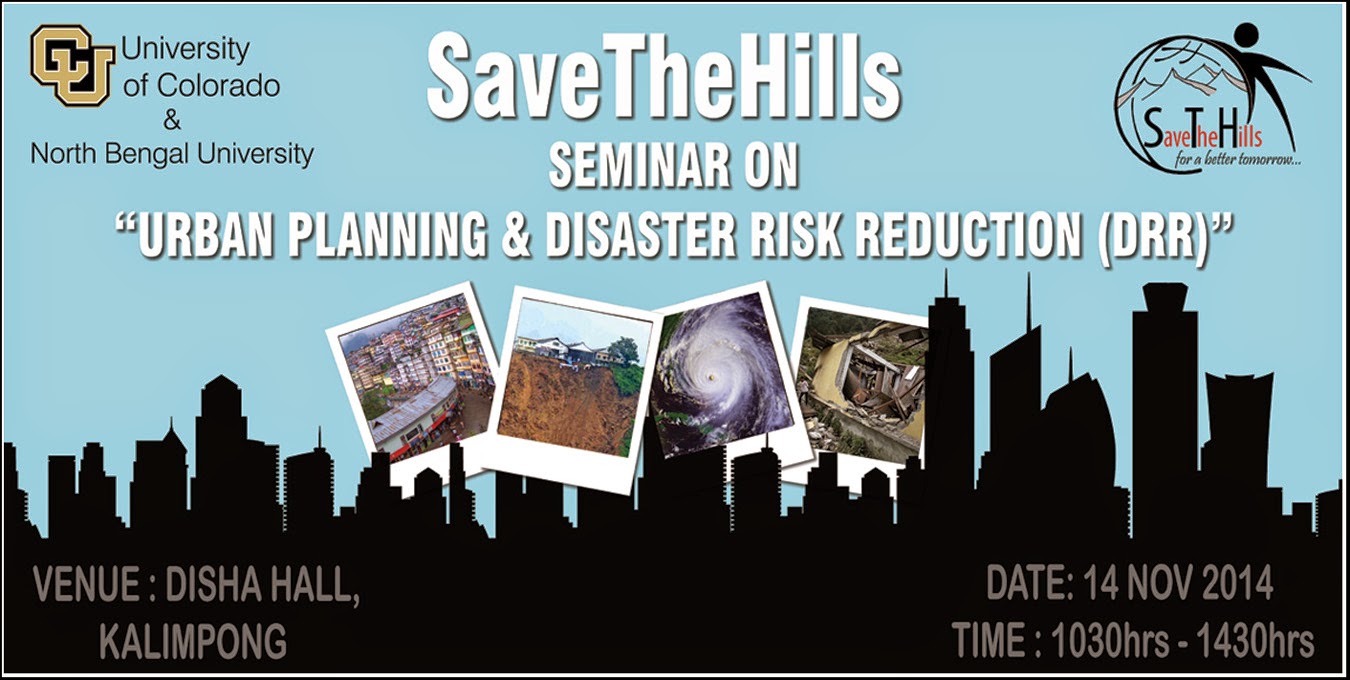 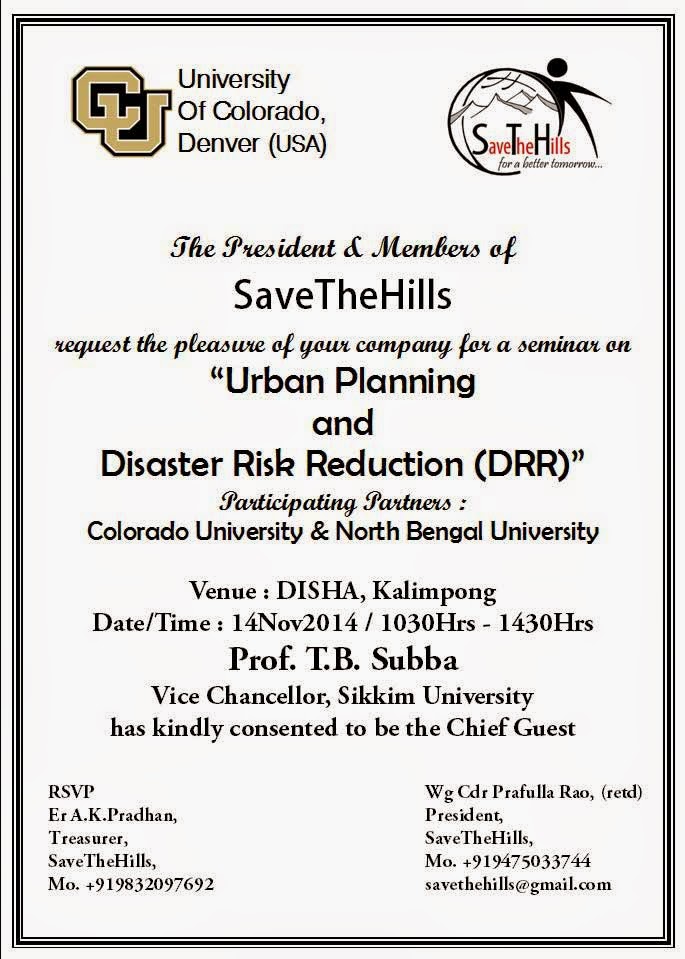 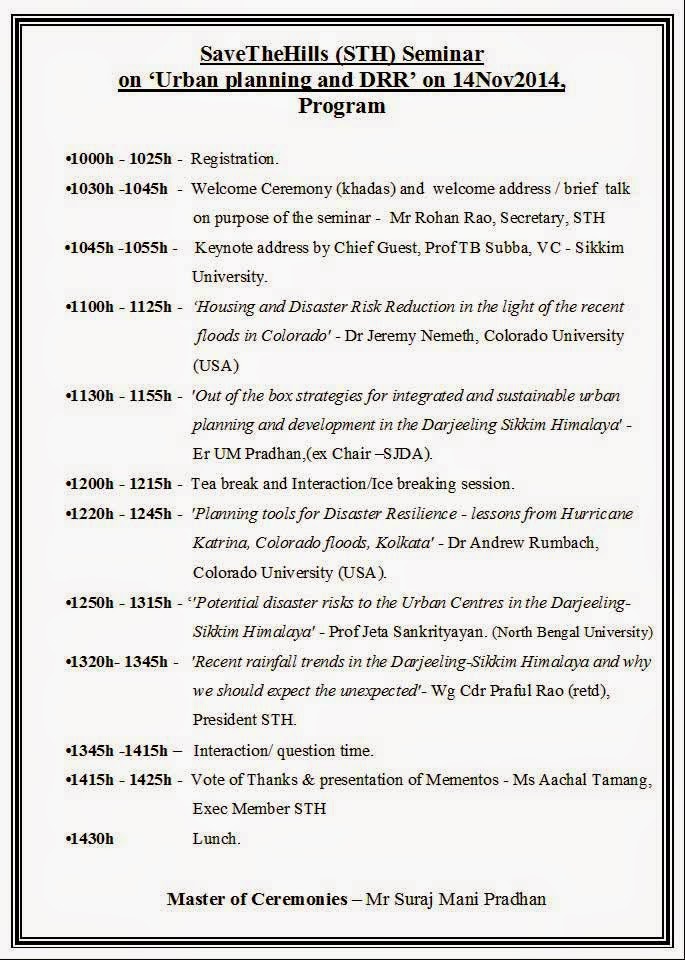 Kindly intimate us if you intend to attend the seminar and sorry, we do not have accommodation/transportation arrangements for the same.

Praful Rao,
Kalimpong,
Dist Darjeeling.
Posted by SaveTheHills at 9:09 AM No comments: