Closing Oct2019 with a bang : 3 Cyclones in the region 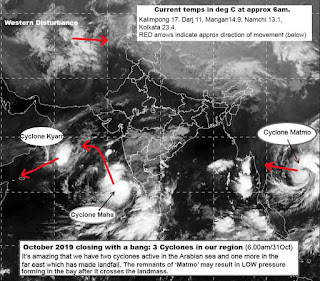 Oct 2019 for Kalimpong and Darjeeling districts has been dry. We are almost -60% in the monthly rainfall. Nevertheless, there has been plenty of weather activity elsewhere in the country with peninsular India and the western coast receiving plenty of rain.
As the curtains came down on Oct, we have 3 active storms in our region as shown above. 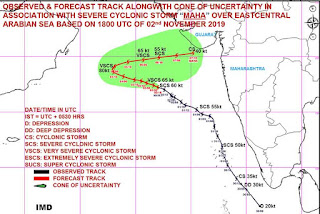 Update on 05Nov2019
Caught in a pincer movement by two storms 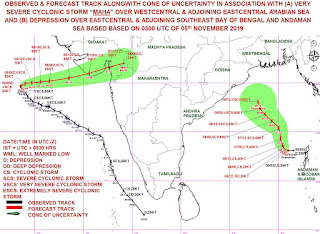 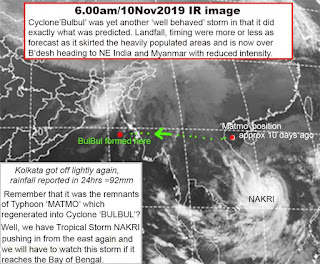 Praful Rao,
Kalimpong district
Darjeeling-Sikkim Himalaya
Posted by SaveTheHills at 10:37 AM No comments: Links to this post

Milestones in STH: Making it to the 36th International Geological Congress in Delhi in Mar2020 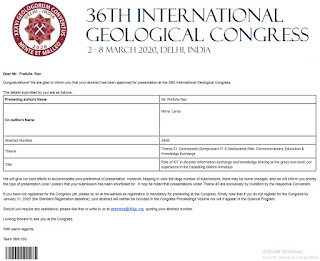 The 36th IGC, is undoubtedly the most prestigious event of its kind in the world where the best minds and scientists would congregate for the congress.
STH had submitted its abstract several days ago on the subject 'Role of ICT in Disaster Information Exchange and knowledge sharing at the grass root level: our experience in the Darjeeling-Sikkim Himalaya'.
We are very happy that our abstract has been accepted by Team 36 IGC.

Posted by SaveTheHills at 6:03 PM No comments: Links to this post

Rainfall data of Darjeeling-Sikkim Himalaya of Sep2019 and rainfall 2019 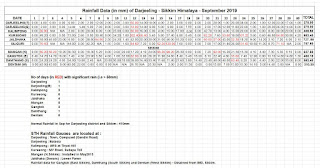 We have added Darjeeling (Batasia) station where the rainfall is being recorded by Navin bhai, an enthusiastic amateur meteorologist. 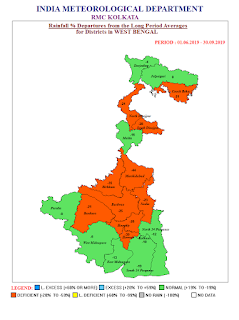 As per the above (lower) table we came to the end of the 2019 SW Monsoon season in September.

Excerpts from IMD's press release on the 2019 SW monsoon is reproduced below:
* The 2019 southwest monsoon season comes to end with above normal seasonal (June to September) rainfall. Quantitatively monsoon seasonal rainfall was 110% of its Long Period Average, which is 88 cm.
* In spite of late monsoon onset and large deficient rainfall during the month of June, the seasonal rainfall ended in above normal category with 110% of its LPA. Monsoon rainfall during July, August and September were 105%, 115% and 152% of its Long Period Average respectively.
* Other salient features of 2019 monsoon seasonal rainfall are as follows:
- After 1994 (110% of LPA), rainfall received in 2019 (110 % of LPA) is the highest
season rainfall received by the country as a whole.
- During 18 of the last 19 years (2001-2019), North-East India has received seasonal rainfall less than LPA with an exception of 2007 (110% of LPA). This indicates that the seasonal rainfall over North-East India is passing through a below normal epoch like it was during early 1950s to mid-1980s.
- After 1931, this is the first time, the seasonal rainfall is more than LPA even after the June rainfall deficiency was more than 30% of LPA.
- After 1996 (119 % of LPA) , this is the highest recorded August rainfall (115% of LPA).
- This is the second highest September rainfall (152 of LPA), after 1917 (165% of LPA).
-  After 2010, this is the first time, rainfalls during all the last three months (July to September) were above LPA.
-  The highest cumulative rainfall during August-September (130 %) has been recorded in 2019 after 1983 (142 %)
Withdrawal of Southwest Monsoon, 2019
The withdrawal of southwest monsoon is likely to commence from northwest India around 10th October, 2019 against the normal date of 01st September. The most delayed withdrawal in the past years has been recorded in 1961 (1st October 1961), followed by 30th September in 2007.
Rainfall 2019 for East and North East India 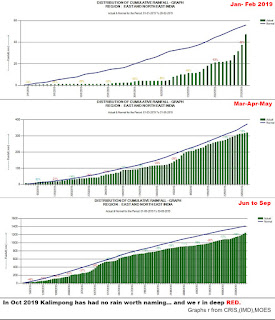 Kalimpong district
Darjeeling-Sikkim Himalaya
Posted by SaveTheHills at 5:46 PM No comments: Links to this post

An event of NOTE : Legislator's dialogue on Climate Change (02-4Oct2019) at Kalimpong 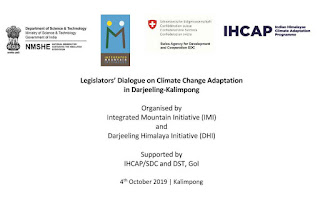 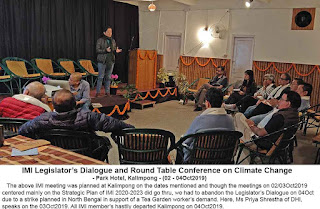 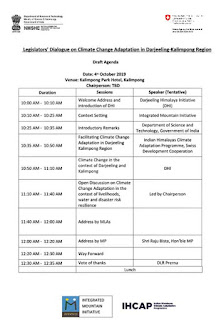 Posted by SaveTheHills at 7:53 AM No comments: Links to this post