STH activities (11Dec2017) : As a part of DHI (Darjeeling Himalaya Initiative), in a program on International Mountain Day at Darjeeling. 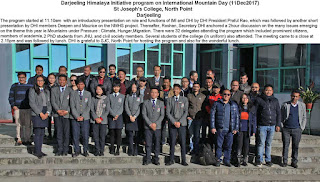 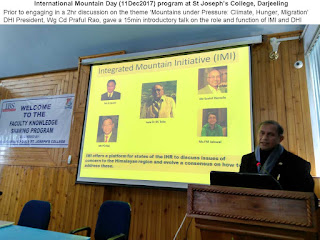 As a follow up to what was written here, Darjeeling Himalaya Initiative (of which STH is a member) conducted a one day discussion on the theme : 'Mountains under Pressure'

Posted by SaveTheHills at 7:24 PM No comments:

2017's theme for International Mountain Day on 11Dec2017 could not be more apt for the Indian Himalayan Region (IHR). It is :-

Having worked on DRR issues of this region for the past 10yrs I am acutely aware just how much stress is building up in these mountains - rainfall patterns have become oscillations between excessive rain during a few months to almost drought like conditions for the remaining parts of the year; this and huge human interference in the mountains must  surely be at least partly responsible for the immense shortage of water all along the IHR. Consequently,  agriculture is no longer a profitable vocation in the mountains which in turn impacts food production to the extent that many parts of the IHR are today totally dependent on food supply from the plains. This sets into motion the humongous migration of especially the young from rural areas to the urban landscape and from our urban centers to the metropolis and abroad in search of better futures.
As such I am extremely glad to be part of the organization team which is holding a one day talk session at my old college ie St Joseph's College North Point, Darjeeling to exchange views on this most urgent topic. 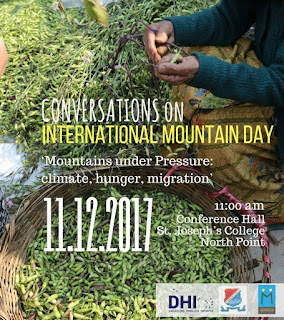 On 11Dec again, the Sustainable Development Forum of Uttaranchal (SDFU) and the GBPNIHESD are organizing the annual 'Dr RS Tolia Memorial Lecture' on the first anniversary of Dr Tolia's death. This will be held at the Regional Science Centre in Dehradun with Shri Chandi Prasad Bhatt, Padma Bhushan delivering the keynote address
Dr RS Tolia, was of course a visionary and a mountain of a man who was one of the founding fathers of the IMI.
I was fortunate to have known him, being a part of IMI.


1. Nimbong is a small village located on the eastern fringes of Kalimpong district
(BDO - 1). The gram panchayat has a population of approx 8000 but the town has a population of 2659 (Census 2011). Agriculture is the main source of livelihood here. Being located on the foothills, heavy rainfall associated with thundershowers is a normal phenomenon during the monsoons.
Nimbong is no stranger to landslides with 36 people dying in 1996 and a huge landslide being located at Central Gaon which was reported by SaveTheHills (STH) in July2009 (see STH blog of that month). While the Central Gaon landslide seems to have somewhat stabilized, another landslide seems to be wreaking havoc in Nimbong. This is the landslide at Zero.
2. Zero Landslide
The significance of the Zero landslide is :- 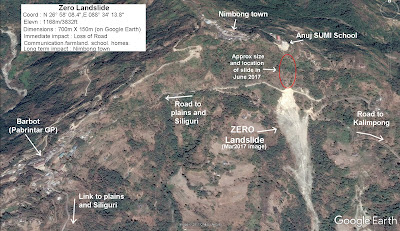 3. Brief History of Zero landslide
As per locals who were interviewed, the landslide started in 2012 as a minor ‘crack’ on the road  below the Anuj (SUMI) school. It slowly became a ‘sinking area’ and this subsidence area on the road became a full blown landslide in 2015. The landslide has been increasing in size since then and in 2016 it totally cut off Kalimpong-Nimbong-Siliguri link. This necessitated an alternate diversionary route across the slide made below the Anuj SUMI School and constructed through MNREGA. This road too was pulled down by the slide in Jun2017.
4. Probable cause
Pending a proper scientific study, inquiries made by STH reveal that:-
5. Rainfall
Lying in the foothills of North Bengal, this area receives heavy rain during the monsoons in the form of intense thundershowers. This certainly is a major trigger for landslides in this area.
Unfortunately, rainfall data of this region was not available to STH.
6. Location and dimensions of Zero landslide
Coordinates: N 26° 58' 08.4", E 088° 34' 13.8"
Elevation: 1168m/3832´
The landslide today is huge, measured on Google Earth the length from the crown (just a few meters below the school) till the base is approx 700m.
The width at the road is approx 150m.
7. Casualties and losses
Till date the landslide has not resulted in any human casualties, even though locals have reported loss of livestock. As on date five families have been relocated and along with property, livelihoods and farmland has been lost.
But the real danger posed by the slide is in the future, where this slide will:- 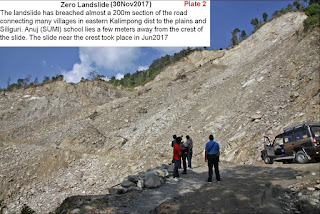 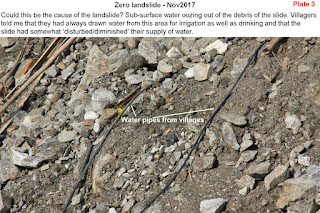 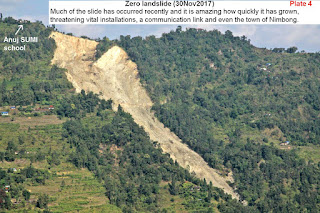 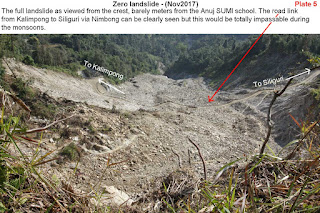 Praful Rao,
Kalimpong district
Darjeeling-Sikkim Himalaya
Posted by SaveTheHills at 7:00 AM No comments: 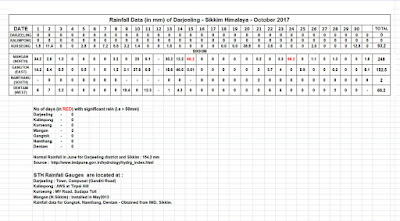