STH activities: sensitizing the Community about Cyclone 'Roanu' in the local news today 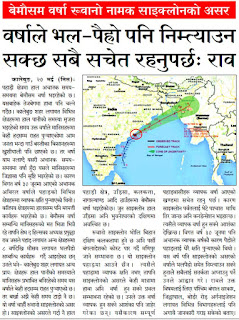 Since many people of this region were unaware about the cyclone, we had a report on Cyclone 'Roanu' published in Himalaya Darpan along with the track of the storm. Himalaya Darpan is a Nepali language newspaper which commands the largest readership amongst the local people here.
Briefly the report states that the yesterday's rainfall was not due to the SW monsoons which was still a fortnight away but due to a cyclone. We asked the community to be alert in case of possible heavy rain and ensuing landslides.

Posted by SaveTheHills at 5:11 PM